Why does the Promise constructor require a function that calls 'resolve' when complete, but 'then' does not - it returns a value instead?

As I plunge into studying Promises, my understanding has halted on the following question that I do not find discussed (all I find are specific discussions of the Promise constructor, and the Promise 'then' function - but not a discussion that compares their design patterns).

From the MDN documentation, we have this use of the Promise constructor (with my comment added):

Function object with two arguments resolve and reject. The first argument fulfills the promise, the second argument rejects it. We can call these functions, once our operation is completed.

Moving on to the then function that can be called on a Promise object (which returns a new Promise object), we have the following function signature as described by the documentation (with my comments added):

Because the then method returns a Promise, you can easily chain then calls.

From the above code snippet, it seems clear to me that the value passed to the resolve function in Stage 1 (in the second occurrence of resolve - beneath (2), above) is passed on to the next stage (the first then function that follows in the same code snippet). There is no return value at Stage 1. However, it is the return value at Stage 2 that is passed on to the next stage after that (the second then function).

Is this lack of correspondence between the design pattern for the creation of a Promise, and the use of the then function on an existing promise (which also returns a Promise), just a historical fluke (one requires calling a callback but returns nothing, and the other returns a value but does not call a callback)?

Or am I missing an underlying reason why the Promise constructor utilizes a different design pattern than the then function?

Bergi's answer is excellent, and has been very helpful to me. This answer is complementary to his. In order to visualize the relationship between the Promise() constructor and the then() method, I created this diagram. I hope it helps somebody... maybe even me, a few months months from now. 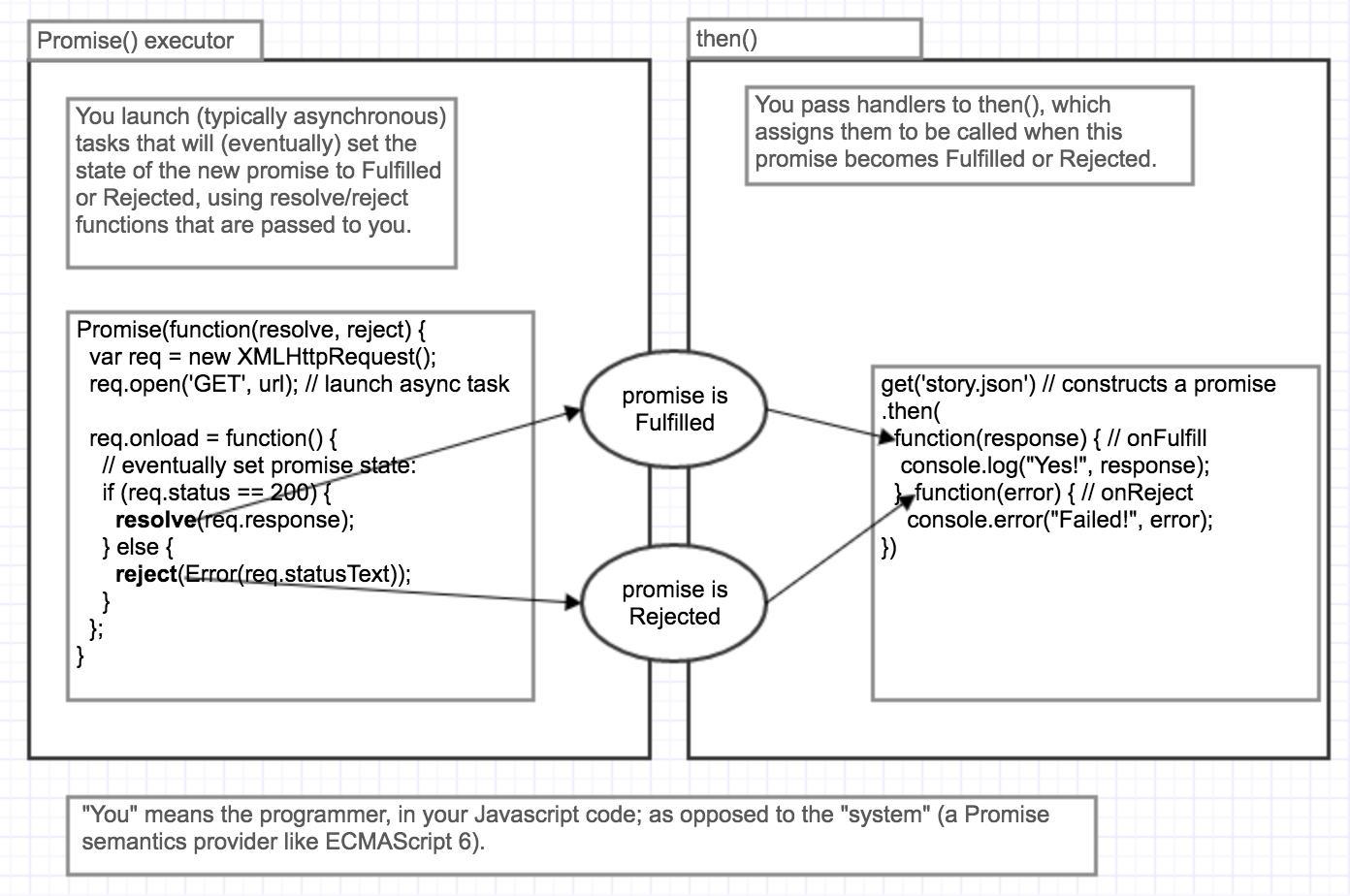 This is a highly simplified view of how things work, leaving out many important details. But I think if one can keep a grip on a good overview of the intended purpose, it will help avoid confusion when one gets into the details.

A couple of selected details

The executor is called immediately

One important detail is that the executor function passed to the Promise() constructor is called immediately (before the constructor returns the promise); whereas the handler functions passed to the then() method will not be called till later (if ever).

Bergi mentioned this, but I wanted to restate it without using the terms a/synchronously, which can be confused if you're not reading carefully: The distinction between a function calling something asynchronously vs. being called asynchronously is easy to gloss over in communication.

One more detail I'd like to emphasize, because it confused me for a while, is that the resolve() and reject() callbacks passed to the Promise() constructor's executor function are not the callbacks later passed to the then() method. This seems obvious in retrospect, but the apparent connection had me spinning in circles for too long. There is definitely a connection, but it's a loose, dynamic one.

Instead, the resolve() and reject() callbacks are functions supplied by the "system", and are passed to the executor function by the Promise constructor when you create a promise. When the resolve() function is called, system code is executed that potentially changes the state of the promise and eventually leads to an onFulfilled() callback being called asynchronously. Don't think of calling resolve() as being a tight wrapper for calling onFulfill()!

There is no correspondence between the Promise constructor and the then method because they are two independent things, designed for different purposes.

The Promise constructor is only used for promisifying1 asynchronous functions. Indeed, as you say, it is built on invoking resolve/reject callbacks to asynchronously send values, and there are no return values in that case.

That the Promise constructor itself does take this "resolver" callback (to which it synchronously passes resolve and reject) is in fact an enhancement of the older deferred pattern, and bears no intended similarity to the then callbacks.

The then callbacks in contrast are classical asynchronous callbacks, with the additional feature that you can return from them. They are being invoked asynchronously to receive values.

To sum up the differences:

That both utilise callbacks is just coincidential - not a historical fluke, but rather coadaption of a language feature.

1: Ideally, you would never need this because all natively asynchronous APIs return promises

The whole point of the promise constructor executor function is to disseminate resolve and reject functions to non-promise-using code, to wrap it and convert it to use a promise. If you wanted to limit this to synchronous functions only, then yes, a return value from the function could have been used instead, but that would have been silly since the useful part is to disseminate the resolver and reject functions to code that actually runs later (way after the return), e.g. to callbacks passed in to some asynchronous API.

Inspired by the previous answers (I'll address the part that was most confusing to me):

The resolve and reject arguments in the Promise constructor are not functions you define. Think of them as hooks that you get to embed into your async operation code (usually you resolve with success response and reject with failure reason) , so that javascript has a way to eventually mark the Promise as Fulfilled or Rejected depending on the outcome of your async operation; once that happens, the appropriate function you defined in then(fun1, fun2) is triggered to consume the Promise (either fun1(success_response) or fun2(failure_reason), depending on whether the Promise is Fulfilled/Rejected). Since fun1 and fun2 are plain old javascript functions (they just happen to take the future outcome of your async operation as arguments), they return values (which can be undefined if you don't explicitly return).

Not the answer you're looking for? Browse other questions tagged javascript promise ecmascript-6 es6-promise or ask your own question.

768
How do I convert an existing callback API to promises?
466
Aren't promises just callbacks?
340
What's the difference between returning value or Promise.resolve from then()
18
Passing another promise to a promise handler
10
Difference between resolve and return in promise JS
2
Different behaviour between 'returning a promise' and 'resolving with promise' inside a `new`-generated promise
1
Breaking a promise chain
0
Why does return not resolve in this case?

1758
Why does ++[[]][+[]]+[+[]] return the string “10”?
178
Angular HttpPromise: difference between `success`/`error` methods and `then`'s arguments
64
Basic Javascript promise implementation attempt
171
Is it bad practice to have a constructor function return a Promise?
351
Resolve Javascript Promise outside function scope
112
Why does javascript ES6 Promises continue execution after a resolve?
2
difference between resolve and onFulfilled
0
Chain promises - returned promise resolve does not cause then method to be invoked