I've tried the suggestion from fadden to mirror the Android screen to PC, but the vlc player screen show nothing: 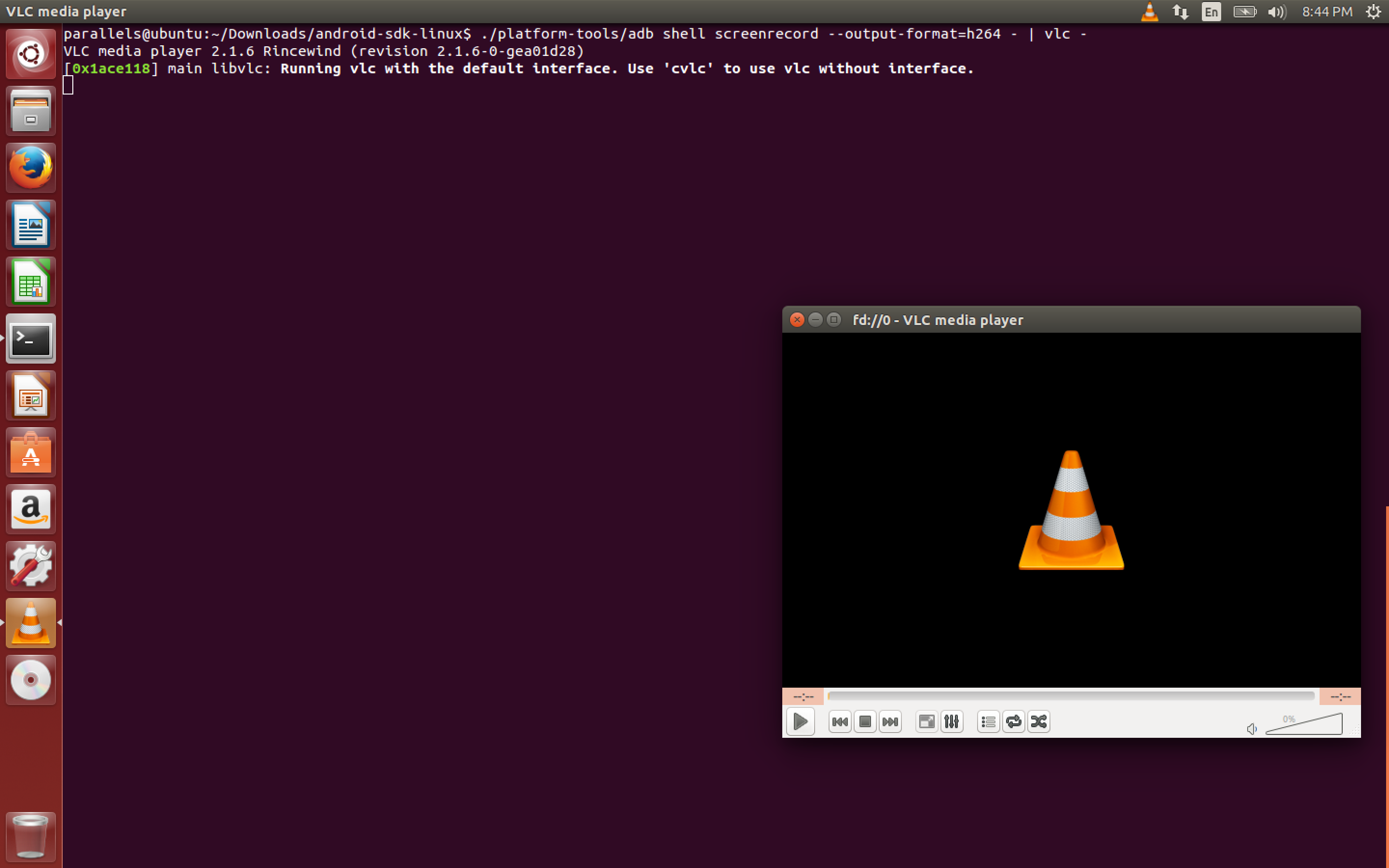 What would be the correct commands lines for this function? Thanks.

Since vlc can't play the h264 file from adb std output, I turn to use ffplay as stream player and it works via the following command: 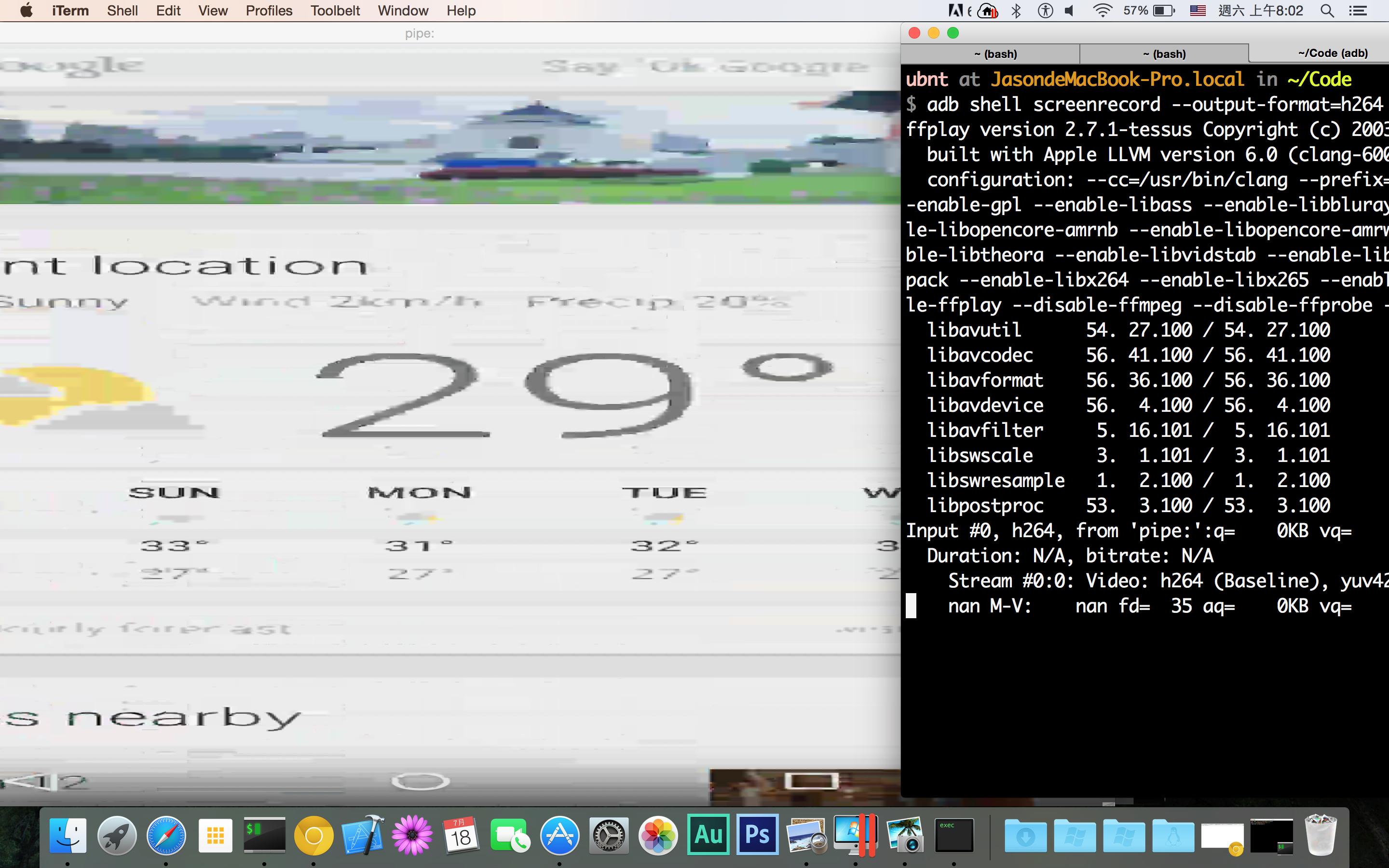 I don't remember the vlc command line that I used for the initial testing. I've tried a few different things recently, on desktop Linux (Ubuntu 15.10).

If you just pipe the output into vlc --demux h264 -, it appears to work, but you get gradually farther behind. Adding --h264-fps=60 seems to help that, but you start getting errors ("ES_OUT_SET_(GROUP_)PCR is called too late"). Adding --clock-jitter=0 seems to make the errors less traumatic, but it's still pretty messed up.

A simple ffplay - works, but it seems to take a few seconds to decide to start, and ends up lagging well behind the entire time.

Using ffplay -framerate 60 -framedrop -bufsize 16M - gives you a decent quality that lasts for quite a while. This is due to the below command that synchronises the framerate and bitrate as the video will otherwise be trying to play at 30fps making everything look/get slower over time due to the extra frames. The bitrate will then help keep the video properly timed as best as possible. I've found it works within a 100-1000MS delay; similarly to most Bluetooth headsets. You might get a "consider increasing probesize" error that may freeze the stream. It's best to restart screenrecord or try appending -probesize 16M

Note: This configuration with ffplay works with the following adb command piped beforehand. If you're running GPU intensive tasks or using an older phone, a size of 1280x720 is a better recommendation. If your phone doesn't support 60fps (or doesn't seem to record in 60fps) change until appropriate with values such as 30 or 24.

Based on the answers above I have tried every possible combination and there is only one that is does not lag a lot, does not stop and has a decent video quality, with ffplay:

The size parameter can be changed to anything.

Note this is still far from perfect, but gets the work done and I also tried it over WiFi and it was good enough.

For the low latency playback, the mplayer worked the best so far.

Note: the above sets the mplayer to consume frames as soon as possible. Though, as a result, the playback window may be sluggish when waiting for new frames.

The screenrecord has a 3 minutes time limit "feature". If you feel comfortable with recompiling it from code, here is a good link.

After recompiling the screenrecord:

Using any of the adb shell commands produced corrupted data for me. Using adb exec-out, as noted by lord-ralf-adolf in a comment on the accepted answer, fixed the problem.

I used this exact command to get optimal video quality and minimal lag from a Galaxy S6:

I found that the lowest latency playback can be achieved by:

I found this software (for linux, windows and mac) that allows you to mirror and control your device connected via adb:

Best results for me with mpv:

74
Read binary stdout data like screencap data from adb shell?
55
How to minimize the delay in a live streaming with ffmpeg
14
How to increase time limit of ADB screen record of Android Kitkat
19
How to stream Android Phone Screen to the PC
0
Android, Native OpenGL/OpenMAX, Screen capture
0
compress adb screencap on python
1
Mirroring an android device to an android tv box with ADB

2845
How can I save an activity state using the save instance state?
1155
Fling gesture detection on grid layout
1951
How to get screen dimensions as pixels in Android
1240
Is quitting an application frowned upon?
1136
How to make links in a TextView clickable
1168
Android "Only the original thread that created a view hierarchy can touch its views."
3959
Proper use cases for Android UserManager.isUserAGoat()?
1614
Android 8: Cleartext HTTP traffic not permitted