Attempt to install Qt on OS X gives 'You need to install Xcode 5.0.0', but this version is so old it's not available

I am a Windows/Linux developer who occasionally builds for OS X - particularly in Qt.

I have a simple Qt project that I have been developing on Windows. I now wish to build it on OS X.

I am running Yosemite. I have installed Xcode 7 and am attempting to install Qt 5.5.

When I run the Qt installer, immediately after the prompt to log in to Qt (which is successful), I receive the following error:

You need to install Xcode version 5.0.0. 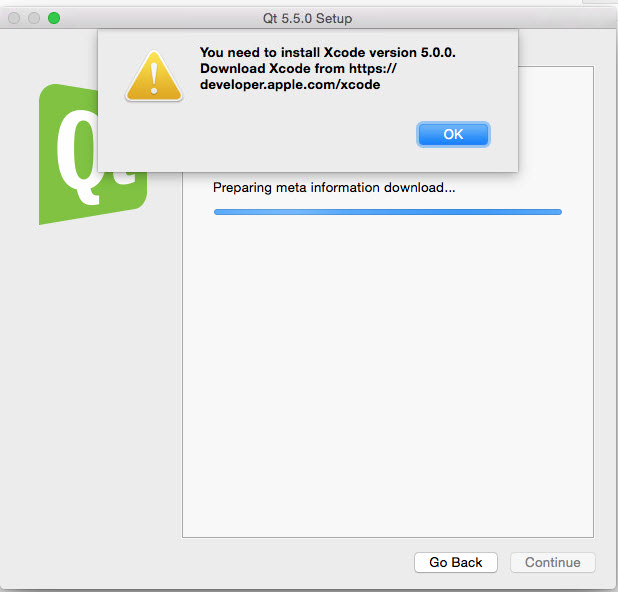 I have attempted to locate Xcode 5.0.0 on the Apple Developer site, but this is 2 major versions behind the most recent version, and I cannot even find an installer for it.

More to the point, I do wonder why the most recent version of Qt requires a version of Xcode that is considered so old by Apple that it's not even available.

How do I overcome this problem so that I can get Qt installed on OS X?

I ran into the same problem and solved it by following the instructions here. This link describes a similar, but slightly different installer issue.

To summarize, you need to ensure that the Xcode command line tools are installed and set up correctly. I already had them installed, but had to go into Preferences -> Locations in Xcode and set the dropdown to the currently installed version.

The link shows an earlier version of Xcode where the path is actually Preferences -> Downloads -> Components.

Once I'd made this change, the installer continued successfully.

The solution that worked for me (on OSX Sierra XCode 8.2.1) is to open XCode Preferences -> Locations.

taken from the link above, this resolved my issue:

For me closing the prompt and smashing keys (alt F4, I know that its not windows) before the next prompt opened worked... qt is running fine now, as it doesn't need the old version.

you can find the old version of XCode on the the Apple offical site here and download .dmg of xcode 5 or 6.1 for example :

Not the answer you're looking for? Browse other questions tagged xcode macos qt osx-yosemite or ask your own question.

177
Can I have multiple Xcode versions installed?
158
iPhone Debugging: How to resolve 'failed to get the task for process'?
198
How to install a specific JDK on Mac OS X?
209
Xcode 4 - “Valid signing identity not found” error on provisioning profiles on a new Macintosh install
125
Xcode doesn't see my iOS device but iTunes does
287
OS X Framework Library not loaded: 'Image not found'
885
Xcode error “Could not find Developer Disk Image”
2
Xcode can’t be installed on “Macintosh HD” because macOS version 10.13.6 or later is required