I'm programming an application with the latest version of Spring Boot. I recently became problems with growing heap, that can not be garbage collected. The analysis of the heap with Eclipse MAT showed that, within one hour of running the application, the heap grew to 630MB and with Hibernate's SessionFactoryImpl using more than 75% of the whole heap. 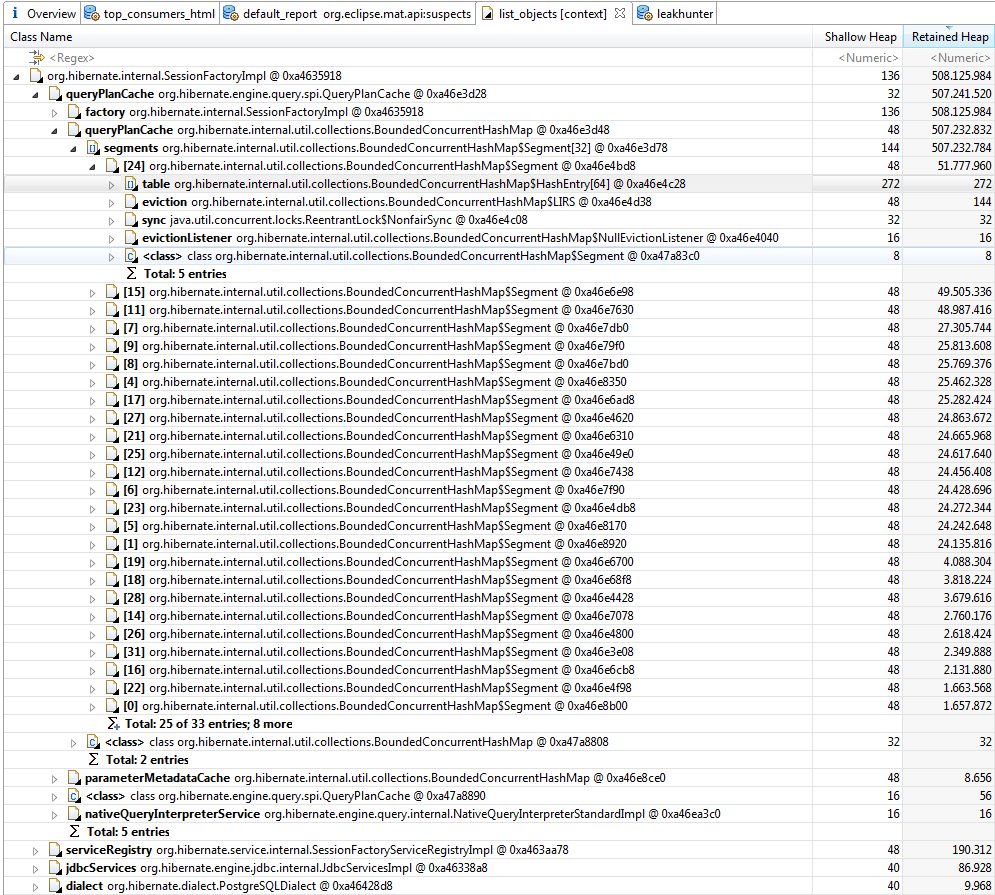 Is was looking for possible sources around the Query Plan Cache, but the only thing I found was this, but that did not play out. The properties were set like this:

The database queries are all generated by the Spring's Query magic, using repository interfaces like in this documentation. There are about 20 different queries generated with this technique. No other native SQL or HQL are used. Sample:

as example for IN usage.

Question is: Why does the query plan cache keep growing (it does not stop, it ends in a full heap) and how to prevent this? Did anyone encounter a similar problem?

I've hit this issue as well. It basically boils down to having variable number of values in your IN clause and Hibernate trying to cache those query plans.

There are two great blog posts on this topic. The first:

Using Hibernate 4.2 and MySQL in a project with an in-clause query such as: select t from Thing t where t.id in (?)

Hibernate caches these parsed HQL queries. Specifically the Hibernate SessionFactoryImpl has QueryPlanCache with queryPlanCache and parameterMetadataCache. But this proved to be a problem when the number of parameters for the in-clause is large and varies.

These caches grow for every distinct query. So this query with 6000 parameters is not the same as 6001.

The in-clause query is expanded to the number of parameters in the collection. Metadata is included in the query plan for each parameter in the query, including a generated name like x10_, x11_ , etc.

Imagine 4000 different variations in the number of in-clause parameter counts, each of these with an average of 4000 parameters. The query metadata for each parameter quickly adds up in memory, filling up the heap, since it can't be garbage collected.

This continues until all different variations in the query parameter count is cached or the JVM runs out of heap memory and starts throwing java.lang.OutOfMemoryError: Java heap space.

Avoiding in-clauses is an option, as well as using a fixed collection size for the parameter (or at least a smaller size).

For configuring the query plan cache max size, see the property hibernate.query.plan_cache_max_size, defaulting to 2048 (easily too large for queries with many parameters).

And second (also referenced from the first):

Hibernate internally uses a cache that maps HQL statements (as strings) to query plans. The cache consists of a bounded map limited by default to 2048 elements (configurable). All HQL queries are loaded through this cache. In case of a miss, the entry is automatically added to the cache. This makes it very susceptible to thrashing - a scenario in which we constantly put new entries into the cache without ever reusing them and thus preventing the cache from bringing any performance gains (it even adds some cache management overhead). To make things worse, it is hard to detect this situation by chance - you have to explicitly profile the cache in order to notice that you have a problem there. I will say a few words on how this could be done later on.

So the cache thrashing results from new queries being generated at high rates. This can be caused by a multitude of issues. The two most common that I have seen are - bugs in hibernate which cause parameters to be rendered in the JPQL statement instead of being passed as parameters and the use of an "in" - clause.

Due to some obscure bugs in hibernate, there are situations when parameters are not handled correctly and are rendered into the JPQL query (as an example check out HHH-6280). If you have a query that is affected by such defects and it is executed at high rates, it will thrash your query plan cache because each JPQL query generated is almost unique (containing IDs of your entities for example).

The second issue lays in the way that hibernate processes queries with an "in" clause (e.g. give me all person entities whose company id field is one of 1, 2, 10, 18). For each distinct number of parameters in the "in"-clause, hibernate will produce a different query - e.g. select x from Person x where x.company.id in (:id0_) for 1 parameter, select x from Person x where x.company.id in (:id0_, :id1_) for 2 parameters and so on. All these queries are considered different, as far as the query plan cache is concerned, resulting again in cache thrashing. You could probably work around this issue by writing a utility class to produce only certain number of parameters - e.g. 1, 10, 100, 200, 500, 1000. If you, for example, pass 22 parameters, it will return a list of 100 elements with the 22 parameters included in it and the remaining 78 parameters set to an impossible value (e.g. -1 for IDs used for foreign keys). I agree that this is an ugly hack but could get the job done. As a result you will only have at most 6 unique queries in your cache and thus reduce thrashing.

So how do you find out that you have the issue? You could write some additional code and expose metrics with the number of entries in the cache e.g. over JMX, tune logging and analyze the logs, etc. If you do not want to (or can not) modify the application, you could just dump the heap and run this OQL query against it (e.g. using mat): SELECT l.query.toString() FROM INSTANCEOF org.hibernate.engine.query.spi.QueryPlanCache$HQLQueryPlanKey l. It will output all queries currently located in any query plan cache on your heap. It should be pretty easy to spot whether you are affected by any of the aforementioned problems.

As far as the performance impact goes, it is hard to say as it depends on too many factors. I have seen a very trivial query causing 10-20 ms of overhead spent in creating a new HQL query plan. In general, if there is a cache somewhere, there must be a good reason for that - a miss is probably expensive so your should try to avoid misses as much as possible. Last but not least, your database will have to handle large amounts of unique SQL statements too - causing it to parse them and maybe create different execution plans for every one of them.

I have same problems with many(>10000) parameters in IN-queries. The number of my parameters is always different and I can not predict this, my QueryCachePlan growing too fast.

For database systems supporting execution plan caching, there's a better chance of hitting the cache if the number of possible IN clause parameters lowers.

Fortunately Hibernate of version 5.3.0 and higher has a solution with padding of parameters in IN-clause.

If you want to activate this feature, you need to set this property to true hibernate.query.in_clause_parameter_padding=true.

I had the exact same problem using Spring Boot 1.5.7 with Spring Data (Hibernate) and the following config solved the problem (memory leak):

Starting with Hibernate 5.2.12, you can specify a hibernate configuration property to change how literals are to be bound to the underlying JDBC prepared statements by using the following:

From the Java documentation, this configuration property has 3 settings

I had a big issue with this queryPlanCache, so I did a Hibernate cache monitor to see the queries in the queryPlanCache. I am using in QA environment as a Spring task each 5 minutes. I found which IN queries I had to change to solve my cache problem. A detail is: I am using Hibernate 4.2.18 and I don't know if will be useful with other versions.

We also had a QueryPlanCache with growing heap usage. We had IN-queries which we rewrote, and additionally we have queries which use custom types. Turned out that the Hibernate class CustomType didn't properly implement equals and hashCode thereby creating a new key for every query instance. This is now solved in Hibernate 5.3. See https://hibernate.atlassian.net/browse/HHH-12463. You still need to properly implement equals/hashCode in your userTypes to make it work properly.

I had a similar issue, the issue is because you are creating the query and not using the PreparedStatement. So what happens here is for each query with different parameters it creates an execution plan and caches it. If you use a prepared statement then you should see a major improvement in the memory being used.

We had faced this issue with query plan cache growing too fast and old gen heap was also growing along with it as gc was unable to collect it.The culprit was JPA query taking some more than 200000 ids in the IN clause. To optimise the query we used joins instead of fetching ids from one table and passing those in other table select query..

Not the answer you're looking for? Browse other questions tagged spring hibernate postgresql spring-boot or ask your own question.

7
High memory usage when using Hibernate
3
What is the better approach for solving Restrictions.in with large lists?
2
OutOfMemoryException loading data via JPA: Need help analyzing
0
Why does hibernate execute sql in clauses on initialisation