I run git command npm outdated in bash on a mac.

See the output in the image below.

Does anyone know why the first four packages are printed in red?

I guess it's because I have them pointing to github repos in my package.json, but why the red?

Is it a warning? Should I worry? 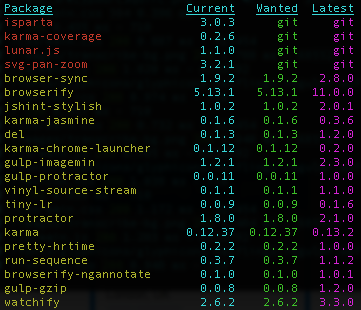 You have to be careful when depending on packages that are Github-hosted: if you're just pointing to the master branch of a package (which is the default when adding such dependencies), you can get in all sorts of trouble when that branch is updated and it's either not functional (it happens) or it breaks backward compatibility (that happens too).

I think this is what npm is trying to tell you.

FWIW, you should always include an identifier to a particular commit/tag/sha when you're dealing with Github-hosted dependencies. See this for more documentation. Although I doubt that npm won't also mark these URL's as red, because it's still possible for any of those identifiers to get invalidated.

EDIT: perhaps not quite.

Looking at it a little closer, it'll show the package name in red if the installed version doesn't (semver-)match the required version as set in package.json. In case of Github-hosted packages these will probably never match, hence the red.

Yellow is used when the installed version matches the required version, but there's a more recent version available in the NPM repository.

All packages in red should be upgraded first, then upgrade ones in yellow, because of the possibility of breaking change.

Unlike the answers above, all outdated packages can be updated. This is a project specific upgrade policy decision.

Not the answer you're looking for? Browse other questions tagged node.js git bash npm or ask your own question.

1161
Where does npm install packages?
1814
How can I update NodeJS and NPM to the next versions?
2477
Find the version of an installed npm package
1269
How can I uninstall npm modules in Node.js?
1366
How to fix npm throwing error without sudo
1819
What is the difference between Bower and npm?
2312
What's the difference between dependencies, devDependencies and peerDependencies in npm package.json file?
2473
What is the --save option for npm install?
1822
Do I commit the package-lock.json file created by npm 5?