IntelliSense is not working in SQL Server Management Studio

We use SQL Server Management Studio 2008 R2. IntelliSense works with SA account perfectly. But it is not working with Windows Authentication user. The user has access master db with db_owner role but it's not sysadmin.

How do I fix this issue?

You can try solution from these questions1 or questions2 and questions3.
Or please try these steps as below:

This may seem too short of an answer, but probably it's the solution to your Problem:

Missing from other solutions, but fixed it for me:

Turning Query > SQLCMD Mode on and off again fixed the issue for me in SSMS 18.1, even though it was never enabled to begin with.

After trying all the answers here to no avail and giving up, I remained curious about the SQLCMD Mode mentioned in Chow Lover's answer. I turned it on to see what it did, but noticed no change so turned it off again. Intellisense suddenly awoke and has been working fine since.

My schemes were too big. I had to do this:

For me, the solution was to increase SQL Server Minimum memory per queryy (in KB). It was set to 1024 KB(1M). I increased it to 100 MB then it solved my problem.

Please do not make this kind of changes without consulting your DBA and not knowing the resources available on that server. It basically, will allocate that amount of space for every new query window you will open. So, if you set too many users then you have low memory server and you set to something higher then your server might crash. 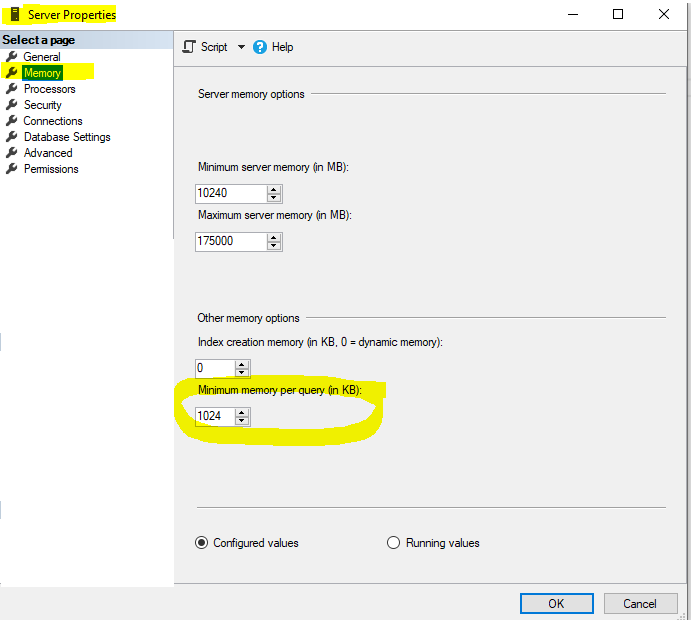 I tried all the above/below suggestions... and nothing worked.

But the one thing that finally (in an act of desparation where I'd try anything ... even the stupidest idea ever suggested...) that finally... DID WORK was:

I opened a new query tab. Copied my code from the script file I had open, Pasted it into the new query tab. And proceeded to be stunned in horror as intellisense began working again.

Sometimes I just want to bang my head againt the desk.

Hope this tid bit helps someone. :)

P.S. Yes... I waited a while after each of the failed attempts to make sure intellisense wasn't taking it's good ole time trying to find itself. The "New Query Tab" insanity worked instantly.

I fixed this in 2 simple steps: 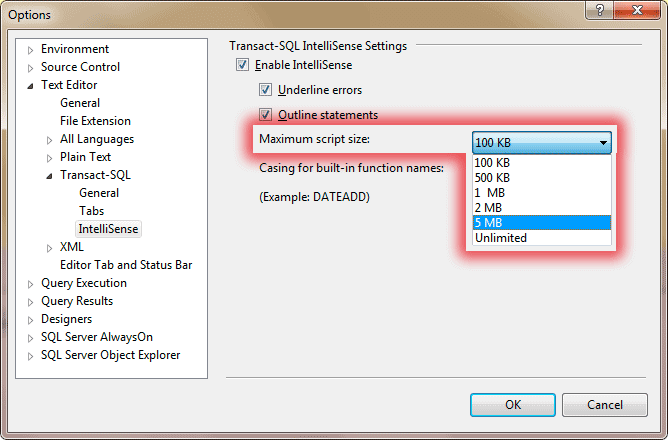 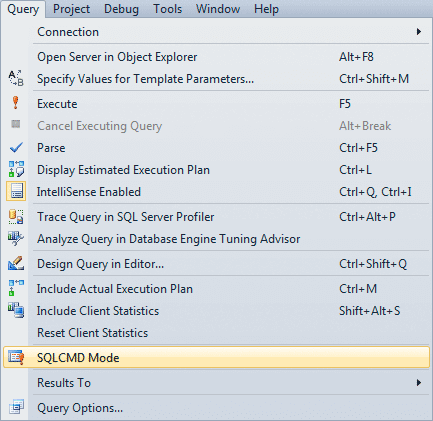 It could also depends on your destination server.

For instance for server 2005, intellisense will not work. Here is a command to check this :

If version begin with 8 or 9 it will not work.

After installing visual studio or upgrading that, this issue can happen follow the link : what is the problem of IntelliSense in sqI ntelliSense and for solve that you can do this: update sql server by updating to the latest version you can get your solution.

If you have are seeing your text in red color, and have a bunch of statements, it could be because of a missing quote. Or a bad syntax check. Try typing a quote at the end. Then Intellisense should kick in again in your next statement.

Not the answer you're looking for? Browse other questions tagged sql-server sql-server-2008-r2 ssms or ask your own question.