Well, I'd like to replace specific texts based on text, yeah sounds funny, so here it is.

The problem is how to replace the tab-separated values. Essentially, what I'd like to do is replace the matching vocabulary string found on the sentence with {...}.

The value before the tab \t is the vocab, the value after the tab is the sentence. The value on the left of the \t is the first column, to its right is the second column

TL;DR Version (English Version)
Essentially, I want to replace the text on the second column based on the first Column.

ABCD is the first column here and 19475ABCD_97jdhgbl is the second one.

If you don't get the context of the Long Version below, solving this ABCD problem would be fine by me. I think it's quite a simple code but given that it's been about 4 years since I last coded in C and I've only recently started learning python, I can't do it.

For Case 1 and Case 2 it has to be exact matches, especially for kana because otherwise it might replace other kana in the sentence. The coding for Case 3 has to be different (see next).

3. Case 3: (for mixed Kana and Kanji)
This is the most complex one. For this one, I'd like the script/solution to change only the matching strings, i.e., it will ignore what doesn't match and only replace those with found matches. What it does is it takes the longest possible match and replace accordingly.
上げる \t 彼は荷物をあみだなに上げた。
would become
上げる \t 彼は荷物をあみだなに{...}た。

So, Ideally the solution should take the longest string found in both columns, in this case it is 上げ, so this is the only string replaced with {...}, while it leaves た.

I'm actually using this for Anki.

I could use excel or notepad++ but I don't think they could replace text based on placeholders.

My goal here is to create pseudo-cloze sentences that I can use as hints hidden in a hint field only to be used for ridiculously hard synonyms or homonyms (I have an Auditory card).

I know I'm missing a fourth case, i.e., pure kana with the possibility of a sentence having changed its tense, hence its spelling. Well, that'd be really hard to code so I'd rather do it manually so as not to mess up the other kana in the sentence.

Update
I forgot to say that the text is contained in a .txt file in this format:

There are about 7000 lines of those things so it has to check the replacements for every line.

Code works, thanks, just a minor bug with sentences including non-full replacements, it creates broken characters. 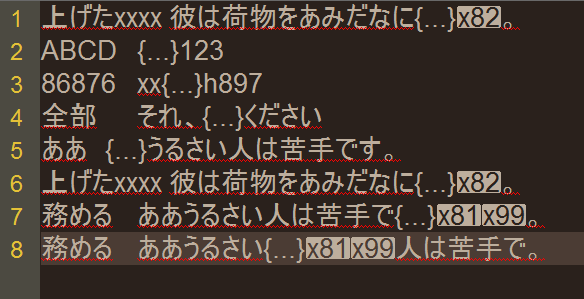 Just edited James' code a bit for testing purposes (I'm using this edited version to check what kind of strings would throw off the code. So far I've discovered that spaces in the vocabulary could cause some trouble.

This regex should deal with the cases you are looking for (including matching the longest possible pattern in the first column):

You can then go on to use the match groups to make the specific replacement you are looking for. Here is an example solution in python:

707
Find and Replace Inside a Text File from a Bash Command
793
Strip HTML from Text JavaScript
870
Difference between text and varchar (character varying)
845
Print string to text file
1269
How to read a text file into a string variable and strip newlines?
879
How to remove text from a string?
483
Regular expression search replace in Sublime Text 2
7
Use regex to find text NOT between two characters
0
regular expression for extracting some data from a text file