How to create a document from an Xml string

I would like to transform a xml string (herself constructed from byte array with an external tool.

My document and my input string was all of them created with the same xsd I read the string with pub.string:stringToBytes then I obtain an XmlNode from pub.xml:xmlStringToXMLNode

I would after that create a document, call it Doc. I call pub.xml:xmlNodeToDocument. But the document returned is not in the correct type. I mean that all datas are correct with correct name, but when I tried to map some data to another document, it never works.

I know it's not clear, sorry for that. So, in details, I have a simple xsd :

And a correspondant xml string conforming to this xsd :

A document generated with the same xsd : 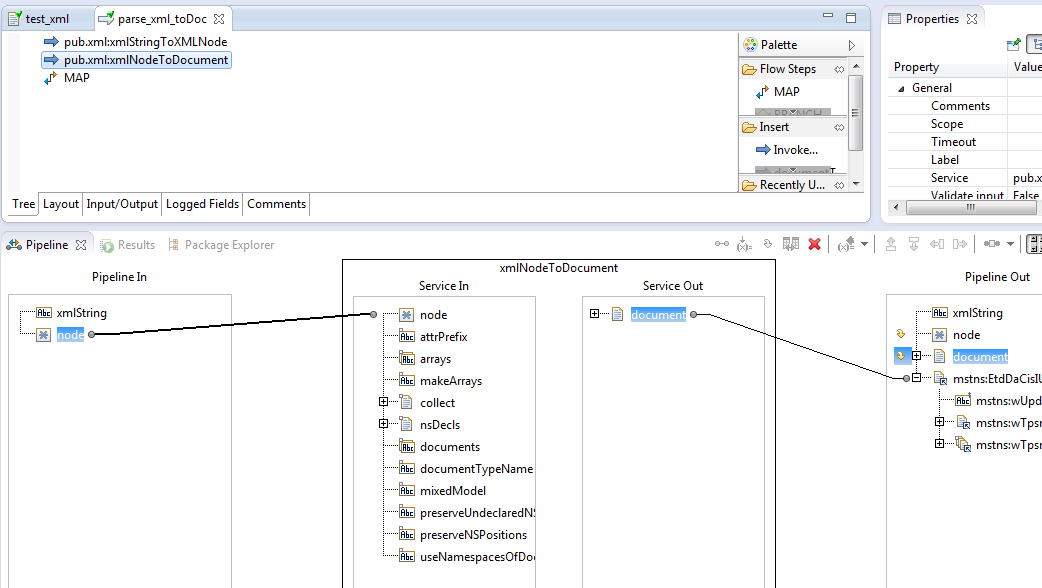 It seems to works but it is not. If I add a simple map, it was never processed :

The pipeline in result never contains the value of the last map. After using debug mode, i understand that the resulting document of pub.xml:xmlStringToXMLNode is not the same type of my doc. 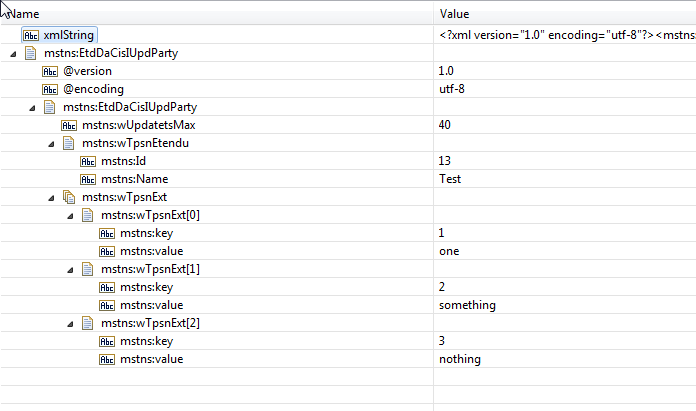 The Id string in the pipeline out is missing.

What's wrong with my understanding and with my example ?

The answer to your question is in the subtle differences of the mstns:EtdDaCisIUpdParty variable's data structure between your 2nd and 3rd screenshots:

Versus your 3rd screenshot, which shows the actual data structure at run-time:

Notice the extra level in the run-time structure, which contains the XML prolog attributes @version and @encoding and a child document called mstns:EtdDaCisIUpdParty representing the root node of your XML document.

Because document is a dynamic structure (its structure is known only at run-time since it depends on the XML it parses), you will need to manually create an IData document called mstns:EtdDaCisIUpdParty as a child underneath document in the Service Out pipeline of the call to pub.xml:xmlNodeToDocument, and then map from that instead:

Also, I would recommend that you set the following input parameters in your call to pub.xml:xmlNodeToDocument, so that all XML documents are consistently parsed:

And to defend against your service being called with unexpected/unsupported XML documents, you should probably invoke pub.schema:validate to ensure the XML is well-formed and valid against the XSD you provided above, or similar.

Not the answer you're looking for? Browse other questions tagged xml webmethods or ask your own question.

484
How to Deserialize XML document
950
What characters do I need to escape in XML documents?
1045
How do I parse XML in Python?
808
How do I comment out a block of tags in XML?
1042
What does <![CDATA[]]> in XML mean?
2155
How do you parse and process HTML/XML in PHP?
4
XML + Schema + Namespaces. No matching global declaration available for the validation root
4
Creating an XML element with xsi:nil and attributes in .Net/Jaxb
1
Error While Creating Schema from XSD file and Validating it