Why does wrapping an exception still request try-catch even when adding a throws?

I'm making use of SikuliX's API within my own personal library. The idea is to reference my library alone in external projects which incorporates the parts of SikuliX that I require.

Which seemed to make sense. However, when attempting to use a throws statement in one of the methods:

I still get an Unhandled exception type FindFailed warning. Changing it back to the original org.sikuli.script.FindFailed will of course work, however making use of try-catch in an external project will require me to re-add the relevant SikuliX jar file.

What I would like to do, is simply wrap the FindFailed exception that is being thrown by SikuliX and use it internally and externally with my library.

The primary goal of all of this is to wrap around another API with my own additional methods and such, so that when I reference this library, the later projects don't have to reference SikuliX's jar as well.

As is it right now, I require to do the following:

So far I've changed things as follows which seems to work.

I now don't extend any third party Exceptions. And instead I proceed by doing the following:

You do this by wrapping all the calls in SikuliX their own interfaces. I don't know SikuliX, so I'll make a toy example.

Okay, so you want to wrap this functionality without depending on their library.

Then, when you need their behavior, you can use your own implementation:

Note that MyException should not extend third.party.library.ThirdPartyException, because that won't help your problem; it should use the Exception(Throwable cause) constructor and remove it from the org.sikuli.script class hierarchy.

The bottom line, though, is that you still have to include the code included in SikuliX somehow. This is why tools like Maven exist, so that adding the reference to jars is very easy. For example, if your jar is dependent on SikuliX, then when you tell your new project to use your jar, it will automatically include the SikuliX reference without you having to do anything. You end up with dependency trees like this, which automatically do all this work for you: 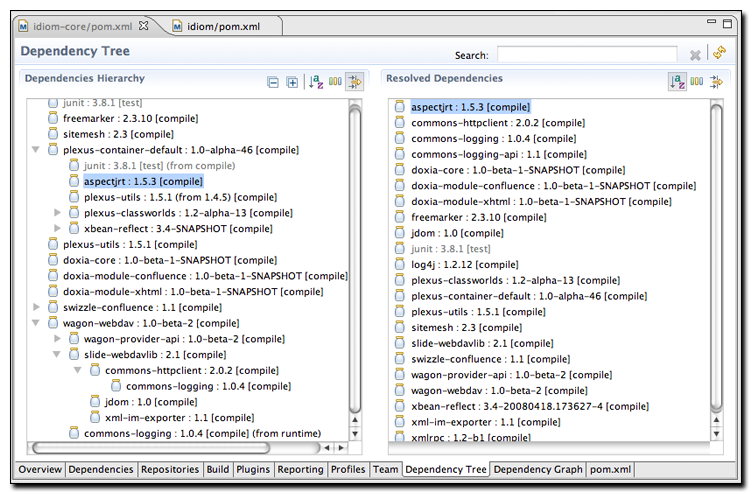 I personally use Maven but there are other options like Ivy and Gradle that do the same thing - I'm not trying to advocate for any particular tool here, just advocating for using any dependency tool.

Extending from classes you don't own is never a good idea and should be avoided. Besides, it would make whoever handles your exception still have the jar that contains org.sikuli.script.FindFailed.

A better approach would be wrapping the exception like this:

Not the answer you're looking for? Browse other questions tagged java exception or ask your own question.

49
Why is .NET exception not caught by try/catch block?
364
Difference between using Throwable and Exception in a try catch
451
Why should I not wrap every block in "try"-"catch"?
125
try/catch versus throws Exception
160
Create an Android Jar library for distribution
0
Handling custom java exceptions with throwable cause in flex
205
How using try catch for exception handling is best practice
2
Besides Adding jar for JDBC,"java.lang.classnotfoundexception:com.mysql.jdbc.Driver "