How can you speed up Eclipse?

How can you make the experience with Eclipse faster?

For instance: I disable all the plugins I don't need (Mylyn, Subclipse, …).

Instead of using a plugin for Mercurial, I configure TortoiseHG as an external tool.

The three most influential factors for Eclipse speed are:

The "same" workspace in Indigo (3.7.2) SR2 loads in 4 seconds, in Kepler SR2 (4.3.2) in 7 seconds and in Luna (4.4.0) in 10 seconds. All are Java EE bundles. Newer versions have more bundled plugins, but still the trend is obvious. (by "same" workspace I mean: same (additionally installed) plugins used, same projects checked out from version control).

It will cut down your Eclipse startup time considerably (50% in my case if not more). This will tell the VM not to validate all the .class files it is loading.

Consider this: Never Disable Bytecode Verification in a Production System (as mentioned in the comments)

Go to Windows -> Preferences -> Validation and uncheck any validators you don't want or need.

For Eclipse 3.7, you use Windows -> Preferences -> General -> Startup and Shutdown.

Make sure that you're using the Sun JVM to run Eclipse.

On Linux, particularly Ubuntu, Eclipse is installed by default to use the open source GCJ, which has drastically poorer performance. Use update-alternatives --config java to switch to the Sun JVM to greatly improve UI snappiness in Eclipse.

Close any open projects which are not in current use.

Try to switch off the auto publish mode during development.

Thanks for the hints. These options (mentioned above) helped me a lot:

Increasing memory & regarding to my updated Java version in eclipse.ini:

Additionally, since we are optimizing for speed, setting -Xms to the same value as -Xmx makes the JVM start with the maximum amount of memory it is allowed to use.

You may also get additional performance by choosing a different garbage collection strategy depending on your JVM.

If you're fed up with restart cycles you could use JavaRebel from ZeroTurnaround. That will shorten your time spent on server/client restarts.

While not directly related to Eclipse:

Eclipse loads plug-ins lazily, and most common plug-ins, like Subclipse, don't do anything if you don't use them. They don't slow Eclipse down at all during run time, and it won't help you to disable them. In fact, Mylyn was shown to reduce Eclipse's memory footprint when used correctly.

I run Eclipse with tons of plug-ins without any performance penalty at all.

It's not only the memory that you need to increase with the -Xmx switch, it's also the perm gen size. I think that problem was solved in Eclipse 3.4.

There is another thing that really speeds up Eclipse on both Windows and especially Linux - putting the JVM in RAM disk.

For Windows you can use the commercial RAM disk driver from Qsoft.

For Linux use any of the methods described in numerous articles on the Internet. It is important to give additional space to the RAM disk that is 10% bigger than the size of the JVM.

Check it out. It really makes a difference.

I give it a ton of memory (add a -Xmx switch to the command that starts it) and try to avoid quitting and restarting it- I find the worst delays are on startup, so giving it lots of RAM lets me keep going longer before it crashes out.

Along with the latest software (latest Eclipse and Java) and more RAM, you may need to

I also tuned vmargs and stuff. But what really sped up Eclipse on Windows is the "proper" configuration of the anti-virus software. You have to disable the on-demand scanning of packed files. jar files, and many files related to java are packed with PKZIP algorithm to spare space. Because Eclipse uses tons of java files, an anti-virus attempts to individually unpack and scan every one of them. So for Windows platform: turn off the on-demand scanning of packed files, otherwise Eclipse will be unusably slow. Please keep in mind, that disabling this unfortunately makes your system weaker against attacks, most of the malware use packers.

I implemented a plug-in to configure which features to be loaded in runtime to improve the performance and reduce the conflict among different plug-ins.

You may have installed many features into your Eclipse, such as Android development tools, C/C++ development tools, PHP, SVN, Git and ClearCase plug-ins. Hence Eclipse is heavy and costs a lot of memory, and some of them are not often used.

So you could use my tool to create different runtime policies, such as one that has Android, Git and base Eclipse, another one contains C/C++, SVN and base Eclipse. Next time Eclipse would only load the specified features if you're using the policy that only has Android and Git.

You are welcome to try it and give me the feedback. :)

The name of that tool is Equinox Advanced Configurator.

Not to be underrated is having a fast machine. 16-32 GB of RAM, SSD and a decent processor... and who0o0om there you go.

One more trick is to disable automatic builds.

Best practices in this thread are implemented in the free Optimizer For Eclipse, from ZeroTurnaround.

What does it help with?

For more details, check out this article from RebelLabs.

Make an effort to configure your build path. Code completion uses a lot of memory if it has to go through your whole project folder.

I experienced a considerable improvement in performance when limiting the number of open tabs (in the past I frequently had 30+ tabs open). You can let Eclipse handle this for you automatically:

8 open tabs is the amount before the >> sign appears, so I tend to leave it at 8.

When opening more tabs, the ones the least recently accessed will be closed.

->When all editors are dirty or pinned

If it has unsaved modifications you can prompt to save & reuse (tab will be closed, a new one will be opened in its place). Or you can open a new editor end thus increase the amount of open tabs (the unobtrusive choice).

If you want to ensure some tabs never get closed autmatically, you can pin them. This by clicking on the pin icon (the rightmost icon in the toolbar, with "pin editor" as tooltiptext).

I've disabled all unused options in Windows > Preferences > General and it has a huge positive impact on performance, eclipse is still slow when switching tabs, I don't want to increase memory, but it's a lot faster when scrolling. Thx for the tips.

Eclipse will run faster when working with small projects. But when you have to work with large project, you will get irritated with its speed. Even with a huge RAM you will not be happy with its speed.Below steps will help eclipse to increase its speed

4.Confugure eclipse.ini which will be available in the eclipse installed location.

Have look at http://wiki.eclipse.org/Eclipse.ini for more option in configuring eclipse.ini

Try this too, it will improve the performance:

Cleaning the above folders will not impact the project files.

Well, if you are developing a GWT application using Eclipse, then this is the way:

Out of memory error in Eclipse

Also remember to add the same VM arguments to the hosted mode configuration.

If you use Maven and ivy do check out their consoles in case they are hogging processing during builds. I use ivy and on top of that I have certain JAR files (internal) changing with same version, so it has to workout all the time to fetch them.

If you have defined you project on a network drive then you will also experience lag during build/read/write type of processes.

In special cases, bad performance can be due to corrupt h2 or nwire databases. Read Five tips for speeding up Eclipse PDT and nWire for more information.

Where I work, we are dependent on a VM to run Debian. I have installed another Eclipse version on the VM for testing purpouses, but this sometimes creates conflicts if I have the other Eclipse version running. There is a shared folder which both of the Eclipse versions shares. I accidentally left the Debian Eclipse installation running in the background once and that gave me corrupt database files.

On Windows 8. Open Control panel. Find Windows Defender. Go to settings Exclude all folders where is your Spring/Eclipse and workspace

Apart from configuring eclipse.ini for memory usage. I have configured by "Start up & shutdown options". My Eclipse is blazing fast now. 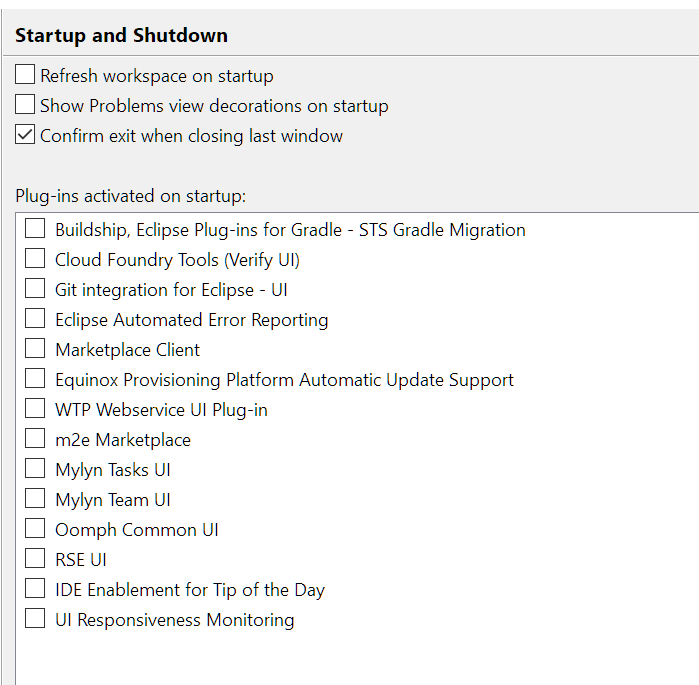 The only real way to hasten Eclipse with the standard plug-ins is to give it more memory and in some cases access to a faster storage space / defragmented hard drive.

Beyond that there is not much you can do performance-wise: most standard plug-ins do not have a continuous runtime cost, even Mylyn is relatively fast.

Upgrading to the latest JVM supported on your machine may help as well.

Some people downgrade to older Eclipse versions to get better performance. It may also make sense to use Eclipse classic instead of the official releases.

Try these. There are two ways.

Execute the command in the terminal.

to get better performance and fast response for Ubuntu.

Ramdisk is part of system memory. Ubuntu by default uses a half of physical memory (RAM) as ramdisk, and it is mounted onto

, it can be used just like normal disk space (create files and folders and manipulate them with better performance rather if they were stored on the hard disk). If ramdisk uses more than a half of RAM, data will be moved into the swap space. If ramdisk uses less, the remaining can still do what RAM’s doing.

As is said above, ramdisk by default can use a half of RAM. If you want to change the upper limit, follow the steps below:

To make it easy to use, you can mount a directory into

Not the answer you're looking for? Browse other questions tagged eclipse performance or ask your own question.

316
What are the best JVM settings for Eclipse?
91
Speedup IntelliJ-Idea
58
Eclipse memory settings when getting “Java Heap Space” and “Out of Memory”
40
Hints to improve Eclipse performance
42
Find out what JVM Eclipse is running on
28
How to remove old versions of Eclipse plugins?
22
Max value of Xmx and Xms in Eclipse?
26
Eclipse refreshing workspace takes forever
22
A new version of Eclipse just came out. Is there anything I can do to avoid having to manually hunt down my plugins again?
13
Why Eclipse is too slow on startup?
see more linked questions…

1226
How can you profile a Python script?
738
How can I show line numbers in Eclipse?
1230
'Must Override a Superclass Method' Errors after importing a project into Eclipse
2898
Improve INSERT-per-second performance of SQLite?
478
How to turn off the Eclipse code formatter for certain sections of Java code?
1875
“Debug certificate expired” error in Eclipse Android plugins
751
Why is my program slow when looping over exactly 8192 elements?
1387
Replacing a 32-bit loop counter with 64-bit introduces crazy performance deviations with _mm_popcnt_u64 on Intel CPUs