Differences between websockets and long polling for turn based game server

I am writing a server for an iOS game. The game is turn based and the only time the server needs to push information to the client is to notify of the opponent's move.

I am curious if anyone could comment on the performance and ease of implementation differences between using websockets and long polling. Also, if I used websockets, should I only use it to receive information and send POST requests for everything else or should all communication be through the websocket?

Additionally, is there anything to extra to consider between websockets and long polling if I am interested in also making a web client?

What is Long polling ?

A variation of the traditional polling technique and allows emulation of an information push from a server to a client. With long polling, the client requests information from the server in a similar way to a normal poll. 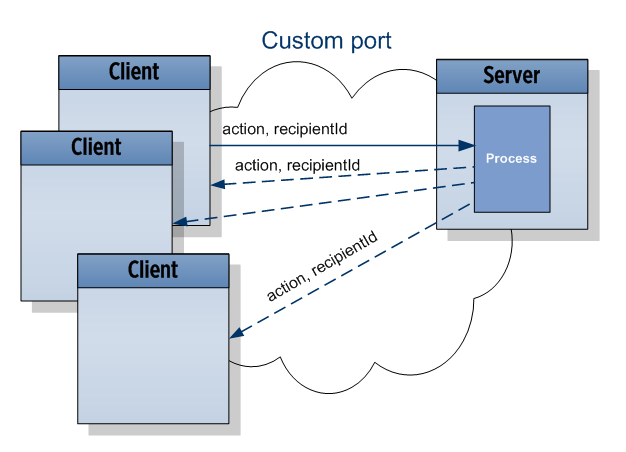 WebSockets provide a persistent connection between a client and server that both parties can use to start sending data at any time.

If there is a need of Real time communication you can very well opt for websockets .

But in Long Polling :

A connection is held open between the web client and the web server so that when the server has new information it can push it to the client. That request is then finished. A new request is then made between the client and the server and then wait for another update from the server. The same TCP connection is generally open persistently throughout multiple requests due to HTTP/1.1 keep-alives.

References and other considerations :

What are Long-Polling, Websockets, Server-Sent Events (SSE) and Comet?

Not the answer you're looking for? Browse other questions tagged ios web-services rest websocket long-polling or ask your own question.

164
Do HTML WebSockets maintain an open connection for each client? Does this scale?
312
In what situations would AJAX long/short polling be preferred over HTML5 WebSockets?
549
Differences between socket.io and websockets
1095
What are Long-Polling, Websockets, Server-Sent Events (SSE) and Comet?
133
My Understanding of HTTP Polling, Long Polling, HTTP Streaming and WebSockets
379
WebSockets protocol vs HTTP
0
Comparing websockets with long-polling
6
Long-polling vs websocket when expecting one-time response from server-side