How do JavaScript closures work at a low level?

I understand that a closure is defined as:

[A] stack-frame which is not deallocated when the function returns. (as if a 'stack-frame' were malloc'ed instead of being on the stack!)

But I do not understand how this answer fits in the context of JavaScript's storage mechanism. How does the interpreter keep track of these values? Is the browser's storage mechanism segmented in a way similar to the Heap and Stack?

An answer on this question: How do JavaScript closures work? Explains that:

[A] function reference also has a secret reference to the closure

What is the underlying mechanism behind this mysterious "secret reference?"

EDIT Many have said that this is implementation dependent, so for the sake of simplicity, please provide an explanation in the context of a particular implementation.

javascript browser closures
Share
Improve this question
edited May 23 '17 at 12:08

This is a section of slebetman's answer to the question javascript can't access private properties that answers your question very well.

Let's use a made-up language as an example. In this language, like in javascript, functions define scope. Lets take a look at an example code:

Now, let's see what happens when we call a:

a() gets called, create a new stack frame. Allocate space for local variables on the stack:

a() calls b(), create a new stack frame. Allocate space for local variables on the stack:

In most programming languages, and this includes javascript, a function only has access to its own stack frame. Thus a() cannot access local variables in b() and neither can any other function or code in global scope access variables in a(). The only exception are variables in global scope. From an implementation point of view this is achieved by allocating global variables in an area of memory that does not belong to the stack. This is generally called the heap. So to complete the picture the memory at this point looks like this:

(as a side note, you can also allocate variables on the heap inside functions using malloc() or new)

Now b() completes and returns, it's stack frame is removed from the stack:

and when a() completes the same happens to its stack frame. This is how local variables gets allocated and freed automatically - via pushing and popping objects off the stack.

A closure is a more advanced stack frame. But whereas normal stack frames gets deleted once a function returns, a language with closures will merely unlink the stack frame (or just the objects it contains) from the stack while keeping a reference to the stack frame for as long as it's required.

Now let's look at an example code of a language with closures:

Now let's see what happens if we do this:

First function a() is called which in turn calls b(). Stack frames are created and pushed onto the stack:

Also note that since we haven't actually called the function c(), the variable cc is not yet allocated anywhere in memory. It's currently only a scope, not yet a stack frame until we call c().

Now what happens when we call c()? A stack frame for c() is created as normal. But this time there is a difference:

But the rules of local and global variables still applies. All variables in b() become local variables to c() and nothing else. The function that called c() has no access to them.

What this means is that when you redefine c in the caller's scope like this:

As you can see, it's impossible to regain access to the stack frame from the call to b() since the scope that c belongs to doesn't have access to it.

I've written an article on this topic: How do JavaScript closures work under the hood: the illustrated explanation.

To understand the subject, we need to know how scope objects (or LexicalEnvironments) are allocated, used and deleted. This understanding is a key to having a big picture and to know how do closures work under the hood.

I'm not going to re-type the whole article here, but as a short example, consider this script:

When executing the top-level code, we have the following arrangement of scope objects: 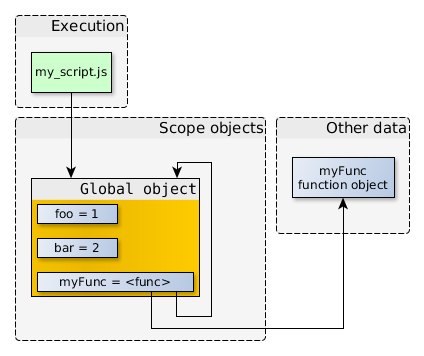 Notice that myFunc references both:

And when myFunc() is called, we have the following scope chain: 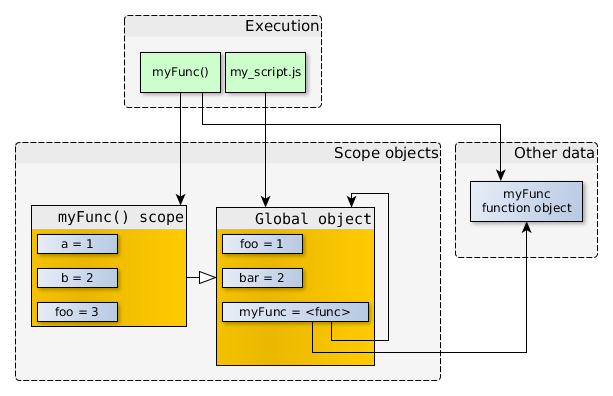 When function is called, new scope object is created and used to augment the scope chain referenced by the myFunc. It allows us to achieve very powerful effect when we define some inner function, and then call it outside of the outer function.

See the aforementioned article, it explains things in detail.

Let's break down how the three key transformations go. For the function declaration case, assume for concreteness that we have a function of two arguments x and y and one local variable z, and x and z can escape the stack frame and so need to be moved to the heap. Because of hoisting we may assume that z is declared at the beginning of the function.

That's the tricky part. The rest of the transformation just consists in using call to call the function and replacing accesses to the variables moved to the heap with lookups in envs.

A couple of caveats.

Finally, user3856986 posted an answer that makes some different assumptions than mine, so let's compare it.

The main difference is that I assumed that local variables would be kept on a traditional stack, while user3856986's answer only makes sense if the stack will be implemented as some kind of structure on the heap (but he or she is not very explicit about this requirement). A heap implementation like this can work, though it will put more load on the allocator and GC since you have to allocate and collect stack frames on the heap. With modern GC technology, this can be more efficient than you might think, but I believe that the commonly used VMs do use traditional stacks.

Also, something left vague in user3856986's answer is how the closure gets a reference to the relevant stack frame. In my code, this happens when the envs property is set on the closure while that stack frame is executing.

Finally, user3856986 writes, "All variables in b() become local variables to c() and nothing else. The function that called c() has no access to them." This is a little misleading. Given a reference to the closure c, the only thing that stops one from getting access to the closed variables from the call to b is the type system. One could certainly access these variables from assembly (otherwise, how could c access them?). On the other hand, as for the true local variables of c, it doesn't even make sense to ask if you can get access to them until some particular invocation of c has been specified (and if we consider some particular call, by the time control gets back to the caller, the information stored in them might already have been destroyed).

Not the answer you're looking for? Browse other questions tagged javascript browser closures or ask your own question.

7626
How do JavaScript closures work?
29
Where does a JavaScript closure live?
5
javascript can't access private properties
3
Is correct to think of all JS code & variables as being a property of an execution context?
2
How many closures are created in the following code?
1
What does the call stack look like in a system of nested functions, functions passed as arguments, and returned functions?
0
Closure in JavaScript?
-3
what's the meaning of the closures in javascript?