How do you scale the title bar on a DPI aware win application?

I am making my app dpi-aware per monitor by setting <dpiAware>True/PM</dpiAware> in the manifest file. I can verify with process explorer that this is indeed working or by calling GetProcessDpiAwareness.

This is all working fine and I can scale anything in the client area fine in my code. However, my only problem is that if I drag my app from a system-dpi monitor to a non-system dpi monitor, the title bar and any system menu would either become too big or too small. This isn't the case for most built-in apps (e.g. calc, edge browser, etc..) so there must be away to scale it properly. Does anyone how the devs at MS did this?

The screenshot below should explain my problem better. Also notice, that the padding between the close, min, and max button is different when it's scaled (96dpi).

Does anyone how the devs at MS did this?

This has a pretty disappointing answer. Using Alin Constantin's WinCheat and inspecting the top-level window of Calculator, I see a window size of 320x576, and a client size that is also 320x576.

In other words, Microsoft entirely avoids the problem by suppressing the non-client area of the window, putting everything in the client area instead. Making this work well for you may involve custom drawing of the title bar.

Something worth noting is that Calculator and e.g. Windows Explorer don't use the same colour for the title bars. Calculator doing custom drawing of the title bar would explain that perfectly.

The Windows 10 Anniversary Update (v1607) has added a new API you must call to enable DPI scaling of the non-client areas: EnableNonClientDpiScaling. This function should be called, when WM_NCCREATE is received. The message is sent to the window's procedure callback during window creation.

If the application's DPI-awareness context is DPI_AWARENESS_CONTEXT_PER_MONITOR_AWARE_V2, then calling EnableNonClientDpiScaling should be omitted, as it won't have any effect, although the function will still return successfully.

Non-client scaling for top-level windows is not enabled by default. You must call this API to enable it for each individual top-level window for which you wish to have the non-client area scale automatically. Once you do, there is no way to disable it. Enabling non-client scaling means that all the areas drawn by the system for the window will automatically scale in response to DPI changes on the window. That includes areas like the caption bar, the scrollbars, and the menu bar. You want to call EnableNonClientDpiScaling when you want the operating system to be responsible for rendering these areas automatically at the correct size based on the API of the monitor.

Note that the non-client area of a per monitor–DPI aware application is not scaled by Windows, and will appear proportionately smaller on a high DPI display.

The Microsoft apps that you link to deal with this by removing the non-client area and making the client area cover the entire window.

It is enough to add new <dpiAwarness> declaration to manifest to solve all this mess. Example is here.

More investigations on the subject.

System setup: two monitors, one is 96 dpi another one is 267 dpi (Microsoft Surface 4).

Here is rendering (wrong, IMO) with <dpiAware>true/pm</dpiAware> in manifest: 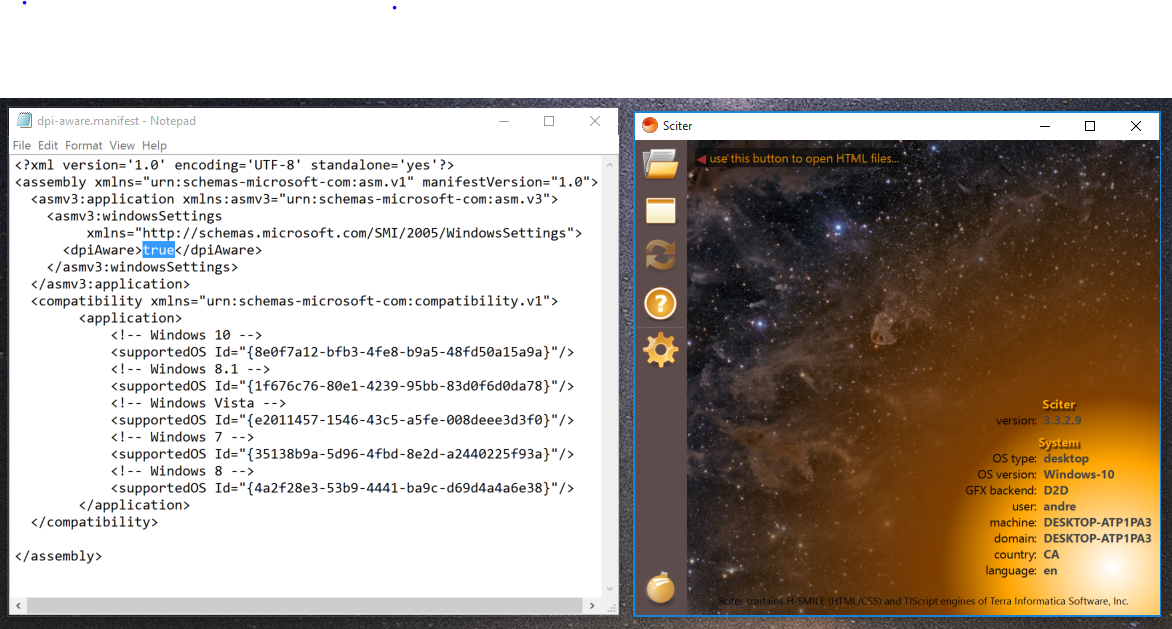 And I suspect that MSDN documentation is plainly misleading about values of PROCESS_DPI_AWARENESS. I do not see any differences in messages and styles between <dpiAware>true</dpiAware> and <dpiAware>true/pm</dpiAware>. The later one just makes caption larger. In both case application receives WM_DPICHANGED message while moving between monitors with different DPI.

Not the answer you're looking for? Browse other questions tagged c++ winapi windows-8.1 dpi windows-10 or ask your own question.

1
Per-Monitor DPI aware app runs as System DPI aware in VS2013
0
In Win81+ non-dpi aware process, figure out scale factor
6
How to create a scaling and size-changing Per-Monitor DPI-aware application that is backwards compatible with Windows 7?
9
Detect if non DPI-aware application has been scaled/virtualized
41
Scaling the non-client area (title bar, menu bar) for per-monitor high-DPI support
3
Is there a way to disable scaling for all the WPF application even if windows has some scale per monitor or system-wide scale?
1
How to get correct DPI on System.Drawing.Graphics in a Per-Monitor DPI aware app?