Tools to search for strings inside files without indexing [closed]

So, what's the best free, non-indexed text search tool out there? All it should do is return a list with files that contain the wanted string inside a folder and its subfolders.

search full-text-search text-files
Share
Improve this question
edited May 18, 2016 at 8:48

I'm a fan of the Find-In-Files dialog in Notepad++. Bonus: It's free. 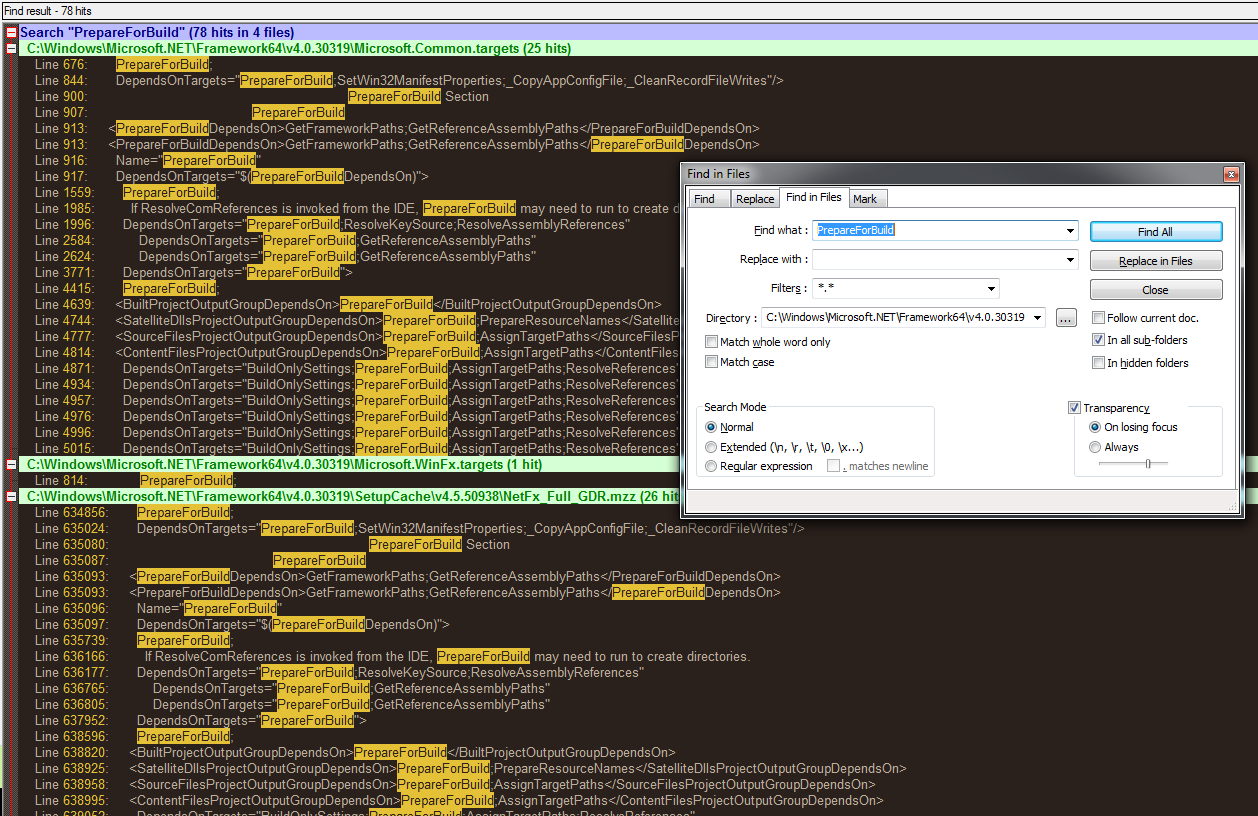 There is also a Windows built-in program called findstr.exe with which you can search within files.

Windows Grep does this really well.

Visual Studio Code has excellent search and replace capabilities across files. It is extremely fast, supports regex and live preview before replacement. 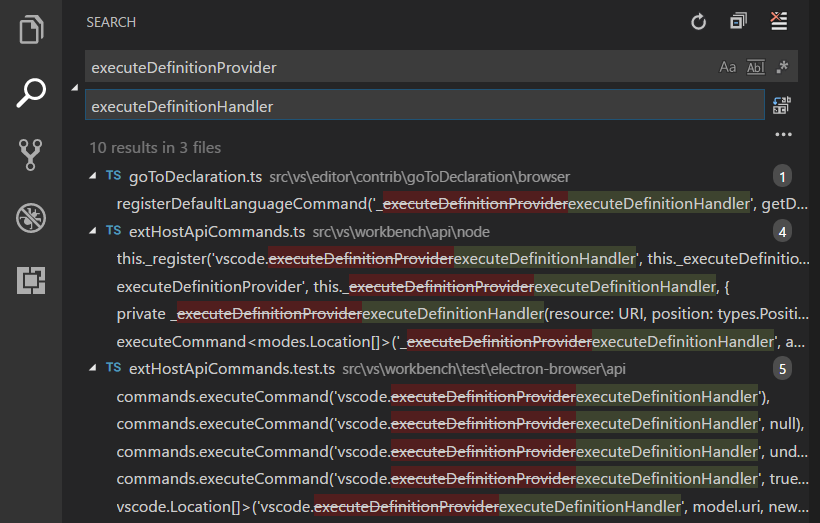 I like AstroGrep. The results are shown in a list. A click on a row shows you the whole line as a preview highlighting the hit. It seems to be quite fast, lean and it is free. Tested on Windows 7, 8, 10 and Windows Server 2008 R2. Allows regular expressions. 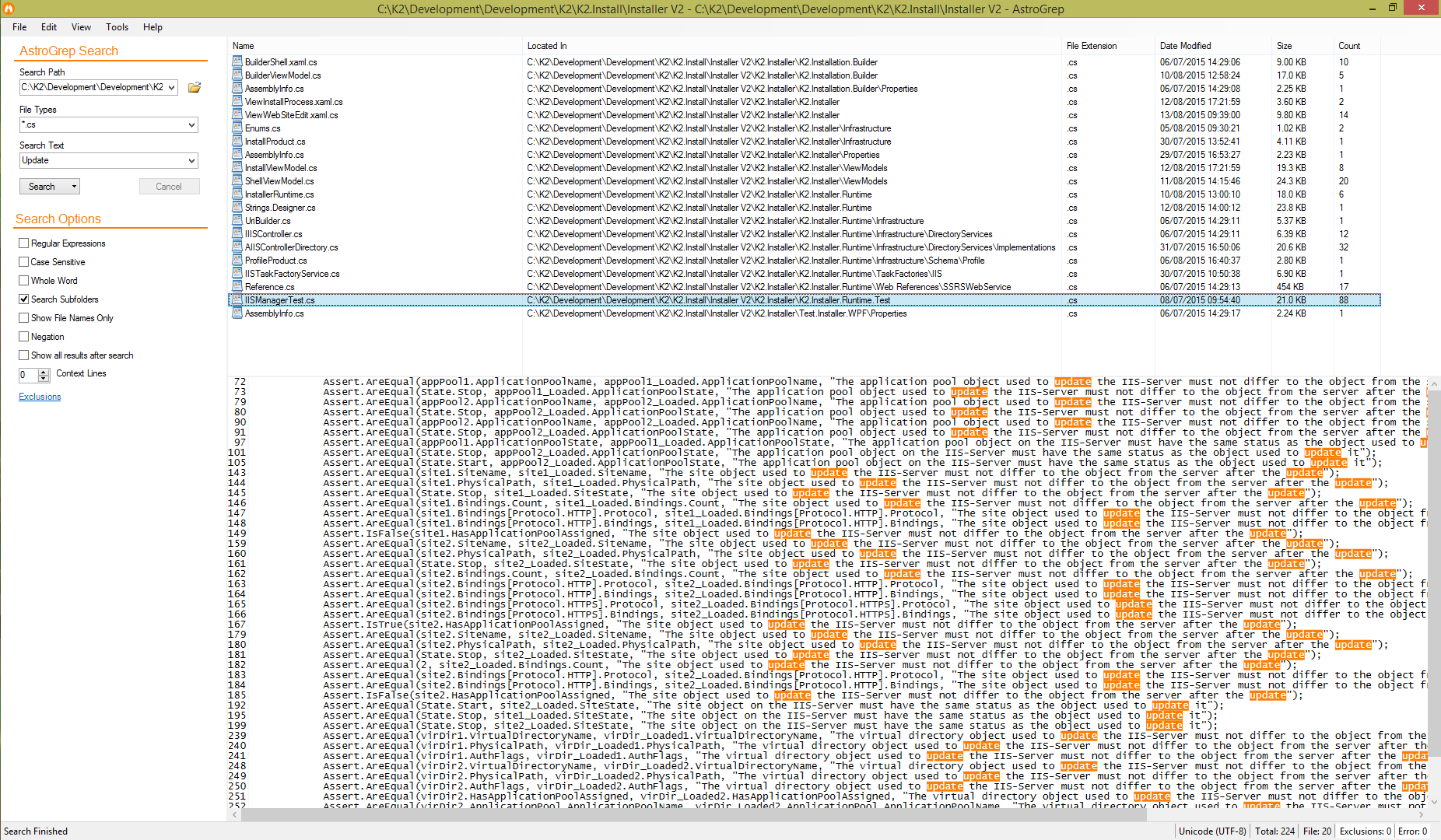 AstroGrep is a Microsoft Windows GUI File Searching (grep) utility. Its features include regular expressions, versatile printing options, stores most recent used paths and has a "context" feature which is very nice for looking at source code

Visual Studio's search in folders is by far the fastest I've found.

I believe it intelligently searches only text (non-binary) files, and subsequent searches in the same folder are extremely fast, unlike with the other tools (likely the text files fit in the windows disk cache).

VS2010 on a regular hard drive, no SSD, takes 1 minute to search a 20GB folder with 26k files, source code and binaries mixed up. 15k files are searched - the rest are likely skipped due to being binary files. Subsequent searches in the same folder are on the order of seconds (until stuff gets evicted form the cache).

The next closest I've found for the same folder was grepWin. Around 3 minutes. I excluded files larger than 2000KB (default). The "Include binary files" setting seems to do nothing in terms of speeding up the search, it looks like binary files are still touched (bug?), but they don't show up in the search results. Subsequent searches all take the same 3 minutes - can't take advantage of hard drive cache. If I restrict to files smaller than 200k, the initial search is 2.5min and subsequent searches are on the order of seconds, about as fast as VS - in the cache.

Agent Ransack and FileSeek are both very slow on that folder, around 20min, due to searching through everything, including giant multi-gigabyte binary files. They search at about 10-20MB per second according to Resource Monitor.

UPDATE: Agent Ransack can be set to search files of certain sizes, and using the <200KB cutoff it's 1:15min for a fresh search and 5s for subsequent searches. Faster than grepWin and as fast as VS overall. It's actually pretty nice if you want to keep several searches in tabs and you don't want to pollute the VS recently searched folders list, and you want to keep the ability to search binaries, which VS doesn't seem to wanna do. Agent Ransack also creates an explorer context menu entry, so it's easy to launch from a folder. Same as grepWin but nicer UI and faster.

My new search setup is Agent Ransack for contents and Everything for file names (awesome tool, instant results!).

If you don't want to install Non-Microsoft tools, please download STRINGS.EXE from Microsoft Sysinternals and make a procedure like this one:

Not the answer you're looking for? Browse other questions tagged search full-text-search text-files or ask your own question.

12
Tool to recursively search all files in a directory for a string
2
find function in MATLAB code
4
Search VBA code across multiple Excel files
1
Remove script from wordpress site
0
I need to find a string within the website files. Specifically looking for the footer HTML files

3
Strategies for search across disparate data sources
283
How to search for file names in Visual Studio?
359
Search code inside a Github project
4
What are some good cloud or 3rd party search providers out there?
274
How to search contents of multiple pdf files?
399
How to search a string in multiple files and return the names of files in Powershell?
363
How can I search for a commit message on GitHub?
0
Asymmetrical search for special characters in JavaScript