How do I use the C#6 "Using static" feature?

I'm having a look at a couple of the new features in C# 6, specifically, "using static".

using static is a new kind of using clause that lets you import static members of types directly into scope.
(Bottom of the blog post)

The idea is as follows, according to a couple of tutorials I found,
Instead of:

You can omit the repeated Console statement, using the new C# 6 feature of using static classes:

However, this doesn't appear to be working for me. I'm getting an error on the using statement, saying:

"A 'using namespace' directive can only be applied to namespaces; 'Console' is a type not a namespace. Consider a 'using static' directive instead"

What gives? Is the msdn blog's example incorrect? Why doesn't this work?

The blog post has now been updated to reflect the latest updates, but here's a screenshot in case the blog goes down: 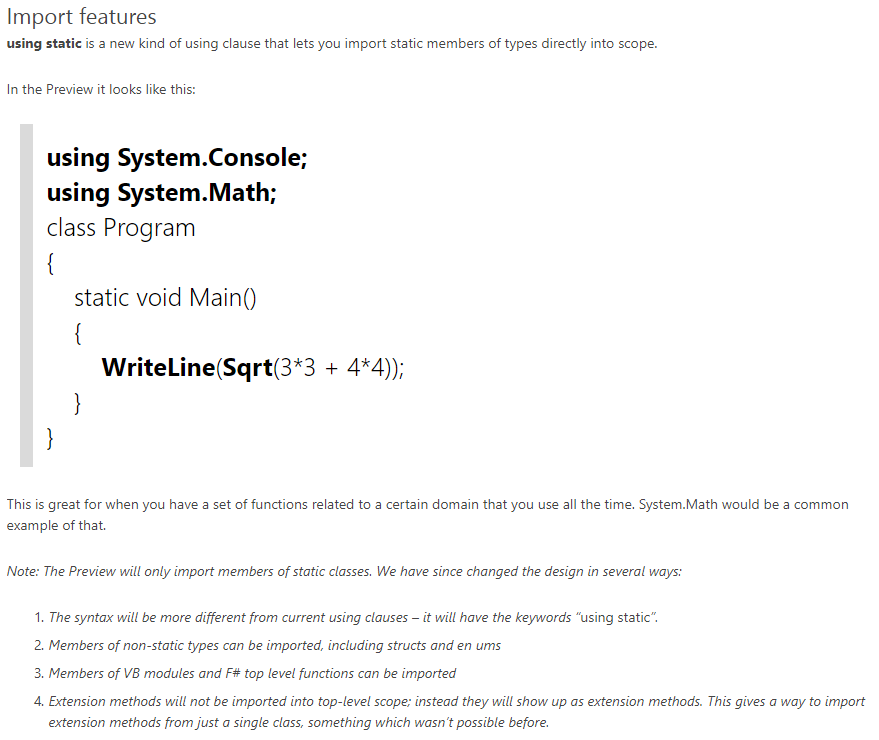 It appears the syntax has slightly changed since those blog posts were written. As the error message suggests, add static to your include statement:

Then, your code will compile.

Note that, in C# 6.0, this will only work for members declared as static.

When using static System.Math, you can just use Abs();.
However, you'd still have to prefix PI because it isn't a static member: Math.PI;.

Starting with C# version 7.2, this shouldn't be the case, const values like PI can be used as well.

The static Keyword on a using statement will import only the one, specified type (and it's nested types). Furthermore you must not give the type name anymore. So just add static to your using.

Note: Please use this feature only when the two classes are logically closely related, otherwise it makes reading the code pretty hard.

Not the answer you're looking for? Browse other questions tagged c# visual-studio-2015 static using c#-6.0 or ask your own question.

0
Method not found without being fully qualified, using statement does not work
8
Can a static class be imported in C# as in VB.NET?
6
Can I do "using namespace.class"?
9
C# 6.0 without Visual Studio
3
Not scoping static vars properly in C#
3
C# programming error - Expression denotes a `type', where a `variable', `value' or `method group' was expected
1
The name 'functionname' does not exist in the current context
1
How to combine extension method's this with params keyword?
0
C# consoleApp Cannot call static method in separate class
0
Making enum public
See more linked questions

7271
What is the difference between String and string in C#?
3710
How do I cast int to enum in C#?
2390
Static class variables and methods in Python
4225
How to enumerate an enum
2324
Should 'using' directives be inside or outside the namespace?
3095
How to iterate over a dictionary?
1971
Difference between static class and singleton pattern?
1825
Proper use of the IDisposable interface
1327
What does "static" mean in C?
1528
'Static readonly' vs. 'const'