It works when I click go to definition on the code that exists but it doesn't work if I click one in the metadata such as String, List.
Pressing ALT+F12, a blank page appears.
Pressing F12 shows:

one or more errors occurred 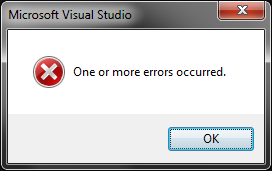 This is a bug being tracked at Microsoft's bug tracker as well as on the Roslyn issue tracker. It is caused by Microsoft only testing C# with space-based indentation.

The so-called "Workaround" is miserable, but still, it is to change your settings from using tabs to spaces.

There are a plethora of other issues (Namely with the C# Auto Formatter that cause tab-based work to be terrible in VS2015 until a patch comes out.

There is now an extension available on VS Gallery, GoToDefinition Fix, which will serve well as a temporary fix for this issue.

Visual Studio 2015 Update 1 CTP and RC variants both fix this issue, but the RC is the latest and should be installed instead of CTP if you are running it. Many formatting issues are addressed by these updates, and tabs are, basically, usable again.

Not the answer you're looking for? Browse other questions tagged visual-studio-2015 or ask your own question.