I'm trying to set up Docker Machine with Docker Compose.

Scenario 2 (with Docker Machine)
Then I create a VM using Docker Machine and tell Docker to talk to that machine with eval $(docker-machine env streambacker-dev).

At this point, if I ssh to my docker machine and run df -h, I get:

If I then run docker-compose up -d, I get a "no space left on device" error while downloading the last container.

"tmpfs" seems to be indeed a bit full after that:

Checking the --virtualbox-disk-size option shows that it defaults to 20000 MB, which I think is what we can see as "/dev/sda1" on both pictures. So why are containers filling up "tmpfs" n and what exactly is "tmpfs"? Is is a temporary download directory? How can I create more space for my containers?

I had the same error ([ERROR] InnoDB: Error number 28 means 'No space left on device') and solve it this way:

Like said above, the tmpfs has nothing to do with --virtualbox-disk-size. It seems like boot2docker mounts tmpfs into memory, so you need to dedicate more memory to your virtualbox vm. You can do it by specifying the --virtualbox-memory parameter.

If you are using Docker Community Edition:

If you are using boot2docker (docker-machine) clear the volumes that are orphaned:

using the docker rm or docker rmi commands you can remove the images that you don't need. Actually exist an image that helps in this task (martin/docker-cleanup-volumes). The basis is to start selectig from your images and containers list:

B. MODIFY THE DOCKER JSON DESCRIPTOR

it's mentioned in some forums. The idea is to increment the descriptor located in ~/.docker/machine/machines/default/config.json . The param seems to be DiskSize but i don't know if it works in other OSs (not in windows).

in Windows OS, docker machine or boot2docker is in fact a virtualbox vm, then you can follow the procedure to resize the disk. Take care to backup the files. The general procedure is to make a resize in virtualbox and then use an utilitary called gpartd to modify the space perceived by linux in its partitions. There are some links to do this procedure referenced below:

The idea is recreate the default docker-machine. The following commands can illustrate you. Note that as you are re-creating the boot2docker, you will lost the previous downloaded docker images.

On docker osx / I was able to press a button [Move Disk Image] and it successfully moved the Docker.qcow2 (presumably containing containers / images) 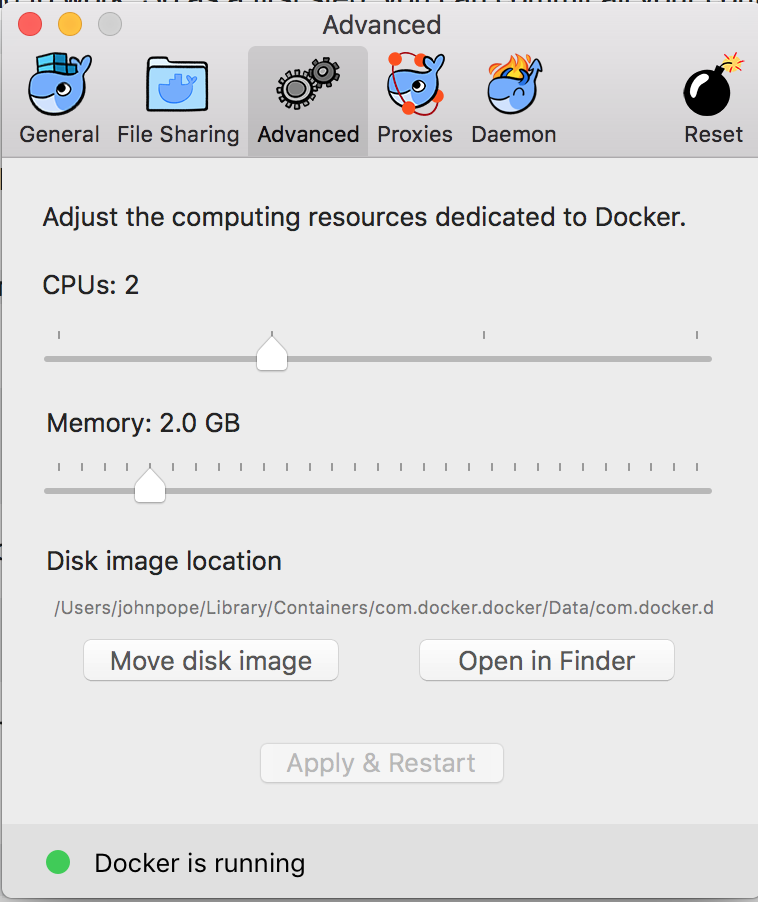 initially - when machines started - I was still getting a No space left on device error but it resolved shortly after.

I ran into this problem and could not add additional space with the docker UI for mac, I installed docker with homebrew and ran the following command when creating my machine:

to remove all hidden and unused containers.

docker system prune does not remove all unused containers.

Open file /lib/systemd/system/docker.service with your favorite text editor and replace the following line where /new/path/docker is a location of your new chosen docker directory:

check that docker service is stopped, the following command should yield no result

Not the answer you're looking for? Browse other questions tagged docker docker-compose docker-machine or ask your own question.