I have an image that is only 28KB in size: 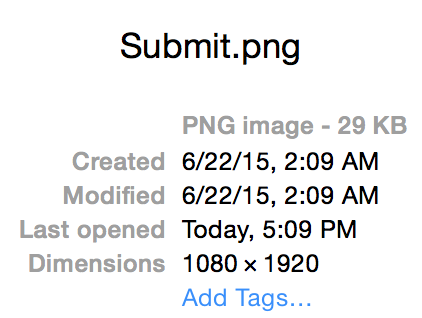 I'm adding it to my view using this code:

Now I'm profiling with Instruments Allocation and "Marking Generation" right before and right after the image is allocated:

Instruments indicates that it took 7.92MB to load the image into memory. I'm seeing the same issue with other images as well. Why is ImageIO_PNG_Data at 7.92MB when the image is only 28KB in size?

@matt and @dan really did a good job of explaining why an uncompressed image should take up literally 300X memory of the actual PNG image size to display on the screen. What makes this issue worse is that the iOS caches these images and does NOT release them from cache EVER, even on memory warnings.

So here's a way to prevent image caching on iOS to save up a ton of memory, just use imageWithContentsOfFile instead of imageNamed:

and now the ImageIO_PNG_Data's will be released when the view controller is dismissed.

It's all right here: https://developer.apple.com/library/ios/documentation/UIKit/Reference/UIImage_Class/#//apple_ref/occ/clm/UIImage/imageNamed:

If you have an image file that will only be displayed once and wish to ensure that it does not get added to the system’s cache, you should instead create your image using imageWithContentsOfFile:. This will keep your single-use image out of the system image cache, potentially improving the memory use characteristics of your app.

It's because a PNG is compressed data describing what the image looks like, so a PNG that is nothing but a solid color is tiny because it is easy to describe. But the bitmap is the bitmap - just a grid of pixels - and depends purely on the dimensions of the image (which, in your case, is immense).

Not the answer you're looking for? Browse other questions tagged ios xcode memory-management instruments xcode-instruments or ask your own question.