VS2015 build fails with no error message with Dynamic

I was writing a unit test on a piece of code that returned JSON. The type that it returns is an anonymous type, so I thought to verify the values on it I'd just cast the object to a dynamic to do my assertions.

However, when I do that, my build fails but I don't have any error messages. I was able to reproduce this with very simple code in a new Unit Test Project:

See below for a screenshot of the build failing

The build succeeds when I comment out the assertion though: 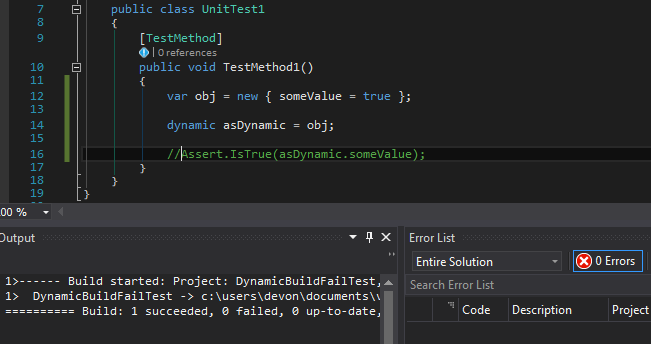 In contrast, I ran the following code in LinqPad 5 beta (which uses the Roslyn compiler) and had no issues:

What's going on here? Since the error isn't showing I can't tell if I'm using dynamic incorrectly, or if it can't find the overload to use for IsTrue() because of the dynamic, or if this is a bug in the compiler (though I highly doubt this, I don't have any evidence that there's something wrong with my code).

Regarding the overload issue, I tried Assert.IsTrue((bool)asDynamic.someValue); but the build still fails, still no error message.

Per @RonBeyer's comment, I had also tried more casting such as below to no avail:

Upon closer inspection, I found that there was an error listed in the Output window:

Okay, VS2013 is better at reporting the errors, I will search based on those:

Okay, adding a reference to Microsoft.CSharp fixed the build error, but I will leave this question open because it's presumably an issue with VS2015 that (in my mind) should be resolved.

Add a reference to Microsoft.CSharp in order to use dynamic like this.

As two people have noted in comments, for Net Core and NetStandard, this problem is sometimes fixed by adding a NuGet reference to Microsoft.CSharp.

Had this issue using dynamic keyword in combination with Newtonsoft.json in a .net 3.0 project.

The fix was to drop dynamic altogether and use JObject instead:

There is a known issue with build errors not appearing in the error list. See, for example, https://github.com/dotnet/roslyn/issues/4567 .

To work around it, in the "Error List" window, select the pulldown menu to the right of "Messages" and select "Build + IntelliSense".

I had a similar issue and the only thing that solved it to me was to upgrade my NUnit package to the latest version.

By the way when you open the Nuget window make sure that your not downgrading your package (when I had version 2.0.11 it showed me to upgrade to version 2.0.9 which is actually downgrading...)

Not the answer you're looking for? Browse other questions tagged c# visual-studio-2015 roslyn or ask your own question.

68
Dynamic in the immediate window causes 'Microsoft.CSharp.RuntimeBinder.Binder' is not defined or imported error

195
Visual Studio build fails: unable to copy exe-file from obj\debug to bin\debug
22
Dynamic + linq compilation error
490
Could not load file or assembly ... An attempt was made to load a program with an incorrect format (System.BadImageFormatException)
98
Using System.Dynamic in Roslyn
3
Visual Studio 2015 C++ Unit Test
71
Can not delete \bin\roslyn\VBCSCompiler.exe - Access is denied
2
Roslyn c# CSharpCompilation - Compiling Dynamic