Operator used tempdb to spill… with variables but not literals

The thing I don't understand is: this query is slow and I get a warning about spilling to tempdb. But if I change it and simply replace @start and @end with the same dates directly, it's much faster and there's no warning about tempdb spillage.

My guess is that the tempdb spill is because of cardinality estimates.

It appears that when I'm using variables, the statistics are way off. It's estimating about 1.45 million rows instead of 6 million.

When I use literals, the estimates are almost exactly correct.

How can I get correct estimates, and avoid tempdb spill, when using variables?

The tempdb spill was because of estimates, which weren't right because I was using local variables.

Some stuff on why they were wrong because of the local variables:

SQL Server cardinality estimation can use two types of statistics to guess how many rows will get through a predicate filter:

If you're not familiar with statistics objects and their density vectors / histograms, read this.

In general, you'll get better estimations using literals because the statistics in the histogram are tailored to the value of the literal, rather than being averaged over the whole column.

I'm running the following query on the AdventureWorks2012_Data database:

We've got a literal, so the CE will look for the value 0 in the UnitPriceDiscount histogram to figure out how many rows will be returned.

I've run debugging output to see which statistics object is being used and queried that object to see its contents, and here's the histogram:

Now let's look at the execution plan for the query:

The 'Filter' step is getting rid of all rows that don't match the predicate, so the 'Estimated Number of Rows' section of its properties has the result of the cardinality estimation: 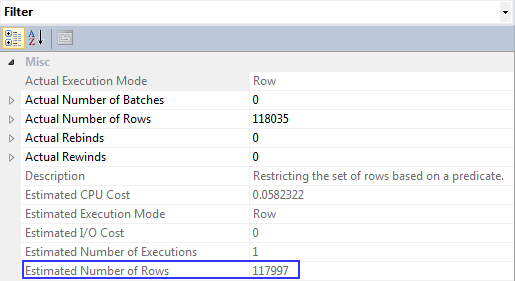 That's the value we saw in the histogram, rounded.

Now we'll try with a parameter:

The cardinality estimator doesn't have a literal to search for in the histogram, so it has to use the overall density of the column from the density vector:

So if you multiply that by the number of rows in the table, you get the average number of rows per value in this column. There are 121317 rows in Sales.SalesOrderDetail, so the calculation is:

The properties of the filter: 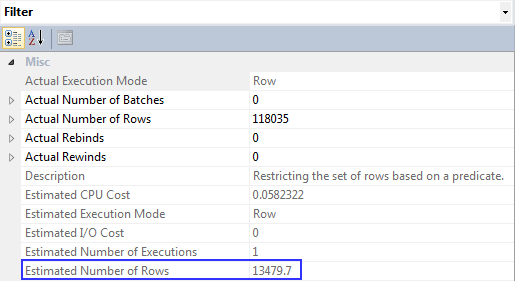 So the new estimation is coming from the density vector, not the histogram.

Let me know if you have a look at the stats object and it doesn't add up as above.

The tempdb spill was because of estimates, which weren't right because I was using local variables.

If I changed the local variables to parameterized SQL with sp_executesql, the estimates became correct, and the tempdb spill went away.

However, even with the tempdb spill addressed, parameterized SQL is still slower than using literals, and I created a new question for that separate issue.

Not the answer you're looking for? Browse other questions tagged sql sql-server or ask your own question.

274
SQL Server: Query fast, but slow from procedure
6
Why do I get “The log file for database 'tempdb' is full”
2
different estimated rows on same index operation?
2
SQL Server 2014 performance - parameterized SQL vs. literals
2
How to get rid of warning “Operator used tempdb to spill data”
3
Performance Issues due to wrong Cardinality Estimate in SQL Server Nested Loops operator
0
Verify SQL Server statistics