How can I speed up my regex?

I'm writing a script to change all the urls of my content over to a new place.

But this operation is terribly slow, taking about 4.5 seconds to process an average-sized array.

Why is this so slow? How can I make this faster?

If this question would be better suited to the codereview stack exchange, or some other site, let me know and I'll move it there.

The data, as it appeared in the db I was pulling from appeared to be 140 characters. During the pull process, some virtualization happened and appended 400 more characters onto the string, so no wonder the regex takes so long.

The 140-character-string loop takes considerably less time, as others have pointed out.

The moral of the story: "Make sure the data you have is what you expect it to be" and "If your regex is taking too long, use smaller strings and a more specific regex (i.e. no wildcard)"

Perhaps it would run a little faster like this:

Generally, the more exclusive your character sets are the faster the regular expression will run.

For such a simple replacement, a regex is likely not the fastest search and replace. For example, if you replace the search with .indexOf() and then use .slice() to do the replacement, you can speed it up 12-50x (depending upon browser).

I wasn't sure of the exact replacement logic you want to simulate, but here's a non-regex method that is a lot faster: 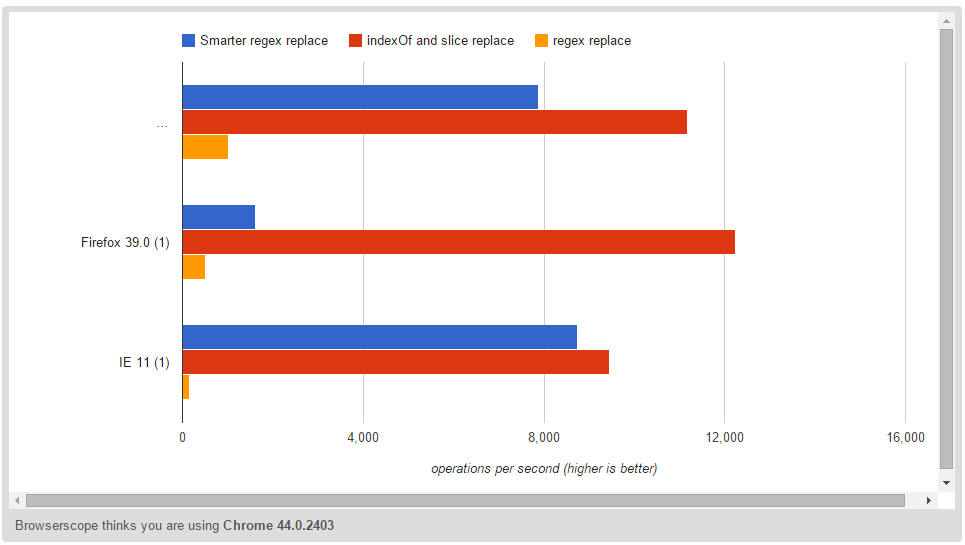