How to install SIP & PyQT on windows 7

I'm a newbie to Python environment & really struggling to install SIP & PyQt on my Win 7 machine.

This is what I've done so far,

Could any one help me, what am I missing here?

Note: There are several questions posted before, but none of them helped so far, I'm sure I must be missing something silly.

Thanks for your time.

ALL these instructions are for 32-bits, it will work even if you have a 64-bit system.

Since Qt 5.9, there is only one version of Qt downloadable for Windows that includes the pre-built components for MSVC201x and MinGW.

The instructions follow the same steps as for Qt 5.8

When Installing Qt, make sure to select the correct pre-built components you have (for e.g Microsoft Visual Studio 2017) 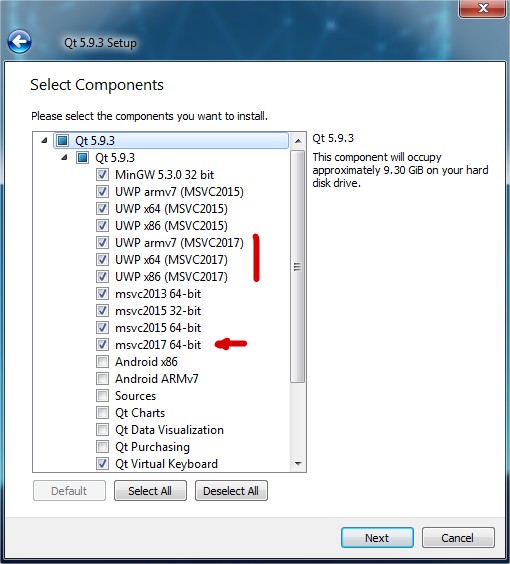 (if you also have python 2.7, make sure to use verions 3 of python)

Open a terminal and stay on it.

It is important you stay on the same terminal (cmd.exe) during the whole process so you don't have to source your environment twice.

You should have now :

Make sure you are using Python 3.x:

At this step, you did not install sip, you only configured it (basically its installation dir, etc...)

VERY IMPORTANT STEP: source your environment variables by running in the terminal :

Keep the double quotes, windows does not like spaces ...

After running this command, it automatically change your current directory, stay on the terminal and re-go to your sip-4.19.2 directory and run:

In windows, "make" is substituted by "nmake" !

Then (always in the same terminal) you run : 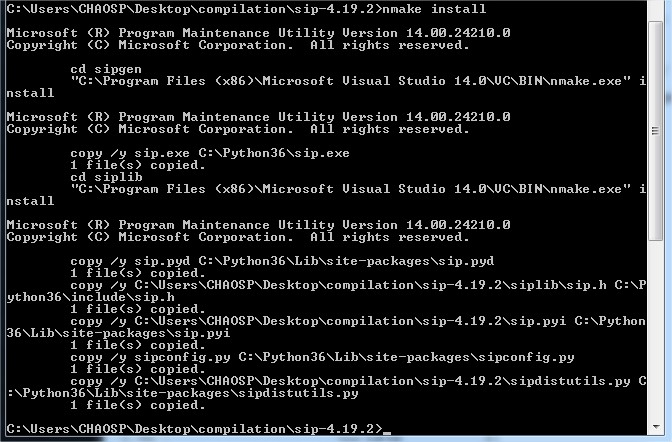 This will create a sip.exe in your Python dir, for me it is C:\Python36, it may elsewhere, depending on where you installed Python.

The steps are almost the same as sip but it will take more time.

Note that this command disable QtNfs because of a compilation problem I could not resolve.. and automatically accepts the license.

Then, run (the compilation will take a while) :

There's a ONE SHOT solution to all your installation problems on Windows. Go to this website. http://www.lfd.uci.edu/~gohlke/pythonlibs/. Navigate to the library you want and download the .whl file for your python version and your computer (32 or 64 bit.) Then run pip install YourWhlFileName.whl, and you're done! (CAUTION: MAKE SURE NOT TO CHANGE THE NAME OF THE WHL FILE OR IT WON'T WORK.)

This is for all that want to build PyQt4 with latest Qt4 and Python 3.4.x.

Open a command prompt (use this one for all the process) and execute these commands:

In the output take note of QMAKESPEC value, in my case win32-msvc2010, then use it later on --spec option for PyQt4 configure-ng script.

If the current directory has been changed, execute again:

Now, if you use 64-bit version of Python execute:

otherwise, if you use 32-bit version of Python execute:

NOTE: in some cases, in order to avoid this error

it is necessary to copy .dll files from

Not the answer you're looking for? Browse other questions tagged python python-sip or ask your own question.

5897
How do I merge two dictionaries in a single expression (taking union of dictionaries)?
3231
How do I check if a list is empty?
6348
How do I check whether a file exists without exceptions?
5458
How to execute a program or call a system command?
4916
How can I safely create a nested directory in Python?
3417
How do I sort a dictionary by value?
4265
How to make a flat list out of a list of lists
3466
How do I list all files of a directory?
2645
How can I install pip on Windows?
1672
How do I install pip on macOS or OS X?