error MSB4057: The target "v8" does not exist in the project

The compilation fails for all v8* targets (v8-build.bat):

If I open the solution file in Visual Studio, it looks like this: 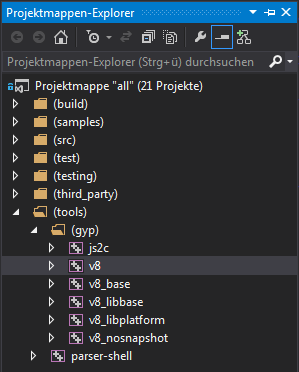 I can build v8, v8_libbase and v8_libplatform just fine in VS.

Then search in the generated All.sln.metaproj file the exact target names (<Target Name="">) of all projects you want to build. v8 can have a name like _tools_\_gyp_\v8. After that you can build projects

The correct way to specify a target/project if it's in a solution folder is:

But in case of (tools) and (gyp) it's simply not possible, because msbuild can't handle parentheses in the target parameter /t.

So either remove ( ) and specify the path like tools\gyp\v8, or get rid of the solution folders entirely. If the solution is flat, /t:v8 will work.

Unfortunately, both the wrapping of folder names with brackets as well as the generation of non-flat .sln are hardcoded in gyp, which generated my all.sln. There is no switch to control whether solution folders are created or not. It will create them if the target version of Visual Studio is known to support this kind of nesting.

@dothebart and this post helped me a lot to figure it out, thank you!

Not the answer you're looking for? Browse other questions tagged visual-studio-2013 compiler-errors v8 arangodb msbuild-target or ask your own question.

811
The located assembly's manifest definition does not match the assembly reference
18
Visual Studio 2013 RTM Setup Failed - The form specified for the subject is not one supported or known by the specified trust provider
1
Assemblies appear to be smaller when build with MSBuild than with Visual Studio
0
The target "GetSolutionConfigurationContents" does not exist in the project
2
Unable to execute vcvarsall.bat
2
Error MSB4025: The project file could not be loaded. Could not find file (project file name).metaproj
1
Powershell x64 does not start in Windows 8.1
0
File permissions changed in build process, compilation aborts because access denied (Windows, Cygwin)