I'm a software developer with a Windows 10 PC. I have to support some older software written in Visual Studio 2010 using Windows SDK 7.1

In trying to set up the development environment, I have successfully installed VS2010, and come to install Windows SDK 7.1, however the installer gives the error:

Some components cannot be installed

However, Windows 10 comes with .NET 4.5, so as far as I can tell there is yet another version check problem.

This would not worry me so much, but in attempting to install the Visual Studio 2010 compiler update, this fails, saying

cannot install because windows sdk 7.1 is not found

Attempting to install .NET 4 fails because it detects a later version of .NET.

I stumbled across another workaround, which I've also posted on a msdn thread:

I just ran into this same problem. No idea how safe this actually is to do, but I was able to work around it by temporarily fooling the installer into thinking I had a different version of .NET 4.0 installed. I opened Process Monitor and used it to monitor everything that setup.exe was doing in order to find out how it was determining that I had a "pre-release" version of .NET 4.0.

It turns out that it looks at these two strings in the registry:

On my Windows 10 machine, these currently are both 4.6.00079. The installer doesn't seem to like this value. I temporarily replaced both of them with the string 4.0.30319 in regedit to match the value from InstallPath, and that seemed to do the trick. And of course, when I was finished, I put them back the way they originally were.

However, I did not have permission to change those values, so it was a bit tricky. I right-clicked on the Client key, chose Permissions, and clicked Advanced. Then I changed the owner to my user account instead of TrustedInstaller. This allowed me to add permissions for Full Control for myself so I could modify the Version value. I repeated the same process on the Full key. After the installer completed successfully, I put the original version values back in (4.6.00079), deleted the permissions I added for myself, and restored the owner to TrustedInstaller (to do that, type NT SERVICE\TrustedInstaller as the username).

First install SubInAcl,can be downloaded from Microsoft here. You may need to add it to your PATH, ex: set PATH=%PATH%;C:\Program Files (x86)\Windows Resource Kits\Tools

Then run these commands in an elevated cmd prompt:

Great answer by Dougg3 above. Just so it helps others, I went through the process and took some screen shots in case it helps anybody. I do have 64 bit Windows 10.

This is the reg edit file path that Dougg referenced. 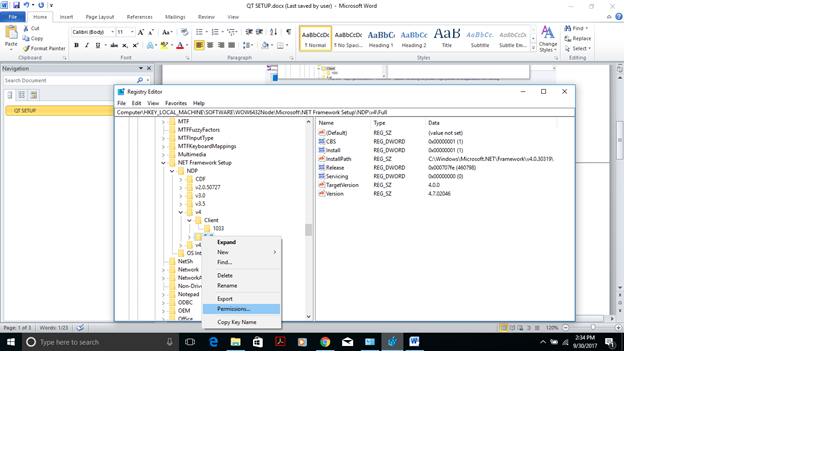 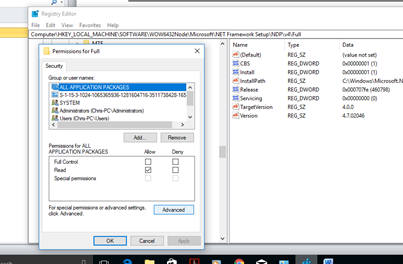 Where it says Owner on the top click the Change link 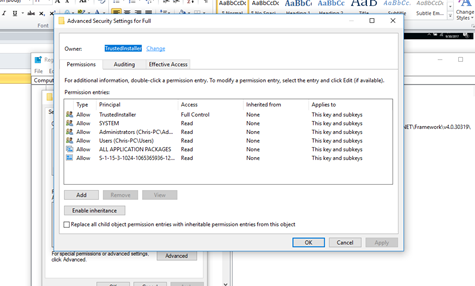 The next image has two steps - first click on Advanced from "Select User or Group" then click on Find Now button on next dialogue which has the same title. 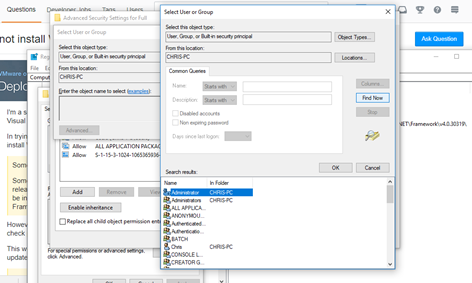 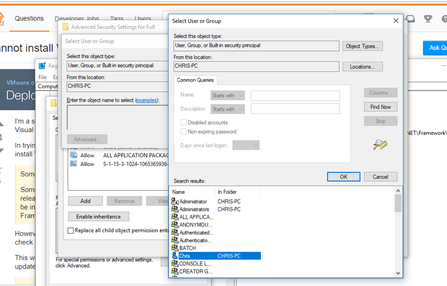 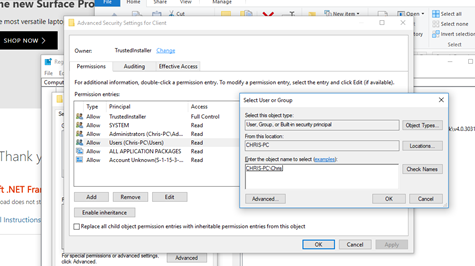 Go to your user you just selected on previous dialogues then select Allow Full Control, then click OK 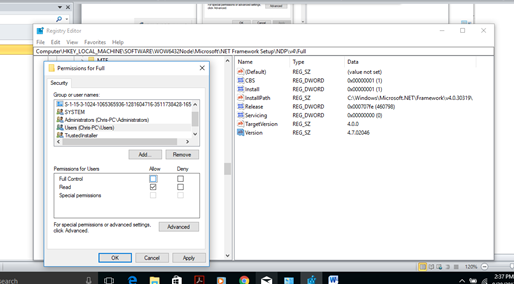 Now you're able to edit the version. 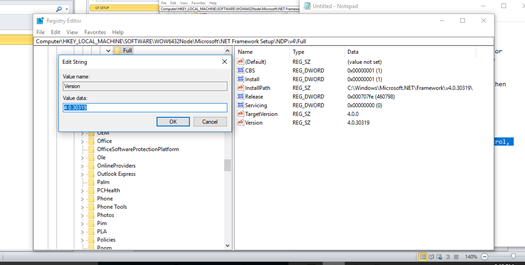 After you're finished with this revert the version number to what it was before and undo giving yourself the Full Control for that registry.

Install SDK 7.1 on your computer, it will mostly fail on compiler extras, but you need this first.

download the exe. change the extension from 'exe' to 'zip'. extract the file now. run SDKSetup.exe from within the /Setup directory

I just needed to compile some one else's code quickly and this was the fix for me on Windows 10.

If your here trying to install psycopg2 make sure your pip is up-to-date or you'll get these errors.

Not the answer you're looking for? Browse other questions tagged .net visual-studio-2010 windows-10 or ask your own question.