Consider prova.mat in MATLAB obtained in the following way

If I run the parfor loop with 4 local workers in my Macbook Pro it takes 1.2 sec. Replacing parfor with for it takes 0.01 sec.

With my actual data, the difference of time is 31 sec versus 7 sec [the creation of the matrix C is also more complicated].

If have understood correctly the problem is that the computer has to send baseAto each local worker and this takes time and memory.

Could you suggest a solution that is able to make parfor more convenient than for? I thought that saving all cells in baseA was a way to save time by loading once at the beginning, but maybe I'm wrong.

A lot of functions have implicit multi-threading built-in, making a parfor loop not more efficient, when using these functions, than a serial for loop, since all cores are already being used. parfor will actually be a detriment in this case, since it has the allocation overhead, whilst being as parallel as the function you are trying to use.

When not using one of the implicitly multithreaded functions parfor is basically recommended in two cases: lots of iterations in your loop (i.e., like 1e10), or if each iteration takes a very long time (e.g., eig(magic(1e4))). In the second case you might want to consider using spmd (slower than parfor in my experience). The reason parfor is slower than a for loop for short ranges or fast iterations is the overhead needed to manage all workers correctly, as opposed to just doing the calculation.

Check this question for information on splitting data between separate workers.

Consider the following example to see the behaviour of for as opposed to that of parfor. First open the parallel pool if you've not already done so:

Then execute a couple of large loops:

Then do the same with parfor instead of for. You will notice that the average time per iteration goes up (0.27s to 0.39s for my case). Do realise however that the parfor used all available workers, thus the total time (sum(Time)) has to be divided by the number of cores in your computer. So for my case the total time went down from around 270s to 49s, since I have an octacore processor.

So, whilst the time to do each separate iteration goes up using parfor with respect to using for, the total time goes down considerably. 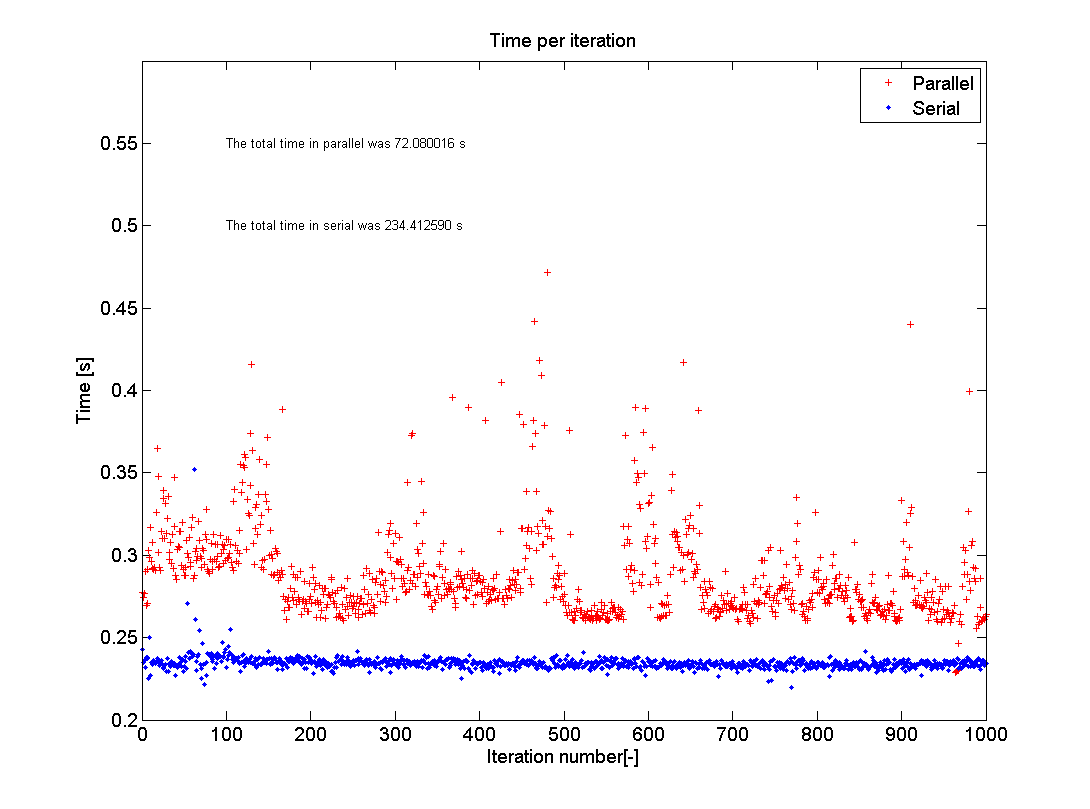 This picture shows the results of the test as I just ran it on my home PC. I used n=1000 and eig(500); my computer has an I5-750 2.66GHz processor with four cores and runs MATLAB R2012a. As you can see the average of the parallel test hovers around 0.29s with a lot of spread, whilst the serial code is quite steady around 0.24s. The total time, however, went down from 234s to 72s, which is a speed up of 3.25 times. The reason that this is not exactly 4 is the memory overhead, as expressed in the extra time each iteration takes. The memory overhead is due to MATLAB having to check what each core is doing and making sure that each loop iteration is performed only once and that the data is put into the correct storage location.

The following approach works for data which is looped by group. It does not matter what the grouping variable is, as long as it is determined before the loop. The speed advantage is huge.

A simplified example of such data is the following, with the first column containing a grouping variable:

Now, suppose for simplicity that I am interested in the sum() by group of the values in the second column. I can loop by group, index the elements of interest and sum them up. I will perform this task with a for loop, a plain parfor and a parfor with sliced data, and will compare the timings.

Keep in mind that this is a toy example and I am not interested in alternative solutions like bsxfun(), this is not the point of the analysis.

Borrowing the same type of plot from Adriaan, I first confirm the same findings about plain parfor vs for. Second, both methods are completely outperformed by the parfor on sliced data which takes a bit more than 2 seconds to complete on a dataset with 10 million rows (the slicing operation is included in the timing). The plain parfor takes 24s to complete and the for almost twice that amount of time (I am on Win7 64, R2016a and i5-3570 with 4 cores). 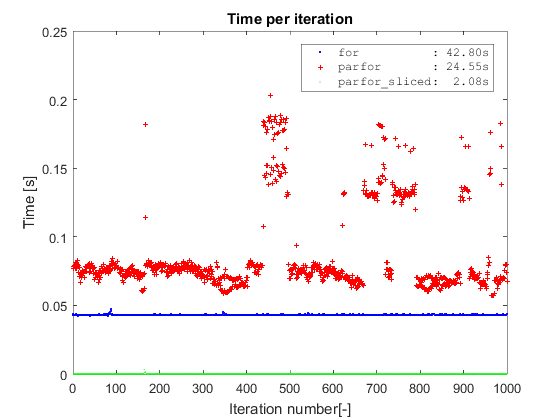 The main point of slicing the data before starting the parfor is to avoid:

You can find cache2cell() on my github repo.

Simple for on sliced data

You might wonder what happens if we run the simple for on the sliced data? For this simple toy example, if we take away the indexing operation by slicing the data, we remove the only bottleneck of the code, and the for will actually be slighlty faster than the parfor. 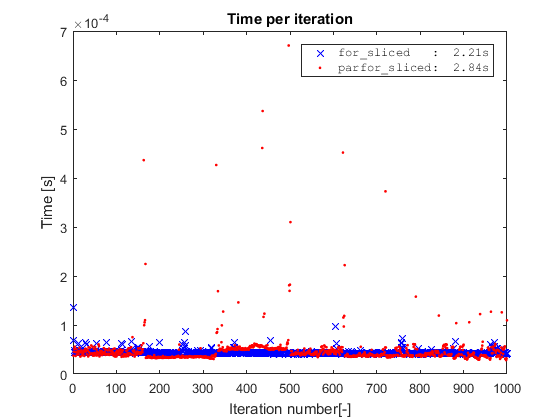 However, this is a toy example where the cost of the inner loop is completely taken by the indexing operation. Hence, for the parfor to be worthwhile, the inner loop should be more complex and/or spread out.

Now, assuming that your inner loop is more complex and the simple for loop is slower, let's look at how much memory we save by avoiding broadcasted data in a parfor with 4 workers and a dataset with 50 million rows (for about 760 MB in RAM). 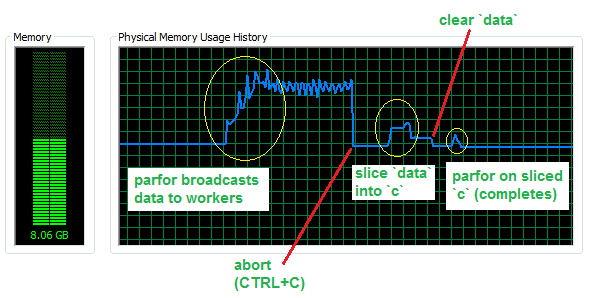 As you can see, almost 3 GB of additional memory are sent to the workers. The slice operation needs some memory to be completed, but still much less than the broadcasting operation and can in principle overwrite the initial dataset, hence bearing negligible RAM cost once completed. Finally, the parfor on the sliced data will only use a small fraction of memory, i.e. that amount that corresponds to slices being used.

Sliced into a cell

The raw data is sliced by group and each section is stored into a cell. Since a cell array is an array of references we basically partitioned the contiguous data in memory into independent blocks.

Not the answer you're looking for? Browse other questions tagged matlab optimization parallel-processing parfor or ask your own question.

0
Matlab: Error using parallel_function: Out of Memory
1
Matlab parallel processing with big data
0
Not enough RAM for parfor
9
Sending data to workers
16
why does a*b*a take longer than (a'*(a*b)')' when using gpuArray in Matlab scripts?
5
Matlab repeated matrix multiplication - loop vs built-in performances
1
Parallellising the factorisation of triangle numbers
1
How to average independent consecutive blocks of an array as fast as possible?
1
Why is parfor slow despite slicing?
2
parfeval slower than parfor
See more linked questions