How to solve ERR_CONNECTION_REFUSED when trying to connect to localhost running IISExpress - Error 502 (Cannot debug from Visual Studio)?

This is running on Windows Server 2008 and used to work several months ago. I am just now using this server again for some dev work with VS.

This is live web server used to serve up a few test sites as well.

This came up when running Visual Studio, then launching my projects for debugging.

Trying to launch any site through localhost:xxxx when IISExpress has been launched (using actual port #'s in the config to access different sites):

I have been at this for a few days already, as I have read others have had similar issues, tried most things I have read including changing the managedruntimeversion from "v4.0" to "v4.0.30319" for .net 4.5 (I have never had to do this before) and disabling the logging module (all suggestions found here).

There are only two entries in my hosts file that point to internal server IP addresses. No localhost related IP's or references.

I have gone as far as re-installing IIS Express, and Visual Studio 2013. I also created a brand new WebApplication site to try to resolve this (simple and no other complicated bindings).

When I spin up Fiddler, I see the following on the page:

I have removed all proxy settings from IE's LAN connection section, where before I was getting a red-x popup in VS indicating something like IISExpress could not launch.

This is not a matter of SSL vs non SSL.

I had TFS Server installed - uninstalled that in case there were some odd bindings that were interfering.

I wish there was a tag for really-stuck.

Please suggest away, as I don't want to go as far as spinning up a new server.

Try changing the port number in your project?

Don't forget to click Create Virtual Directory, or reply "Yes" to the prompt for creating virtual directory after you change your port number! (Thanks Connor)

Note: I'm a little reluctant to post this as an answer, as I have no idea what the issue is or what caused it, but I had a similar issue, and changing the port number did the trick for me. I'm only posting this per the suggestion in the comments that this worked for someone else as well.

In my case, it seemed like something was conflicting with the specific port number I was using, so I changed to a different one, and my site popped right back up! I'm not sure what that means for the old port number, or if I'll ever be able to use it again. Maybe someone more knowledgeable than myself can chime in on this.

This issue may be because in the recent past you have used IP address binding in your application configuration.

Steps to Solve the issue:

If you see some thing like below then this solution may not help you.

IP addresses present in the IP listen to list:

If you see something different than 0.0.0.0 then try below steps to fix this.

And now your issexpress is set to listen to any ping coming to localhost binding.

Thanks for all the answers. I tried all of them but none of them worked for me. What did work was to delete the applicationhost.config from the .vs folder (found in the folder of your project/solution) and create a new virtual directory (Project Properties > Web > Create Virtual Directory). Hope this will help somebody else.

I've just fixed this for my machine. Maybe it will work for some. Maybe not for others, but here is what worked for me.

In IIS, I had to add bindings for https to the default website (or, I suppose, the website you are running the app under).

Now my localhost works when debugging from Visual Studio.

I had the same problem. I tried these steps:

Sam's solution worked for me, but I didn't want to run as admin as a permanent solution.

This is how I solved it in my case:

Then I could run my app without the need for admin rights. But it did mess with the ability to browse to my app from an external computer. Close enough for me for now.

In my case it was caused by starting IIS with no administrative rights. When I launched IIS as admin and started the site it worked fine

In my case, it was caused by an infinite loop/stack overflow.

In my case, my co-worker changed the solution name so that after I get latest version of the project, I run my web application with IIS EXPRESS, then I got the message ERR_CONNECTION_REFUSED in my google chrome.

After I try all the solution that I find on the internet, finally I solved the problem with these steps :

I solved this problem by starting Visual Studio with Run as administrator. This is also required if you want to publish your project to the local IIS.

To set this permanently:-

I've solved by going to Project Properties -> Debug, after enable SSL and use the address in your browser

Rebuild All worked for me. VS2013, IIS Express.

Make sure you have a start page specified, as well. Right click on the .aspx page you want to use as your start page and choose "Set as start page"

A simple work around(it worked for me) is use the IP address instead of localhost. This should be fine for your development tasks.

Had to do the "advanced" version because standard didn't work. I suspect it was "Content Settings" that was doing it.

I recently encounter this issue when I copy the source code from another machine.

While probably not related to your problem, I had the same issue today. As it turns out, I had enabled an URL Rewrite module to force my site to use HTTPS instead of HTTP and on my production environment, this worked just fine. But on my development system, where it runs as an application within my default site, it failed...
As it turns out, my default site had no binding for HTTPS so the rewrite module would send me from HTTP to HTTPS, yet nothing was listening to the HTTPS port...
There's a chance that you have this issue for a similar reason. This error seems to occur if there's no proper binding for the site you're trying to access...

This may be relevant to a certain subset of people with this issue...perhaps in a different flavor.

I was forcing an https redirect on RELEASE.

And there wasn't https enabled on my iis express. Working correctly on DEBUG

I was simply trying to Bind IP with IIS but ended up messing with IIS config files I literally tried 20+ solutions for this, which includes

Else you can refer to this answer as well

I was getting this intermittently despite having tried several of the above suggestions. As soon as I disabled this, my debugging my site worked like a dream. (Think I'd only turned it on by accident, or perhaps in a previous life).

If you are using "real" IIS, this can occur if the W3SVC (World Wide Web Publishing) service is stopped.

Should seem obvious but if you accidentally stopped the service or have it set to manual this could happen to you.

I know the title says IIS express however google doesn't seem to filter out the express even when using a -Express hint so hopefully this helps someone else who found this page instead of an IIS-specific one.

I initially tried everything here in this post so far EXCEPT for repairing IIS 10 Express and none of it worked for me. I didn't repair IIS 10 Express because when you install it via visual studio it wants to repair via Visual Studio and not via the programs and features.

I found if I go and repair visual studio, it wants to reset everything (e.g. your extensions and customizations) which seems like overkill.

If you try to uncheck IIS 10 Express from Visual Studio Features it threatens to remove all of the components related to it (e.g. ASP.NET). This also seemed like overkill.

Note: I think I just took the defaults for the ASP.NET and web development workload so unchecking and rechecking might clear some components that are not there by default.

It didn't remove anything or reset the settings from what I can tell but I can now access my web api via localhost as expected.

For me, the ERR_CONNECTION_REFUSED error was raised because an application port was in use. If you want a more specific exception - run a website without debugging (Ctrl+F5), after that IIS Express show me such exception: 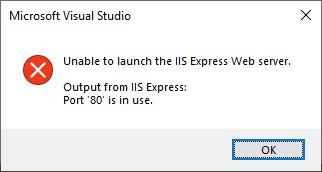 This usually happens after installing such software which reserve some ports. For example Docker or Hyper-V. My algorithm, for changing ports (virtual directory):