Ask Question
Asked 10 years, 6 months ago
Active 2 years, 1 month ago
Viewed 95k times
84
votes
Closed. This question is opinion-based. It is not currently accepting answers.
Closed 2 years ago.
Locked. This question and its answers are locked because the question is off-topic but has historical significance. It is not currently accepting new answers or interactions.

both the singleTask and singelInstance launch mode seems to do what I want so Im not sure which one I should be using for this purpose and why?

From the Application Fundamentals page of the Android dev guide:

By default, all the activities in an application have an affinity for each other — that is, there's a preference for them all to belong to the same task.

A "singleInstance" activity stands alone as the only activity in its task. If it starts another activity, that activity will be launched into a different task regardless of its launch mode — as if FLAG_ACTIVITY_NEW_TASK was in the intent. In all other respects, the "singleInstance" mode is identical to "singleTask".

As noted above, there's never more than one instance of a "singleTask" or "singleInstance" activity, so that instance is expected to handle all new intents. A "singleInstance" activity is always at the top of the stack (since it is the only activity in the task), so it is always in position to handle the intent. However, a "singleTask" activity may or may not have other activities above it in the stack. If it does, it is not in position to handle the intent, and the intent is dropped. (Even though the intent is dropped, its arrival would have caused the task to come to the foreground, where it would remain.) 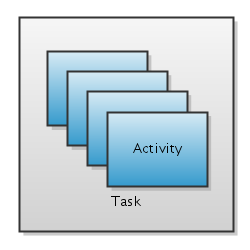 An important difference is that "singleTask" doesn't require the creation of a new task for the new Activities being launched when something is selected. Nor will it have to remove that new task on the back button each time.

Since your Activity stack does all pertain to one user "task", and it doesn't sound like you have an intricate Intent structure where singleInstance may be beneficial to always handle them, I would suggest using the singleTask launch mode.

Here is a good blog post for more info, as well as credited for the image: Android Activities and Tasks series – An introduction to Android’s UI component model

In a simple way-

Note: Although the activity starts in a new task, the Back button still returns the user to the previous activity.

Same as "singleTask", except that the system doesn't launch any other activities into the task holding the instance. The activity is always the single and only member of its task; any activities started by this one open in a separate task.

singleTask and singleInstance activities can only begin a task. They are always at the root of the activity stack. Moreover, the device can hold only one instance of the activity at a time — only one such task.
for more android:launchMode.

Not the answer you're looking for? Browse other questions tagged android android-activity launch multitasking or ask your own question.

0
Avoiding multiple instances of an activity
37
Is there any way to have one and only one instance of each activity?
40
Difference between singleTask and singleInstance
32
About android launchmode “singleTask”
11
How to enable only one instance of my application
7
Single Instance of Activity
2
Android Home activity launching a sub-activity
2
singleTask or singleInstance in games - Android
6
Deal with not working animations when activity is SingleInstance
2
How to get past Android manifest without a public constructor?
See more linked questions

1409
Activity restart on rotation Android
1324
Strange out of memory issue while loading an image to a Bitmap object
1121
Fling gesture detection on grid layout
3966
How do you close/hide the Android soft keyboard using Java?
2961
How to stop EditText from gaining focus at Activity startup in Android
1396
How do I pass data between Activities in Android application?
2850
Is there a unique Android device ID?
486
Android webview launches browser when calling loadurl
3716
Proper use cases for Android UserManager.isUserAGoat()?