This happens to me pretty often. For example, right now I have the debugger stopped at a breakpoint in a method . . . and it isn't displaying any variable values at all. Other times, it displays some, but not others.

Another less common possibility is that you've hosed the stack.

I had this issue (using Swift), I spent ages crawling through my git commits to find where to problem started.

For me, I was using Facebook Tweaks library, but I was (unnecessarily) importing it from my project-bridging-header.h file.

Once I got rid of it, I got my debugging back.

for example, in my bridging header I had:

I removed all the imports and just imported it as usual in my AppDelegate import Tweaks.

This fixed all my debugging issues, everything works as expected and I can also using Facebook Tweaks.

Note: I don't think this is an issue with Facebook Tweaks itself, you may have some other library causing the same issue. The idea is to remove things from your bridging-header one by one and see if you can narrow down the issue.

I think I read somewhere that if a library is causing many issues behind the scenes, this can stop your debugger working.

If this doesn't help, try crawling through your git commits and see at what stage the debugging stopped.

other similar issues on SO:

If you're having similar issues hope this helps! 👍

A possible solution is to set the Optimization Level for your current target Debug scheme to none.

I've had similar issues using LLDB. Switching it back to GDB seems to address it. Obviously this isn't solving the problem, but its a workaround anyway

My issue was that I had address sanitizer enabled. Disabling sanitizer resolved my issue in XCode 8.2.1

You can get the value of any variable in the console by writing:

If your breakpoint has "automatically continue after evaluating options" set, then it won't write to the variable view - FYI

I know this is old, but i ran into same problem too. I could not see any summaries of any objects, just types and some address code. After 4 hours of struggling with compilers, debuggers and other solutions i was about to give up when by accident i found this option in debugger. "Show Summaries". Just by clicking it everything got fixed and now i see all variable summaries! 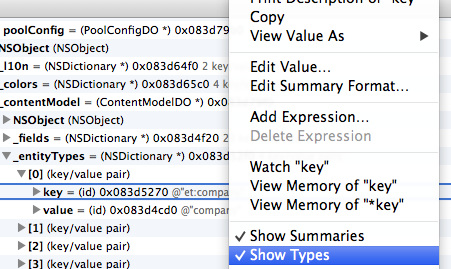 Had the same issue using Xcode 6.4 running the app on device. Running on simulator will show all variables on debugging variables panel.

There is a situation I have seen where Xcode can't cope with return value optimisation (RVO) -- if the compiler decides to apply RVO to a variable then it may not appear in the variables list. You can disable this in g++ and clang with the compiler flag -fno-elide-constructors

See also Understanding eliding rules with regard to c++11

For Swift mix OC Project which use pod

Fixing it by removing useless header(that import with framework by pod) xx-Bridging-Header.h

eg. In the past I import header with #import "GCDAsyncSocket.h" which I was added in podfile

just remove it in that xx-Bridging-Header.h file

If you are using the @property feature of Objective-C 2.0 the debugger does not display those variables unless they are backed by explicit ivars in your Class interface. This is slated to be fixed in Xcode 4 as I understand it.

temporary solution when it happpen to me : right click on the property jump to definition (u can do it manually and scroll to the @synthesize in the top of the file)

set the mouse cursor on the "_myObjects". that what worked for me..when i have problems.

I figured out why it is not working in XCode 4.6 - all of the variables in my object, self, were declared in the .m file instead of the .h. When I moved one of them back to the .h file, it showed up in the debugger. Sounds like a bug with XCode in that it cannot "see" variables declared in the implementation file.

For me it works changing the content of display variables panel to Local Variables and then back to Auto.

I have been stuck a while with this problem and finally find out a solution. I think that many reason can causes this bug but in my case here is the solution. While you are in the breakpoint position check the included classes. I was including using double quote a file which was located using include path.

So if you have this problem try to double check your inclusion and import. I know it seems weird but worked for me and I have been able to reproduce it by putting back the Double-Quote include.

One possible reason for the debugger displaying seemingly wrong values is that the variable type is of Any?.

In the example above, b holds the correct value of 1 even though it is not displayed as such.

I've had the same issue and I fixed it by reinstalling all Pods. Just delete them and install again.

9
Xcode debugger stopped displaying local and self variables
9
Xcode Debugging not showing values
4
Understanding eliding rules with regard to c++11
7
How to show objective-c description in xcode
3
How do I switch from lldb to gdb debugger types?
2
Xcode debugger doesn't display variable information after installing CocoaPods Podfile
0
Retrieve UUID from core data and set UUID variable not working

2
XCode debugger hangs on breakpoints
33
iPhone -- is it possible to inspect the frame of a UIView in the Xcode debugger?
210
Eclipse debugger always blocks on ThreadPoolExecutor without any obvious exception, why?
476
What does status=canceled for a resource mean in Chrome Developer Tools?
1251
Reference - What does this error mean in PHP?
752
PHP parse/syntax errors; and how to solve them
225
What makes the Visual Studio debugger stop evaluating a ToString override?
2
Xcode debugger doesn't display variable information after installing CocoaPods Podfile
0
How to prevent XCode debugger from stopping on object code?