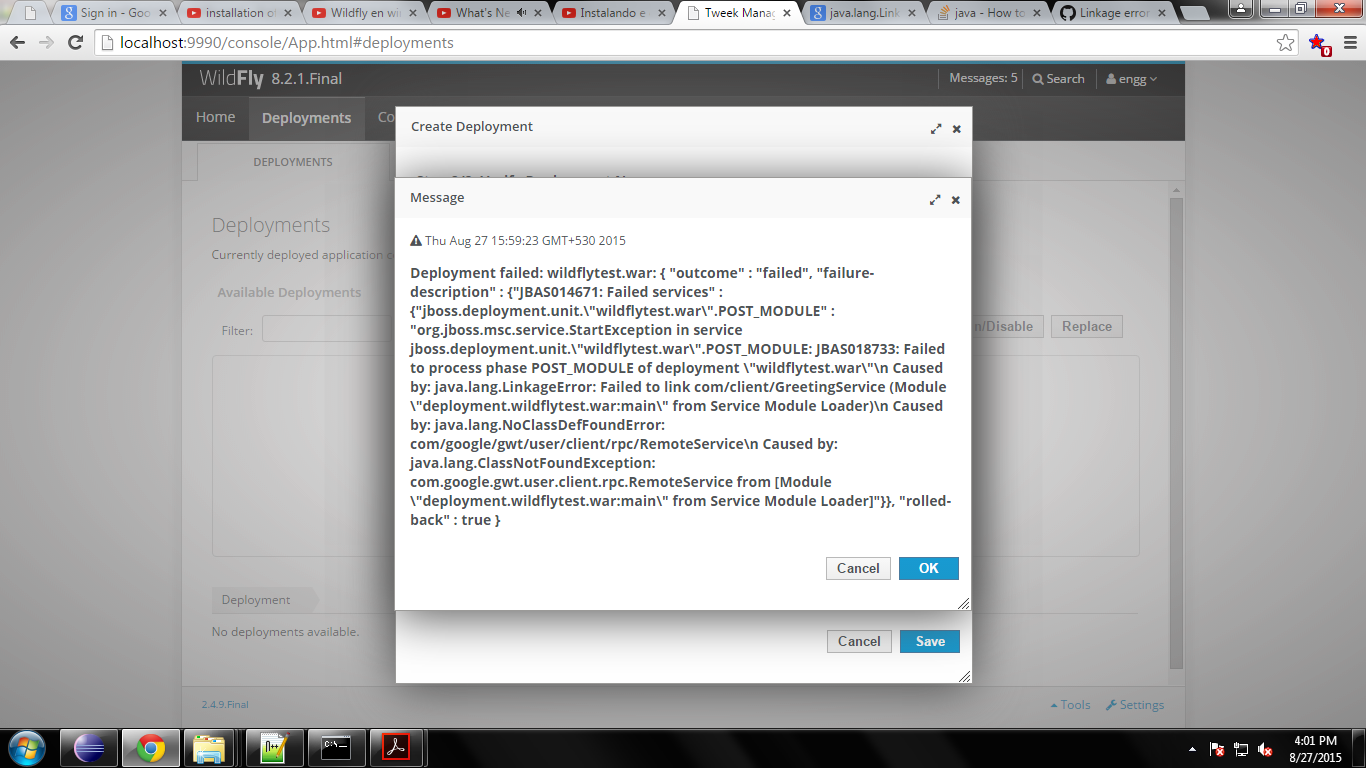 I am newbie for Wildfly till now I was working on tomcat to deploy my applications. Now just for add on features of Wildfly we want to move on to this. I am using Windows Os, I have done with the basic implementation of wildfly to start service etc. but Unable to deploy the ROOT.war in place of Welcome page. I have studied and gone through lot of links, I added jboss-web.xml in my project WEB-INF folder with following settings as I got in links. But I am still unable to deploy the ROOT.war in standalone deployment. Each times it goes to failed. Not getting what I have done Wrong.

I have made the admin user, But for deploying I am using wildfly user setting only. For it also I uncommented the fields from bin/init.d wildfly.conf fly. But totally unaware of the error.

Note: We also tried it on linux machine but ROOT.war is not getting deployed there too.used

To override the welcome webapp with Wildfly, you need to create a jboss-web.xml in the WEB-INF of your webapp with this content:

But if you try to access to the root directory (e.g. http://localhost:8080/) you will still have the default welcome content. To remove it, you just need to rename the directory welcome-content in the Wildfly directory.

This is a solution for those using Maven in their projects. To make Wildfly host your application under /, you have to name the war file containing the application as "ROOT.war". To automate this action, change the default war file name in your pom.xml to ROOT like this:

This way, when deploying the application to Wildfly using Maven, the file is automatically hosted in the root.

For my wildfly 9.0.1 deployment, we did the following two and it worked.

The welcome page has a note at the bottom,

To replace this page set "enable-welcome-root" to false in your server configuration and deploy your own war with / as its context path.

Please confirm if you did set the enable-welcome-root to false.

Not the answer you're looking for? Browse other questions tagged java eclipse jboss wildfly or ask your own question.

1589
How do I create a Java string from the contents of a file?
589
.war vs .ear file
1427
How do I create a file and write to it?
1708
How can I avoid Java code in JSP files, using JSP 2?
351
How to deploy a war file in Tomcat 7
0
cvc-complex-type.2.2: Element 'location' must have no element [children]
0
Is it possible to write XMLSchema-instance in parent tag as well as child tag?
3
Deployments Share JAR Files in WildFly 10
16
IntelliJ + Spring Web MVC