Can't view designer when coding a form in C#

I'm following this tutorial on winforms, and so far the tutorial is coding the form without using the toolbox. I believe it'll introduce the toolbox in more depth shortly.

Following the tutorial, I've made a partial class in the following two pieces of code:

When I run the code with F5, everything looks fine: The form pops up with the textbox.

But for some reason, when I right-click on the second file and choose "View Designer", I get an error which says "The variable 'txtbox' is either undeclared or was never assigned". I can choose to "Ignore and Continue", which leads me to a form with no textbox on it.

Why does this occur? I know some of you think I should just use the toolbox, and it's probably the most sensible thing to do, but I would still like to understand why this happens.

When you open a Form in windows forms designer, the designer looks into the first class in the file. If the file has a Designer.cs containing the other partial part of the class, also includes it and tries to deserialize those file contents. In the process of deserialization and loading the design time of your form, it creates an instance of the base class of your form and looks in those files for component declarations and InitializeComponents method. If find them creates components and sets properties of them using deserialized codes and add components to the instance of base class which created.

Take a look at below code, which has some serious problems:

But the interesting news is you can see the form in designer, even with those errors!

Just create a file in your project and put below codes in the file and save the file and close it. Then without trying to build the solution, open the form in designer. Here is code:

And here is screenshot of designer: 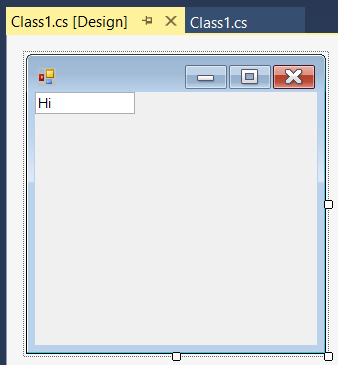 To find more information, take a look at this link:

Solution for your question

As a solution, it is enough for you to move private Numeric txtbox; and put it your seccond file in Exercise class.

The declaration of the controls should be put into Designer.cs files in order Visual Studio can just compile this unit and display it.

When you launch the app, the compiler takes into account all parts of your partial class then it finds txtBox declaration.

Not the answer you're looking for? Browse other questions tagged c# .net winforms visual-studio windows-forms-designer or ask your own question.

1568
Why is it important to override GetHashCode when Equals method is overridden?
1511
When should I use a struct rather than a class in C#?
880
When to use .First and when to use .FirstOrDefault with LINQ?
0
Dataset.GetChanges(DataRowState.Modified) return null
0
The best overloaded method match for 'XDevkit.IXboxDebugTarget.GetMemory(uint, uint, byte[], out uint)' has some invalid arguments
1239
How and when to use ‘async’ and ‘await’
0
Why can't I see my button on my form?
0
How to reference subclassed txtbox in form
0
C# Output wont go to TextBox in a Form