I am trying to install a Windows service using InstallUtil.exe and am getting the error message

System.BadImageFormatException: Could not load file or assembly '{xxx.exe}' or one of its dependencies. An attempt was made to load a program with an incorrect format.

EDIT: (Not by OP) Full message extracted from dup getting way more hits [for googleability]:

Exception occurred while initializing the installation: System.BadImageFormatException: Could not load file or assembly 'file:///C:\xxx.exe' or one of its dependencies. An attempt was made to load a program with an incorrect format..

Some more detail for completeness in case it helps someone...

In other words, running:

Finally, note that in Visual Studio 2010, the tooling will default to generating x86 binaries (rather than Any CPU as previously).

Complete details of System.BadImageFormatException (saying the only cause is mismatched bittedness is really a gross oversimplification!).

Make sure the newest Framework (the one you compiled your app with) is first in the PATH. That solved the problem for me. (Found on a forum)

The key is to set match processor settings for the project which are at two places.

And also make sure the architecture settings is same in Test menu >> Test Settings >> Default Processor Architecture >> as show below.

This is for VS2013 but maybe same for other versions too.

I think you are using the 64-bit version of the tool to install a 32-bit application. I've also faced this issue today and used this Framework path to cater .

and it should install your 32-bit application just fine.

OK, this is the problem I had, and, what fixed it, seems very relevant to the above.

I am using Visual Studio 2010 Express. I wrote a test service that didn't really do anything. It was just practice for the real thing later.

I wrote the service and tried to install it using installutil.exe and got the following error:

System.BadImageFormatException: Could not load file or assembly '{filename.exe}' or one of its dependencies. An attempt was made to load a program with an incorrect format.

So far the same as the original author.

Ruben's observation above about the 32 bit output of Visual Studio 2010 was the saviour here.

I hope this helps someone else out there.

After trying all the mentioned solutions I found the PlatformTarget somehow added to AnyCPU configuration in my project .csproj.

Removing the line worked for me.

I had this issue with a WinForms Project using VS 2015. My solution was:

I had the same issue. I using the standard command for execution. It was calling the X64 ro run against X86 tests. I needed to specify the X86 and not the X64 version of the nunit-runner.

Summarizing, both the Build and Project\Build\Platform has to be set to x64 in order to successfully install 64 bit service on 64 bit system.

My issue was different. This occurred after an unexpected shutdown of my windows 7 machine. I performed a clean solution and it ran as expected.

In the case of having this message in live tests, but not in unit tests, it's because selected assemblies are copied on the fly to $(SolutionDir)\.vs\$(SolutionName)\lut\0\0\x64\Debug\. But sometime few assemblies can be not selected, eg., VC++ dlls in case of interop c++/c# projects.

Post-build xcopy won't correct the problem, because the copied file will be erased by the live test engine.

The only workaround to date (28 dec 2018), is to avoid Live tests, and do everything in unit tests with the attribute [TestCategory("SkipWhenLiveUnitTesting")] applied to the test class or the test method. 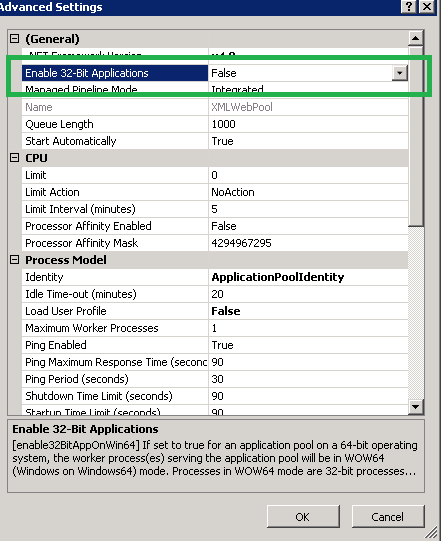 I have faced this issue today. In my case, my application's (had a reference to a 64-bit dll) platform target was set to AnyCPU but Prefer 32-bit check box under platform target section was ticked by default. This was the problem and worked all fine after un-checking Prefer 32-bit option.

We found a different solution to a problem with the same symptom:

The problem was that even though we were not referencing System.Net.Http any more in the project, it was listed in the dependentAssembily section of our web.config. Removing this and any other unused assembly references from the web.config solved the problem.

The problem is that every System.BadImageFormatException: Could not load file or assembly including the ones not associated with installutil.exe at all point to this very thread.

Not the answer you're looking for? Browse other questions tagged .net windows-services x86 64-bit x86-64 or ask your own question.