I'm dusting off an old project of mine. One of the things it had to do was -- given a Cartesian grid system, and two squares on the grid, find a list of all squares that a line joining the center of those two squares would pass through.

The special case here is that all start and end points are confined to the exact center of squares/cells.

Here are some examples -- with pairs of sample starting and ending points. The shaded squares are the ones that should be returned by the respective function call

The starting and end points are referred to by the squares they are in. In the above picture, assuming that the bottom left is [1,1], the line on the bottom right would be identified as [6,2] to [9,5].

Which really doesn't seem that complicated. However, I somehow seemed to have found some complex algorithm online and implemented it.

I do recall that it was very, very fast. Like, optimized-for-a-hundreds-or-thousands-of-times-per-frames fast.

Which is sort of okay in concept, but the actual implementation turned out to be pretty not-so-pretty, and I'm afraid that the level of optimization might be way too high for what I practically need (I'm calling this traversal algorithm maybe five or six times a minute).

Is there a simple, easy-to-understand, transparent straight-line grid traversal algorithm?

where the given coordinates identify the squares themselves.

Note that lines that move directly through corners should not include squares on the "wing" of the line.

(Good ol' Bresenham's might work here, but it's a bit backwards from what I want. As far as I know, in order to use it, I'd basically have to apply it to the line and then scan every single square on the grid for true or false. Infeasible -- or at least inelegant -- for large grids)

(I am re-looking into Bresenham, and Bresenham-based algorithms, due to a misunderstanding of mine)

For clarification, one possible application of this would be, if I was storing all of my objects in a game inside zones (a grid), and I have a ray, and want to see which objects the ray touches. Using this algorithm, I could test the ray to only the objects that are within the given zones, instead of every object on the map.

The actual use of this in my application is that every tile has an effect associated with it, and an object moves through a given line segment every turn. At every turn, it is necessary to check to see which squares the object has traversed through, and therefore, which effects to apply to the object.

Note that, at this point, the current implementation I have does work. This question is mostly for curiosity's purpose. There has to be a simpler way...somehow...for such a simple problem.

What am I looking for exactly? Something conceptually/neat and clean. Also, I've realized that due to what I am exactly specifying, all start and end points are always going to be in the center of squares/cells; so perhaps something that takes advantage of that would be neat as well.

What you want is a particular case of a supercover, which is all of the pixels intersected by a geometric object. The object may be a line or a triangle, and there are generalizations to higher dimensions.

Anyways, here is one implementation for line segments. That page also compares the supercover with the result of Bresenham's algorithm - they are different. 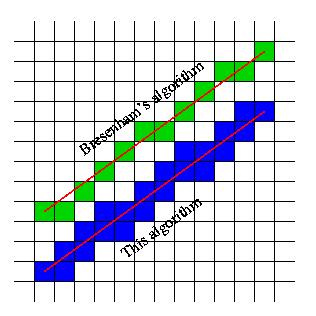 I don't know whether you consider the algorithm there as elegant/clean, but it certainly seems simple enough to adapt the code and move on to other parts of your project.

By the way, your question implies that Bresenham's algorithm is not efficient for large grids. That's not true - it generates only the pixels on the line. You don't have to do a true/false test for every pixel on the grid.

Update 1: I noticed that in the picture there are two 'extra' blue squares that I believe the line does not pass through. One of them is adjacent to the 'h' in 'This algorithm'. I don't know if that reflects an error in the algorithm or the diagram (but see @kikito's comment below).

In general, the 'hard' cases are probably when the line passes exactly through a grid point. I speculate that if you are using floating point that float point error may mess you up in these cases. In other words, algorithms should probably stick to integer arithmetic.

A paper on this topic can be found here. This is in regards to raytracing, but that seems quite relevant to what you are after anyway, and I assume you will be able to work with it a bit.

There is also another paper here, dealing with something similar.

Both of these papers are linked in part 4 of Jakko Bikker's excellent tutorials on raytracing (which also include his source code, so you can browse / examine his implementations).

There's a very easy algorithm for Your problem that runs in linear time:

An optimized implementation needs Θ(|B.x - A.x| + |B.y - A.y|) time for a line (A, B). Further, one can write this algorithm to determine intersection points with horizontal grid lines, if that is easier for the implementer.

As brainjam correctly points out in his answer, the hard cases are the ones, when a line goes exactly through a grid point. Lets assume such a case occurs and the floating point arithmetic operations correctly return a intersection point with integral coordinates. In this case, the proposed algorithm marks only the correct cells (as specified by the image provided by the OP).

However, floating point errors will occur sooner or later and yield incorrect results. From my opinion even using double won't suffice and one should switch to a Decimal number type. An optimized implementation will perform Θ(|max.x - min.x|) additions on that data type each one taking Θ(log max.y) time. That means in the worst case (the line ((0, 0), (N, N)) with huge N (> 106) the algorithm degrades to a O(N log N) worst case runtime. Even switching between vertical/horizontal grid line intersection detection depending on the slope of the line (A, B) doesn't help in this worst case, but it sure does in the average case - I would only consider to implement such a switch if a profiler yields the Decimal operations to be the bottle neck.

Lastly, I can imagine that some clever people might be able to come up with a O(N) solution that correctly deals with this border cases. All Your suggestions are welcome!

brainjam pointed out, that a decimal data type is not satisfying even if it can represent arbitrary precision floating point numbers, since, for example, 1/3 can't be represented correctly. Therefore one should use a fraction data type, which should be able to handle border cases correctly. Thx brainjam! :)

Here is a simple implementation in Python, using numpy. However, what is used here is only 2D vectors and component by component operations which is rather common. The result looks quite elegant to me (~20 loc without comments).

This is not general as it assumes tiles are centered at integer coordinates, while separating lines appear at each integer plus one half (0.5, 1.5, 2.5, etc.). This allows to use rounding to get tile integer coordinates from world coordinate (which is not actually needed in your special case) and gives the magic number 0.5 to determine when we have reached the last tile.

Finally, note that this algorithm does not deal with point exactly crossing the grid at an intersection.

Not the answer you're looking for? Browse other questions tagged algorithm language-agnostic math geometry raytracing or ask your own question.

28
How to find all grid squares on a line?
0
Algorithm to find grid spaces in between two cells

61
How to find two most distant points?
28
How to find all grid squares on a line?
271
Generate a random point within a circle (uniformly)
5
Algorithm to find special point k in O(n log n) time
1181
Ukkonen's suffix tree algorithm in plain English
21
How do I initialize the t-variables in "A Fast Voxel Traversal Algorithm for Ray Tracing"?
1
Drawing an almost straight line
9
Rotated rectangle rasterisation algorithm
0
Algorithm for translating list of wallsections into coherent polygon