I have some fixed strings inside my strings.xml, something like:

and in my layout I've got a TextView which I'd like to fill with the html-formatted string.

because I use this in other parts of my program where it is working as expected.

To call this function I need an Activity, but at the moment my layout is just a simple more or less static view in plain XML and I'd prefer to leave it that way, to save me from the overhead of creating an Activity just to set some text.

Am I overlooking something obvious? Is it not possible at all? Any help or workarounds welcome!

Edit: Just tried some things and it seems that HTML formatting in xml has some restraints:

Just in case anybody finds this, there's a nicer alternative that's not documented (I tripped over it after searching for hours, and finally found it in the bug list for the Android SDK itself). You CAN include raw HTML in strings.xml, as long as you wrap it in

Then, in your code:

IMHO, this is several orders of magnitude nicer to work with :-)

August 2021 update: My original answer used Html.fromHtml(String), which was deprecated in API 24. The alternative fromHtml(String,int) form is suggested as its replacement.

FROM_HTML_MODE_LEGACY is likely to work... but one of the other flags might be a better choice for what you want to do.

On a final note, if you'd prefer to render Android Spanned text suitable for use in a TextView using Markdown syntax instead of HTML, there are now multiple thirdparty libraries to make it easy including https://noties.io/Markwon.

As the top answer here is suggesting something wrong (or at least too complicated), I feel this should be updated, although the question is quite old:

When using String resources in Android, you just have to call getString(...) from Java code or use android:text="@string/..." in your layout XML.

Even if you want to use HTML markup in your Strings, you don't have to change a lot:

The only characters that you need to escape in your String resources are:

That means you can add your HTML markup without escaping the tags:

However, to be sure, you should only use <b>, <i> and <u> as they are listed in the documentation.

If you want to use your HTML strings from XML, just keep on using android:text="@string/...", it will work fine.

The only difference is that, if you want to use your HTML strings from Java code, you have to use getText(...) instead of getString(...) now, as the former keeps the style and the latter will just strip it off.

You will only need Html.fromHtml(...) if you did encode your special characters in HTML markup. Use it with getString(...) then. This can be necessary if you want to pass the String to String.format(...).

This is all described in the docs as well.

There is no difference between getText(...) with unescaped HTML (as I've proposed) or CDATA sections and Html.fromHtml(...).

See the following graphic for a comparison: 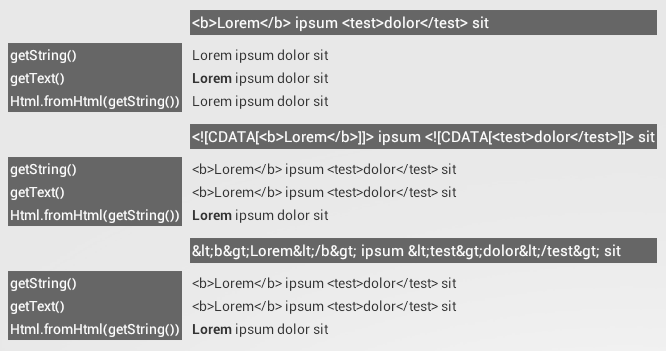 Android does not have a specification to indicate the type of resource string (e.g. text/plain or text/html). There is a workaround, however, that will allow the developer to specify this within the XML file.

Once you define these, you can express yourself with HTML in xml files without ever having to call setText(Html.fromHtml(...)) again. I'm rather surprised that this approach is not part of the API.

This solution works to the degree that the Android studio simulator will display the text as rendered HTML.

res/values/strings.xml (the string resource as HTML)

layout.xml (only the relevant parts)

Declare the custom attribute namespace, and add the android_ex:isHtml attribute. Also use the subclass of TextView.

res/values/attrs.xml (define the custom attributes for the subclass)

TextViewEx.java (the subclass of TextView)

Following code give support to android N and above versions...

I have another case when I have no chance to put CDATA into the xml as I receive the string HTML from a server.

Here is what I get from a server:

It seems to be more complicated but the solution is much simpler.

0
How do I set part of the description of a Radio button to be bold?
0
Format different parts of text that is in a container in android studio
389
Html.fromHtml deprecated in Android N
102
Android: html in strings.xml
47
How to display html formatted text in ios label
49
android string.xml reading html tags problem
29
Android: getString() from resources loses any tags in the string
13
Android TextView in BOLD and Normal text
15
Set text in TextView using Html.fromHtml
5
HTML formatting for TextView
See more linked questions

2288
How do I center text horizontally and vertically in a TextView?
813
Strip HTML from Text JavaScript
878
How to display HTML in TextView?
1887
How can I set the default value for an HTML <select> element?
2282
How do you parse and process HTML/XML in PHP?
604
How to set the text color of TextView in code?
979
Auto Scale TextView Text to Fit within Bounds
1787
How to redirect one HTML page to another on load
945
How to set TextView textStyle such as bold, italic
1380
How do I reformat HTML code using Sublime Text 2?