Why do we need these 3 particular image types?

If I have a button on my app with a background image say, 50 pixels x 50 pixels, why do I need 3 versions of this image? What's stopping me from just making one image that's much higher in res, say, 700x700 so when it shrinks down on any iPhone it won't fall under the max res the device would want?

Only thing I can think of is it just takes up more space, but for simple apps / a simple button it seems like it wouldn't cause any issues. I've tried it on a few devices and see no difference between them when I simulate it and do this method. However, as I dive more into apps and stuff I'm sure there is substance behind this technique.

If you don't have the exact size, there are two things that can happen:

@3x or @2x can be upscaled from @1x but usually the visual result is blurry, with thick lines and doesn't look good. Upscaling @3x from @2x can be even worse because subpixels must be used.

In general, the results are much better than with upscaling, however, that doesn't apply for all the images. If you have a 1px border on a @3x image, after downscaling it to @1x the border won't be visible (0.33px). The same applies for any small objects in the image. Downscaling destroys all details.

In general - for an image to look perfect, you want to avoid both downscaling and upscaling. You can always go with only @2x or @3x images and add other scales only if you see visual problems. Using higher resolution won't improve downscaling. High resolutions are used only to avoid upscaling. Downscaling from a high scale (e.g. @100x) to @1x won't create better results than downscaling from @3x.

Thus for providing same image in 3 scales iOS decides which image to show for which devices.Hope could help you understand this. 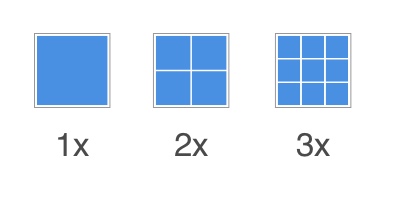 It is because if you provide one high resolution graphic it would be waste of space on a users' device. Thanks to app slicing the device will download (from App Store) only the parts that actually fits the device (so retina device won't download non retina graphics). This is why Apple created assets catalogs and this kind of rules to follow. They describe it in their sessions.

First of all, you need to know points vs. pixels behaviour. On non-retina devices, point vs pixels ratio is 1point=1pixel. On retina devices, there are two ratios: 1point = 2x2 pixels depending on screen size, and 1point=3x3 pixels, because of pixels density, that is quadrupled watching on non retina.
That's why you need this 3 types of images, to be shown on its highest resolution.

Because you didn't propitiated proper images for a specific device, it has to downscale or upscale. These processes will use up your memory and processing, resulting maybe in a decrease of performance, depending on how many images at a time you're doing it and the size of image.

If you provide only one big image you encounter several problems:

As you can see, producing only one image will impact the performance and quality of your app and it will disproportionately hit those with older devices. This is because:

Due to this users are likely to be unhappy and this is bad for you. Because, from my experience, unhappy users are 10 times more likely to rate your app than happy users. You don't want that, do you? :)

Not the answer you're looking for? Browse other questions tagged ios image resolution pixels or ask your own question.

25
iOS: Preparing background images for applications
11
Xcode images explanation
3
Use different image resolutions for different iOS devices
3
Do I need the different image sizes for the Xcode assets?
1
Is it possible to not include 1x of image asserts in Flutter?
0
UIImage being displayed as opaque square (IOS Swift)

1321
Strange out of memory issue while loading an image to a Bitmap object
1968
How to lazy load images in ListView in Android
792
Changing the image source using jQuery
1625
How do I auto-resize an image to fit a 'div' container?
257
Aligning text and image on UIButton with imageEdgeInsets and titleEdgeInsets
1537
How to vertically align an image inside a div
1059
Changing image size in Markdown
141
Image resolution for new iPhone 6 and 6+, @3x support added?
24
Why does iPhone 6 use @2x image assets?