I have a really annoying problem since several days, after I tried to restore a previously working Android Studio project from a backup, after getting a new computer.

I have the "cannot resolve symbol" syntax highlighting problem with the classes from Android libraries such as android.support.v7.app, android.support.v4.app, and Google Play Services, which I have included as dependencies. But, the project builds fine and I can run the App on phone with no problems.

I have verified whether these jar files exist under SDK installation - for e.g. "\sdk\extras\android\m2repository\com\android\support\appcompat-v7\23.0.1".

My problem is quite similar to the ones reported in below posts:

Please do help if you have any other suggestions!

Extract from my build.gradle:

Screenshots of the problems can also be found below. I think Android Studio is not able to import the dependent libraries for syntax highlighting, although the compiler is able to include them and build successfully. 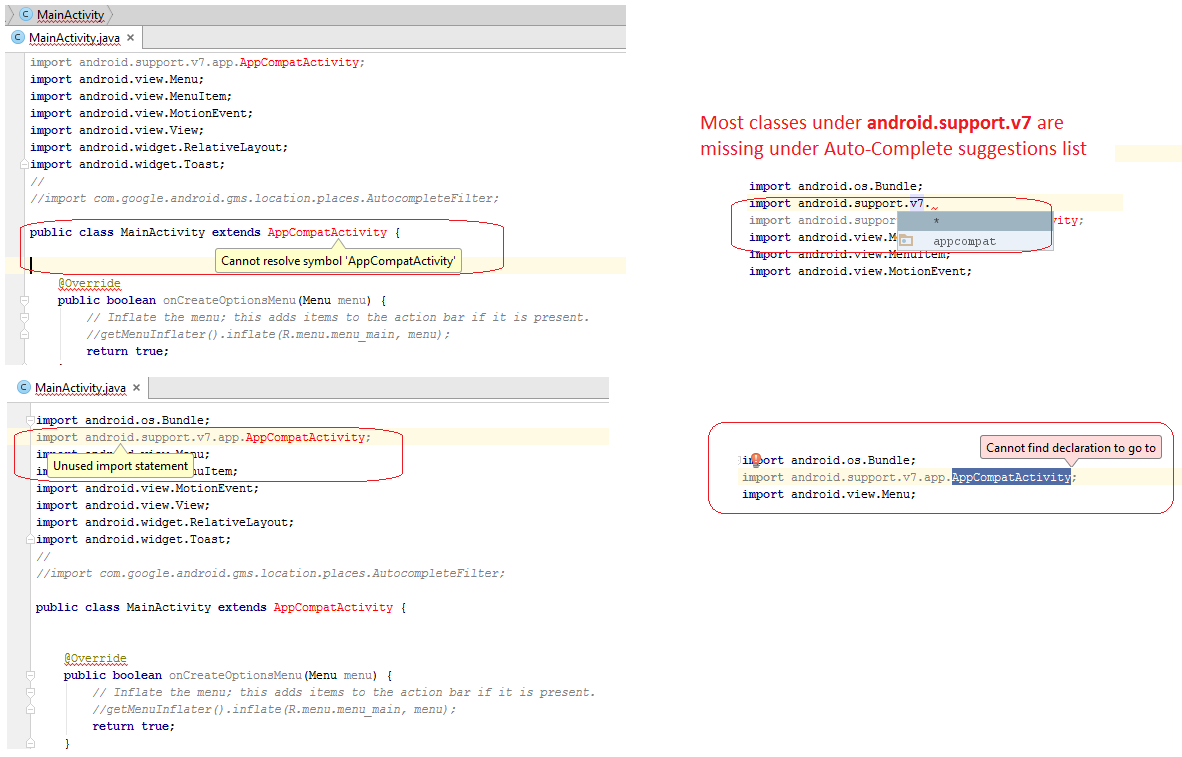 The reason is because I had a '!' symbol in my project path. Apparently, as I learnt now, many Java programs fail due to this reason! :-)

I just renamed the path and it works fine now :-)

Thank you @gabriele-mariotti for the gradlew clean suggestion. In fact, that helped me find the real root cause. I was not able to run gradlew from the terminal due to a RuntimeException:

But that helped me learn about the effect of '!' symbol on paths, and to the root cause of the problem. Thank you all!

I had this very same problem with two libraries in our project, com.koushikdutta.ion and uk.co.senab.photoview which are used thoughout our multi-app project but are declared as dependencies deep down a library project. The symptoms were like this:

My solution is as follows: first of all, close Android Studio. Then :

re-open Android Studio but select the option "Open an existing Android Studio project". Wait for the project to be reparsed and enjoy perfect cleanness.

Not the answer you're looking for? Browse other questions tagged java android android-studio intellij-idea android-gradle-plugin or ask your own question.