I'm using SourceTree for easy code reviewing before committing. Within SourceTree I often stage and commit only part of the lines which I changed in a document.

A couple days ago I received a piece of code from a programmer working on Windows, which caused some trouble with line endings. If I remember correctly, I then set core.autocrlf to true, which fixed the issues with the windows file. Since that moment however, I'm having major issues in another repo I'm working on. If I want to stage only part of a file in SourceTree I now get a massive error saying git apply' failed with code 1: [/a/long/path/here] trailing whitespace in SourceTree. So I figured I needed to set core.autocrlf back to what it was, which I "assumed" to be ("mother of all.. etc") false (I never messed with core.autocrlf before). So I set it to false which suddenly makes all files on which I change only one letter to be marked as having changed ALL lines in the file, which is obviously a major hassle during code review.

So I searched around and I found some examples of solutions here on SO, but that all uses adding extra parameters to git add and doing all kinds of weird stuff. Next to the fact that I don't think I can insert custom commands in the GUI of SourceTree I mostly wondered; How did it get so messy? And most importantly can't I just go back to how it was (whatever that was) instead of having to issue extra command everytime that I want to stage and commit?

Please note; I'm not afraid of the command line, I work in it pretty much the whole day. But I just like doing code reviews in a GUI such as SourceTree.

Any tip which helps me get things back to normal would greatly help me out!

git line-endings core.autocrlf
Share
Improve this question
edited May 23 '17 at 12:02 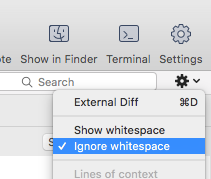 There is a discussion on Atlassian Community about this problem. The fix is to switch setting Show Whitespace to Ignore Whitespace.

In your ~/.gitconfig, try adding the following section:

The full details of what this does are covered at https://git-scm.com/docs/git-apply

Seems like the default for SourceTree under OS X is "error", at least with git 2.6.4. Or it may be interacting with our default of core.autocrlf = true

Not the answer you're looking for? Browse other questions tagged git line-endings core.autocrlf or ask your own question.

1974
How to recover a dropped stash in Git?
3519
Undoing a git rebase
3360
View the change history of a file using Git versioning
2980
How to find and restore a deleted file in a Git repository
2286
How do I show the changes which have been staged?
5516
Move the most recent commit(s) to a new branch with Git
3336
Stash only one file out of multiple files that have changed with Git?
689
Pushing to Git returning Error Code 403 fatal: HTTP request failed
2670
What does cherry-picking a commit with Git mean?
687
How to change line-ending settings