I am trying to implement neural network with RELU.

Above is the architecture of my neural network. I am confused about backpropagation of this relu. For derivative of RELU, if x <= 0, output is 0. if x > 0, output is 1. So when you calculate the gradient, does that mean I kill gradient decent if x<=0?

Can someone explain the backpropagation of my neural network architecture 'step by step'?

So for the derivative f '(x) it's actually:

The derivative f '(0) is not defined. So it's usually set to 0 or you modify the activation function to be f(x) = max(e,x) for a small e.

Generally: A ReLU is a unit that uses the rectifier activation function. That means it works exactly like any other hidden layer but except tanh(x), sigmoid(x) or whatever activation you use, you'll instead use f(x) = max(0,x).

If you have written code for a working multilayer network with sigmoid activation it's literally 1 line of change. Nothing about forward- or back-propagation changes algorithmically. If you haven't got the simpler model working yet, go back and start with that first. Otherwise your question isn't really about ReLUs but about implementing a NN as a whole.

If you have a layer made out of a single ReLU, like your architecture suggests, then yes, you kill the gradient at 0. During training, the ReLU will return 0 to your output layer, which will either return 0 or 0.5 if you're using logistic units, and the softmax will squash those. So a value of 0 under your current architecture doesn't make much sense for the forward propagation part either.

I would reconsider this architecture however, it doesn't make much sense to me to feed a single ReLU into a bunch of other units then apply a softmax.

Here is a good example, use ReLU to implement XOR: reference, http://pytorch.org/tutorials/beginner/pytorch_with_examples.html

More about the derivate of ReLU, you can see here: http://kawahara.ca/what-is-the-derivative-of-relu/

Yes the orginal Relu function has the problem you describe. So they later made a change to the formula, and called it leaky Relu In essence Leaky Relu tilts the horizontal part of the function slightly by a very small amount. for more information watch this :

An explantion of activation methods, and a improved Relu on youtube

So when you calculate the gradient, does that mean I kill gradient decent if x <= 0?

Can someone explain the backpropagation of my neural network architecture 'step by step'?

A simple example can show one step of backpropagation. This example covers a complete process of one step. But you can also check only the part that related to Relu. This is similar to the architecture introduced in question and uses one neuron in each layer for simplicity. The architecture is as follows: 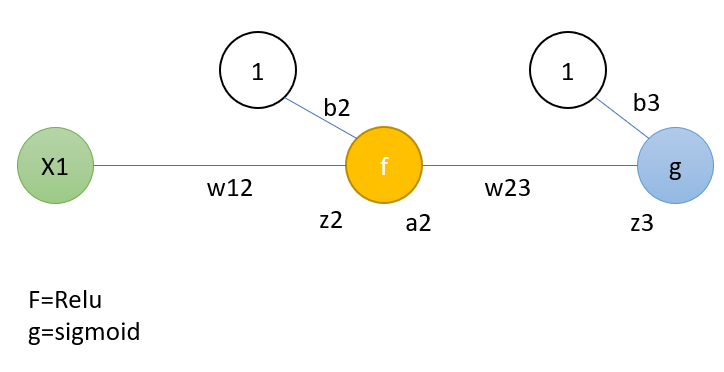 f and g represent Relu and sigmoid, respectively, and b represents bias. Step 1: First, the output is calculated: 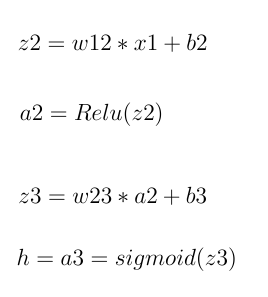 This merely represents the output calculation. "z" and "a" represent the sum of the input to the neuron and the output value of the neuron activating function, respectively. So h is the estimated value. Suppose the real value is y.

Weights are now updated with backpropagation.

The new weight is obtained by calculating the gradient of the error function relative to the weight, and subtracting this gradient from the previous weight, ie:

In backpropagation, the gradient of the last neuron(s) of the last layer is first calculated. A chain derivative rule is used to calculate:

And the above statement does not necessarily become zero.

Otherwise, it's not necessarily zero:

So if the input of neurons is less than zero, the loss derivative is always zero and weights will not update.

*It is repeated that the sum of the neuron inputs must be less than zero to kill gradient descent.

The example given is a very simple example to illustrate the backpropagation process.

Additionally, here you can find an implementation in caffe framework: https://github.com/BVLC/caffe/blob/master/src/caffe/layers/relu_layer.cpp

The negative_slope specifies whether to "leak" the negative part by multiplying it with the slope value rather than setting it to 0. Of course you should set this parameter to zero to have classical version.

Not the answer you're looking for? Browse other questions tagged neural-network backpropagation or ask your own question.