How to scale Orion GE?

I have deployed an Orion instance in FILAB and I have configured the Cygnus inyector in order to store information in Cosmos.

But...let us imagine a scenario in which the number of entities increases drastically. In this hypothetical scenario one instance of Orion GE wouldn't be enough so it would be necessary to deploy more instances.

What would be the scale procedure? Taking into account the maximum quotas are:

I understand that quotas may be subject to changes but what would be the free account limit?

What would be the Hard disk limit in Cosmos Head Node? (Theoretically 5GB quota)

Would it be possible to deploy more instances of Orion Context Broker with a single public IP or would it be necessary to ask for multiple public ips? How?

To sum up, I request information about the scale procedure for the proposed scenario and the free account limits (maximum quotas possible).

Thank you in advance. Kind Regards.

Regarding Orion scalability, it could involve two dimensions: 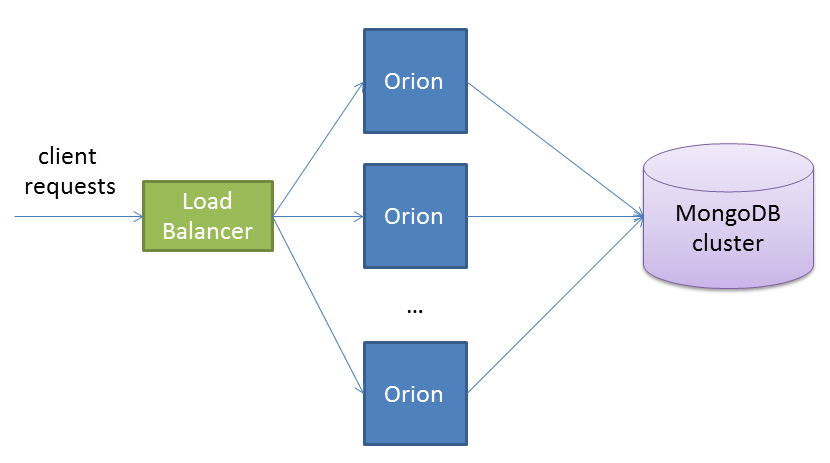 In any case, you would need additional VMs. You don't need additional IPs, as long as the system only needs a public IP (the one assigned to the load balancer) and all the other communications can be done internally. Cloud quota information has been already answered by @flopez in another post.

Ragarding the persistence of data in Cosmos through Cygnus, the same way you create a farm of Orion processes you may add more Cygnus processes in charge of receiving notifications from the Orion farm. Simply define a mapping strategy for all you entities, defining subscriptions about which entities are going to be notified to which Cygnus process A, which other to Cygnus process B, etc. The problem is on the connectivity between these Cygnus farm and the Global Instance of Cosmos (located in the Internet). Assuming these cygnus farm is running on top of VMs with private addressing, you must install some kind of proxy in another VM in order to access Cosmos.

About the HDFS quota, yes, it is 5 GB by default, but can be changed on demand. It worths saying a new HDFS cluster will be released in the short-term, having a higher capacity of storage.

UPDATE: a more detailed workflow explanation for the subscription-update-notification case is provided in this separated Q&A post.

The capacity that is offered to the Trial Users (free account like you mention) is the following:

2
What would be the behavior of subscriptions and notifications in an Orion Load-Balancing scenario?
3
Load balanced Fiware Orion
1
HA Cluster deployment of Orion context broker
1
How can I improve socket hang up when connecting many devices?