How can I fold blocks of comments in Swift using Xcode the way I do it in Visual Studio?

Edit: It seems to be a bug which only occurs while using Xcode in combination with Swift. In Objective-C it seems to work fine. I sent out a bug report and will post the news from apple.

But I can't find a proper way to get the comments the way I did them in Visual Studio.

Sometimes I just want to comment things out and don't want to see them again until I decide otherwise so I have free space to think about a new approach to a problem. In this way I'm not distracted and find a better solution much easier. And if I don't find a more suitable solution I can still the use the "backup" within seconds.

How can I achieve this - which I have done in Visual Studio - in Xcode6 and Xcode7 Beta?

Here is a Screenshot which illustrates commenting in Visual Studio 2015:

I just want these tiny snippets which use one line of code and can easily be opened and uncommented.

The folding of comments in both Swift and Objective-C works in Xcode 9, by clicking in the comment and then pressing command+option+←.

For earlier Xcode versions, see my original answer below.

In Xcode versions before Xcode 9, comment folding didn't work for Swift, but rather only worked for Objective-C. (And the original question didn't specify the language.) And for it to work with Objective-C in Xcode 8 and earlier, you needed to turn on the code folding option under "Text Editing" in "Preferences": 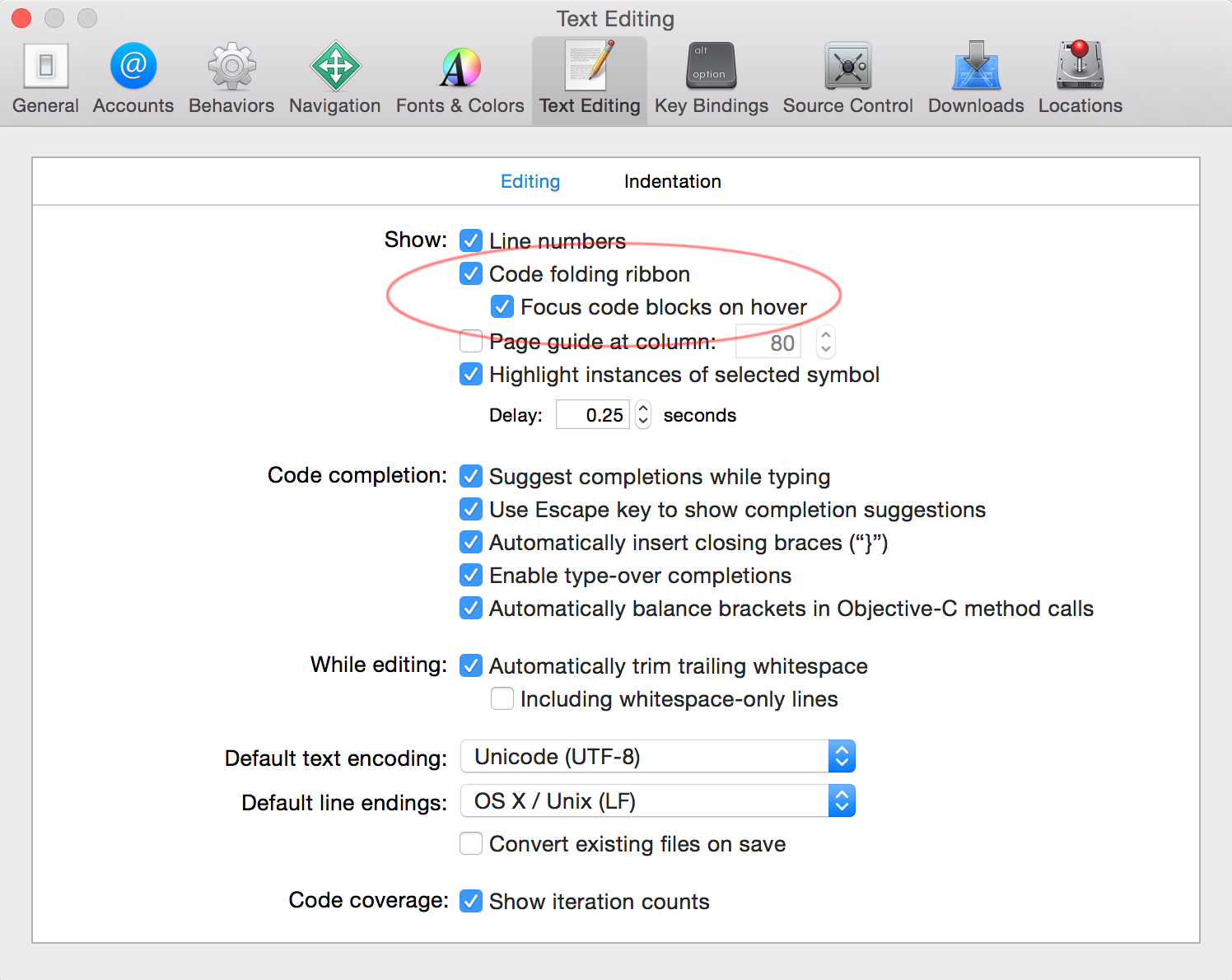 (In Xcode 9, code folding is always enabled and this option does not appear in Preferences.)

Then you can collapse the Objective-C comments by pressing command+option+← (or in Xcode versions prior to 9, you can click in the folding area in the left margin):

Currently (as of Xcode 7.2), you cannot fold Swift source files.

To fold Objective-C comments, you need to use a style of comment that has a begin and end like this:

Then, on the line where the comment begins, hover your cursor over the tiny column next to the line number, and click the arrow to fold it. Click the arrow again to unfold it.

In Swift I solve this problem in such way:

Just hover your mouse on the edge of the gutter at the start of the block comment and click the little arrow icon that appears.

I've reported this to Apple via their Bug Reporter. They've informed me that this was a known issue (actually a duplicate of issue 16188787 - still open as of this post).

You can see their response below;

Engineering has determined that your bug report is a duplicate of another issue and will be closed.

The open or closed status of the original bug report your issue was duplicated to appears in the yellow "Duplicate of XXXXXXXX" section of the bug reporter user interface. This section appears near the top of the right column's bug detail view just under the bug number, title, state, product and rank.

If you have any questions or concerns, please update your report directly here: http://bugreport.apple.com/.

I'm made a summary , it works for me. It's late but a good flow helps writing good code. for swift 3-4 only

In case where you want to write pseudo code first before actual code, you can write everything into a comment block

then because you might re-write but the logics are mostly the same, so you might not want to remove the comments, that's fine, but make sure they don't block your view, command+option+← . (looks like this is the default way of folding them. ) Then when you fold them, it looks like this: /*...

In case you don't like the key combo provided by xcode, you can define a short-cut.
to Define shortcut, go to Xcode => Preference => Key Bindings => fold comment block

then define it anyway you want, but be careful of conflicts.

It really pays to have pseudo code comments folded

Not the answer you're looking for? Browse other questions tagged xcode swift or ask your own question.

615
How can I indent multiple lines in Xcode?
412
Xcode “Build and Archive” from command line
2
Xcode project to Visual Studio
51
Xcode 6 Storyboard Unwind Segue with Swift Not Connecting to Exit
956
Swift Beta performance: sorting arrays
85
Swift Equatable Protocol
141
Sort Dictionary by keys
215
Why is Swift compile time so slow?
10
Xcode 7 - Swift TODO comments
33
How can I use Swift 2.3 in XCode 8 Playgrounds?