In my WebApi action method, I want to create/over-write a folder using this code:

Many filesystem operations are not synchonous on some filesystems (in case of windows - NTFS). Take for example RemoveDirectory call (which is called by Directory.DeleteDirectory at some point):

As you see, it will not really delete directory until all handles to it are closed, but Directory.DeleteDirectory will complete fine. In your case that is also most likely such concurrency problem - directory is not really created while you executing Directory.Exists.

So, just periodically check what you need and don't consider filesystem calls in .NET to be synchronous. You can also use FileSystemWatcher in some cases to avoid polling.

EDIT: I was thinking how to reproduce it, and here is the code:

You see that if all filesystem calls were synchronous (in .NET), this code should run without problem. Now, before running that code, create empty directory at specified path (preferrably don't use SSD for that) and open it with windows explorer. Now run the code. For me it either throws Confirmed (which exactly reproduces your issue) or throws on Directory.Delete saying that directory does not exist (almost the same case). It does it 100% of the time for me.

Here is another code which when running on my machine confirms that it's certainly possible for File.Exists to return true directly after File.Delete call: 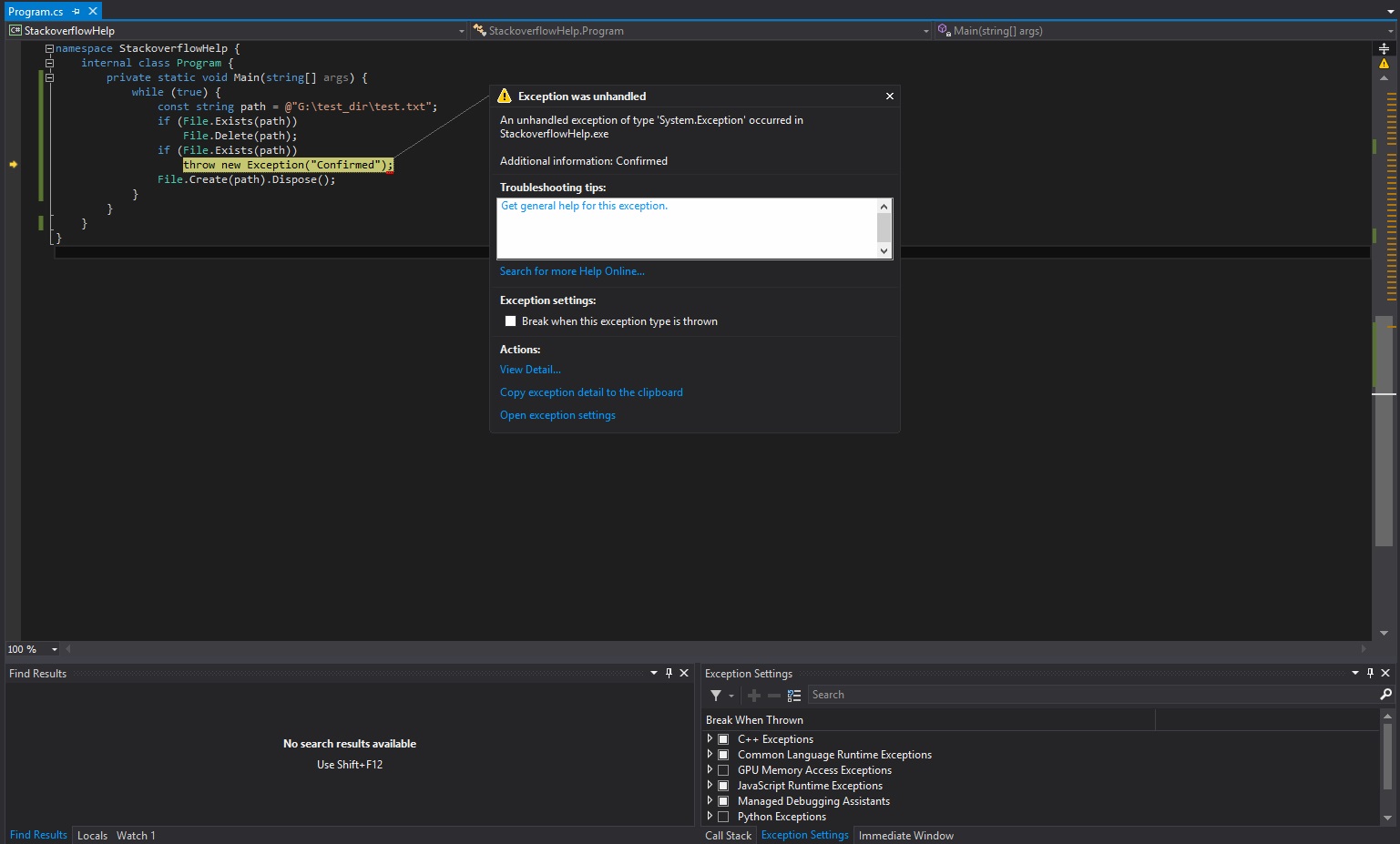 To do this, I opened G:\test_dir folder and during execution of this code tried to open constantly appearing and disappearing test.txt file. After couple of tries, Confirmed exception was thrown (while I didn't create or delete that file, and after exception is thrown, it's not present on filesystem already). So race conditions are possible in multiple cases and my answer is correct one.

Note that getting task.Result will block the thread until the task is finished, keeping the CPU load of this thread idle. So that is the point where it gets synchronous.

Sounds like race condition to me. Not sure why - you did not provide enough details - but what you can do is to wrap everything in lock() statement and see if the problem is gone. For sure this is not production-ready solution, it is only a quick way to check. If it's indeed a race condition - you need to rethink your approach of rewriting folders. May be create "GUID" folder and when done - update DB with the most recent GUID to point to the most recent folder?..

7412
What is the difference between String and string in C#?
1655
What is the difference between const and readonly in C#?
2357
Should 'using' directives be inside or outside the namespace?
2121
How do I create an Excel (.XLS and .XLSX) file in C# without installing Microsoft Office?
414
Cannot delete directory with Directory.Delete(path, true)
1871
What is a NullReferenceException, and how do I fix it?
908
If a folder does not exist, create it
1220
How do I get ASP.NET Web API to return JSON instead of XML using Chrome?
1367
How and when to use ‘async’ and ‘await’
1853
AddTransient, AddScoped and AddSingleton Services Differences