Separation of concerns and n-tiered architecture in ASP.NET 5/ASP.NET Core 1

I'm struggling to find a graceful way to keep my DAL layer separate to my MVC/UI layer in ASP.NET 5 thanks to the new built in Dependency Injection which I want to use.

For example I have an ASP.NET 5 project, a Business Layer project and a Data Access Project where I have various Entity Framework code such as entities and contexts. in ASP.NET 5 to get the context set up and targeting a database the main documentation is suggesting I do something like this in my StartUp.cs class

This means that I now have to reference my DAL in what is basically my UI layer, something which for years has always been bad practice according to the various experts and blog posts around.

One way I have worked around this is to create two new projects, one is a CompositeRoot project which contains factory classes to generate my business classes which then access the DAL and also a Utilities project with a Configuration class in which has a ConnectionString property which I can pass into my Context, I then use the built in DI to wire everything up and avoid referencing my DAL in my UI layer. But I've come across issues with the latest version of Entity Framework (beta 7) as it now doesn't seem possible to specify a connection string either in the constructor of the context or in the overrideable OnConfiguration method. Plus, all the documentation so far doesn't seem to care about this mixing of concerns at all. Is this just the way we do things now? Trust that developers won't do 'bad' things like reference DAL classes in the UI directly? Or is there a pattern people are employing to keep things SOLID with this new built in DI/configuration for ASP.NET 5?

If you ask 10 civil architects to build you a bridge, you’ll end up having 10 different architectures. Not one will be the same and not one will be better than the other.

Regardless of how many best practices and design patterns they apply, each architect will justify their idea. Some will be overzealous while others will keep it simple and get the job done. Amongst other things, budget, delivery dates and craftsmanship will have a direct impact on type of architecture you decide.

I’ve seen my fair share of architects having the best intentions in the world only to realize that the UI layer has a dependency on the DAL. Perhaps the reasoning behind this is that:

Back in MVC 5, I had the following layers:

The Web.Configuration layer had a dependency on Core, Data and Service. This layer is where I would configure my DI stuff.

The Web layer did not have a dependency on the Data layer and to get stuff started, I was using the Bootstrapper Nuget Package.

Perhaps you could achieve something similar with ASP.NET 5

I’d love for Microsoft (or anyone) to create a working project template that is more geared towards enterprise level samples using a decoupled approach or even something like an Onion Architecture sample.

In the end, whatever I consider like a reasonable decoupled architecture might be too much for some while not enough for others...

Feel free to share your findings as I’m curious to know how you’ve managed to make it work.

Is this really a major problem?

You UI layer will have a dependency on your data layer and there will be some reference somewhere.

The StartUp.cs adds various services and configuration, so most of these references are in one place.

You can probably get around that using a Service Locator.

For example, you have an interface in your root/core/abstractions project:

In your StartUp.cs, find all types that implements IServiceConfiguration and use that to register your external services.

And in your DAL, you can add a class that will register EF:

Not everyone would need this type of decoupling though. In some ways, it makes more sense to just register everything in StartUp.cs. You would've referenced your DAL in the web project anyway (unless everything is through dynamic discovery) and that means that it already knows something about your DAL.

I commented above but I figure many people might have the same question. 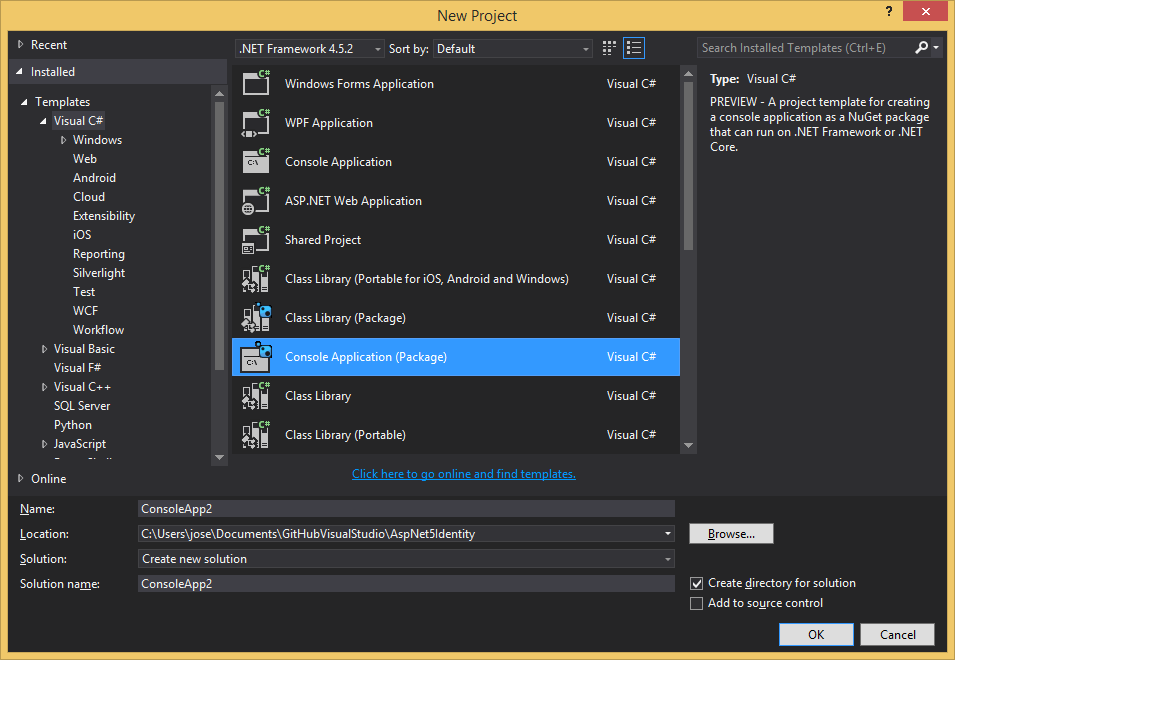 Do your code first things

Now go to your "web" project and a reference to your db. In your web project "project.json" you should see it invoked under dependencies.

I faced the same issue while working on a demo for MVC 6 today. after some research/trial and error, when i removed

from project.json file everything worked fine with me.

I was at the 2016 Global Azure Bootcamp recently and the sample project that we worked on (purely from an Azure perspective) has these separations of concerns laid out very well. I haven't spent a lot of time dissecting the project, but if anyone wants to look and see if this is a suitable N-Tier split please post back. The link is http://opsgilitytraining.blob.core.windows.net/public/modern-cloud-apps-student.zip. The separations are laid out as follows:

The reason that there is a reference to the data layer from the UI layer is because we need to register the DbContext (if you are using EF) in the IoC container.

You can get around this project/package reference using MEF (Manage Extensibility Framework). Check implementation of MEF in .NET Core as it has change from the previous .NET Framework.

In MEF, you can do it by convention or by configuration.

you can implement extension methods for IServiceCollection in your business layer and in your data access layer.

so this code could be in the data layer extension(s):

143
Ioc/DI - Why do I have to reference all layers/assemblies in application's entry point?

365
How do I get client IP address in ASP.NET Core?
625
How do you create a custom AuthorizeAttribute in ASP.NET Core?
545
Resolving instances with ASP.NET Core DI from within ConfigureServices
512
How to register multiple implementations of the same interface in Asp.Net Core?
334
ASP.NET Core Get Json Array using IConfiguration
337
Entity Framework Core: DbContextOptionsBuilder does not contain a definition for 'usesqlserver' and no extension method 'usesqlserver'
0
Using Asp.Net Core dependency injection to inject classes to other projects
2
How to reference .NET framework from ASP.NET Core
9
Separation of ASP.NET Core Identity ApplicationUser with relationship to Domain Model Entity