I have tried almost every trick in the book.

But nothing seems to work, below is my build.gradle. I'm using Gradle version 1.2.3. Can someone please throw light on what else could be wrong with my code.

The only thing I haven't tried is changing version of Gradle. It's a very basic Espresso Test case. Thanks!

Now both resolve to 23.1.0, the warning is gone, and the app and tests still work.

I'm not sure that it's the better solution, so I'm searching for another but found your question.

Update3: Another good response by CommonsWare. 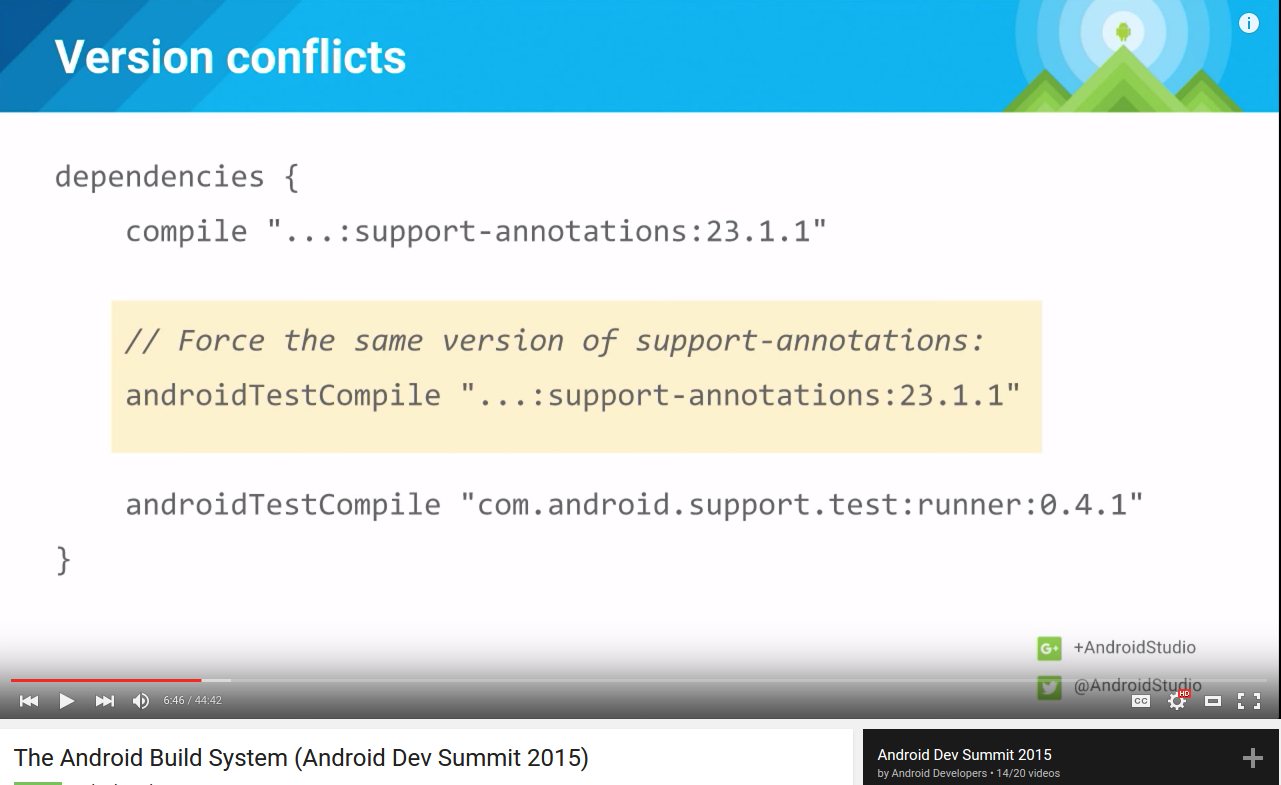 When instrumentation tests are run, both the main APK and test APK share the same classpath. Gradle build will fail if the main APK and the test APK use the same library (e.g. Guava) but in different versions. If gradle didn't catch that, your app could behave differently during tests and during normal run (including crashing in one of the cases).

To make the build succeed, just make sure both APKs use the same version. If the error is about an indirect dependency (a library you didn't mention in your build.gradle), just add a dependency for the newer version to the configuration ("compile" or "androidTestCompile") that needs it. You can also use Gradle's resolution strategy mechanism. You can inspect the dependency tree by running ./gradlew :app:dependencies and ./gradlew :app:androidDependencies.

I had the same issue, solved by this:

UPDATE: finally dependencies block in my build.gradle looks like this:

This happened to me recently when adding the uiautomator. To fix this issue, you need to figure out which dependency or dependencies is using the outdated module. You can do this by wrapping each androidTestCompile dependency into a block, like so:

This might break some other things though, so you need to be careful. I was able to pinpoint exactly which two of the dependencies was causing this issue for me, and just adding this blocking mechanism to those.

I solved the conflict by excluding the support-annotation library from both runner and espresso-core dependencies:

Add follow codes to your dependency block in build.gradle file

Add this to your main build.gradle:

androidTestCompile change to testCompile. And remind dont't change it to compile, just need this dependencies to be compiled into our debug APK or test APK.

For me this worked fine

In also got into the Problem saying

and tried to find in other servers ,

But what resolved my problem is adding :

and copy and paste it into

Then recompile it and i hope your code will fly

Use this for resolving conflict

Not the answer you're looking for? Browse other questions tagged android testing dependencies android-support-library or ask your own question.

5
Cannot open layout in Android Studio
12
What does mean "specified for property 'resDir' does not exist."
7
How to display Map on emulator
8
Kotlin fails to compile a library
3
Could not find class 'dalvik.system....'