Any way this can be done using watchman, like it happens for react-native ios.

You have to enable live reloading.

According to the tutorial:

For Android, run react-native run-android from your projectto install the generated app on your emulator or device, and start the Node server which enables live code reloading. To see your changes you have to open the rage-shake-menu (either shake the device or press the menu button on devices, press F2 or Page Up for emulator, ⌘+M for Genymotion), and then press Reload JS.

I am using MacOS X, with Genymotion. For some reason, yet to be determined, everything worked, the simulator ran, and my app was deployed to it with "react-native run-android". However, the "rage menu" would not display when I tried using the Command + M keyboard shortcut indicated in the instructions here:

For Android, run react-native run-android from AwesomeProject to install the generated app on your emulator or device, and start the Node server which enables live code reloading. To see your changes you have to open the rage-shake-menu (either shake the device or press the menu button on devices, press F2 or Page Up for emulator, ⌘+M for Genymotion), and then press Reload JS.

So ultimately, I wrote a tiny shell script (you could just run the same command directly off the command line in bash shell etc) called rageMenuAndroid.sh as follows:

This actually initiates the rage menu. From there it is simple to enable live reloading with React Native (my goal), just select "Auto Reload", and select the "Reload JS" button whenever you want to refresh.

If anyone knows how to get the 'rage menu' to appear on the simulator directly please can they post a comment below. Getting IOS set up was a breeze, taking all of 2 mins, Android on the other hand was some effort (perhaps a couple of hours, and I already had a JDK installed).

Got inspiration for this answer from reading this blog

For Android devices, I added a script that does the following to activate the rage menu. Basically presses "MENU" then "R" then "ENTER" (more info ADB Shell Input Events)

Here's a link to the shell script that works pretty well for me - https://github.com/r3bl-alliance/react-native-weather/blob/master/android_rage_menu.sh. I use Webstorm, so I just added it as a "run target" which makes it so convenient to work with! 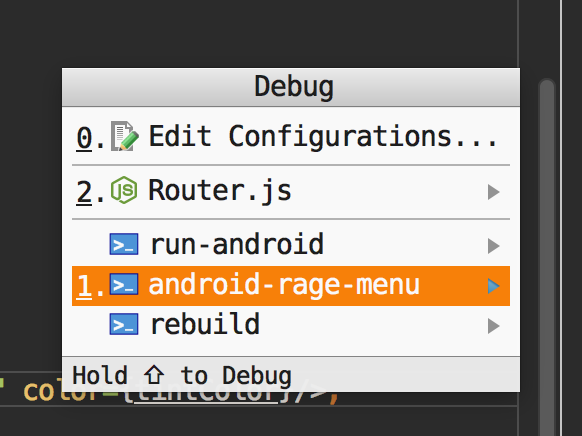 On physical android device (e.g. Xiaomi Redmi 4) you press down menu button for one second and select "Enable Hot Reloading" option. Then you might need to re-start the development server with

2085
Is there a way to run Python on Android?
1378
Strange OutOfMemory issue while loading an image to a Bitmap object
1027
Can't start Eclipse - Java was started but returned exit code=13
1068
Android Studio: Add jar as library?
262
How do I "shake" an Android device within the Android emulator to bring up the dev menu to debug my React Native app
1204
How do I "select Android SDK" in Android Studio?
305
How can I generate an apk that can run without server with react-native?
174
React-Native, Android, Genymotion: ADB server didn't ACK
453
Error Running React Native App From Terminal (iOS)