I've managed to get pyinstaller to run more or less correctly now, except that it opens too many windows. It's pygame project, and it keeps loading the entire thing over again every second or so. My PC fills with game windows after a few seconds and everything grinds to a halt.

Running it from commandline, I can just see print outs saying the app is starting pasted over and over again in commandline window. As far as I can tell the Apps aren't closing or exiting, just spawning more and more.

The command I call to start pyinstaller is this:

I tried commenting out the if __ name __ ... bit to see if for some reason it was executing the main function and calling a duplicate each time by accident or something. When commented out the exec does nothing, as you might expect.

Any ideas? I've not included any more code because there is loads of it, and I'm not sure which parts are relevant. Let me know if you need to see anything else.

EDIT: I added a quick print after the game.main_game_loop() just to check if the script jumped out of the infinite game loop. No such luck. It's loading a parallel instances of the scripts, all running simultaneously.

EDIT: I looked through the pyinstaller docs and managed to get some more debug out. Not sure if it's relevant or not, but here it is. This screen of dialog just keeps reprinting over and over again. I also tried the --noupx option which can sometimes help apparently - no such luck. 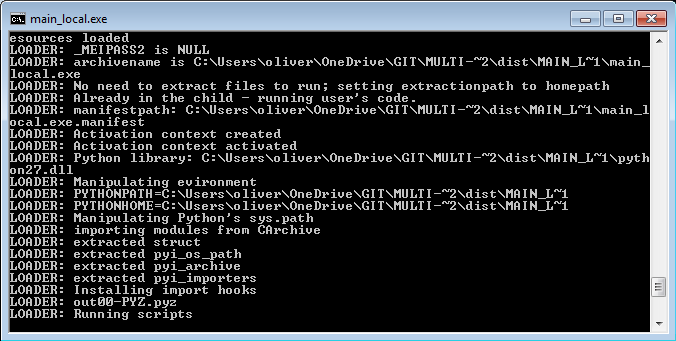 I tried some simpler python programs, and they packaged up all fine. So it wasn't a problem with my method it was the code. Thinking about it again, it must be some unusual or difficult to package code in the project. Hmmm, maybe threading?

I've got a couple of threads running in parallel, and they are multiprocessing threads. After googling about I found this magic fix.

You simply stick this line, multiprocessing.freeze_support(), straight after if __name__ == "__main__" and before you call the main() function.

It looks like the guys who develop the multiprocessing module had to include a hack to allow freeze packaging (py2exe, pyinstaller etc). Seems weird it isn't included a bit more smoothly. If you leave that freeze_support() call in, it still works even when you aren't running from packaged code as opposed to standard python files.

Anyway, if you are freezing/pacakaging code up and it seems to execute itself over and over, check if you are use multiprocessing. A simple google "multiprocessing pyinstaller" gave the answer.

FYI this only works on --onedir mode, --onefile mode is a different story and not supported on windows. You'll have to dig around more to solve that one.

I am using Pytorch to generate executable file. Works fine when run .py file, however when I generated exe file using pyinstaller, it's keep loop.

Not the answer you're looking for? Browse other questions tagged python pyinstaller or ask your own question.

1228
How to terminate a script?
1127
How to get file creation & modification date/times in Python?
601
How to import a module given its name as string?
1469
How can you profile a Python script?
1366
How do I check what version of Python is running my script?
3306
Catch multiple exceptions in one line (except block)
15
Pyinstaller image does not load
0
Pyinstaller: No module named 'scipy'
0
Pyinstaller 3.5 will not generate a standalone executable