confusion about int, char, and EOF in C

it's stated in the book that int c is used to hold EOF, which turns out to be -1 in my Windows machine with GCC and can't be represented by char. However, when I tried char c it works with no problem. Curiously I tried some more:

and the output is -1 -1 -1 with no character displayed (actually according to ASCII table for %c, c here there should be a nbs(no-break space) displayed but it's invisible).

So how can char be assigned with EOF without any compiler error?

Moreover, given that EOF is -1, are both b and e above assigned FF in memory? It should not be otherwise how can compiler distinguish EOF and nbs...?

most likely EOF 0xFFFFFFFF is cast to char 0xFF but in (c = getchar()) != EOF the the LHS 0xFF is int promoted to 0xFFFFFFFF before comparison so type of c can be either int or char.

In this case EOF happens to be 0xFFFFFFFF but theoretically EOF can be any value that requires more than 8 bits to correctly represent with left most bytes not necessarily being FFFFFF so then char c approach will fail. 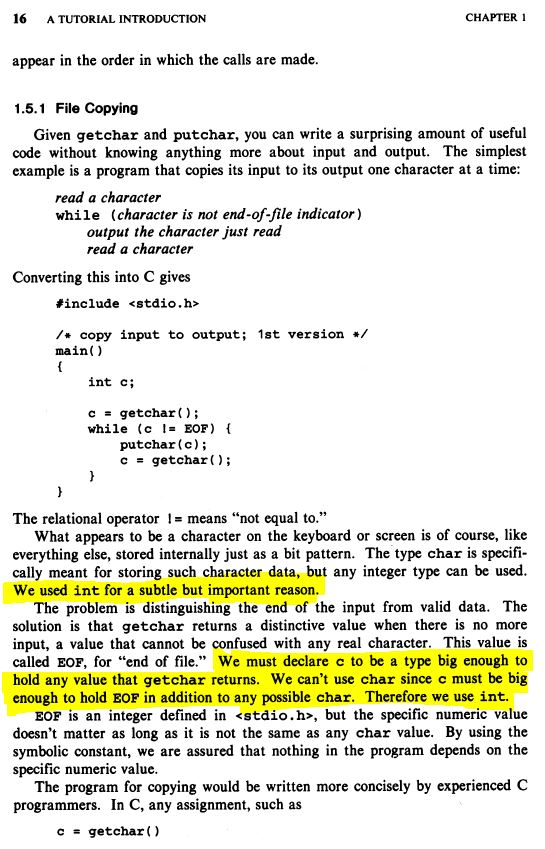 EOF and 0xFF are not the same. So compiler has to distinguish between them. If you see the man page for getchar(), you'd know that it returns the character read as an unsigned char cast to an int or EOF on end of file or error.

This code works because you're using signed chars. If you look at an ASCII table you'll find two things: first, there are only 127 values. 127 takes seven bits to represent, and the top bit is the sign bit. Secondly, EOF is not in this table, so the OS is free to define it as it sees fit.

The assignment from char to int is allowed by the compiler because you're assigning from a small type to a larger type. int is guaranteed to be able to represent any value a char can represent.

However, when represented as a 32 bit integer, it looks very different:

Not the answer you're looking for? Browse other questions tagged c char int eof or ask your own question.

5
Using int for character types when comparing with EOF
0
What does it mean to "flush the input buffer"?