CMake error at CMakeLists.txt:30 (project): No CMAKE_C_COMPILER could be found

I'm trying make a Visual Studio solution with CMake to compile the latest version of aseprite and CMake keeps giving me the:

just mean that CMake was unable to find your C/CXX compiler to compile a simple test program (one of the first things CMake tries while detecting your build environment).

The steps to find your problem are dependent on the build environment you want to generate. The following tutorials are a collection of answers here on Stack Overflow and some of my own experiences with CMake on Microsoft Windows 7/8/10 and Ubuntu 14.04.

Background: CMake does support all Visual Studio releases and flavors (Express, Community, Professional, Premium, Test, Team, Enterprise, Ultimate, etc.). To determine the location of the compiler it uses a combination of searching the registry (e.g. at HKEY_LOCAL_MACHINE\SOFTWARE\Microsoft\VisualStudio\[Version];InstallDir), system environment variables and - if none of the others did come up with something - plainly try to call the compiler.

Background: Much the same as with Visual Studio. CMake supports all sorts of GCC flavors. It searches the environment variables (CC, CXX, etc.) or simply tries to call the compiler. In addition it will detect any prefixes (when cross-compiling) and tries to add it to all binutils of the GNU compiler toolchain (ar, ranlib, strip, ld, nm, objdump, and objcopy).

For Ubuntu, please install the below things:

This happened to me after I installed Visual Studio 15 2017.

The C++ compiler for Visual Studio 14 2015 was not the problem. It seemed to be a problem with the Windows 10 SDK.

Adding the Windows 10 SDKs to Visual Studio 14 2015 solved the problem for me. 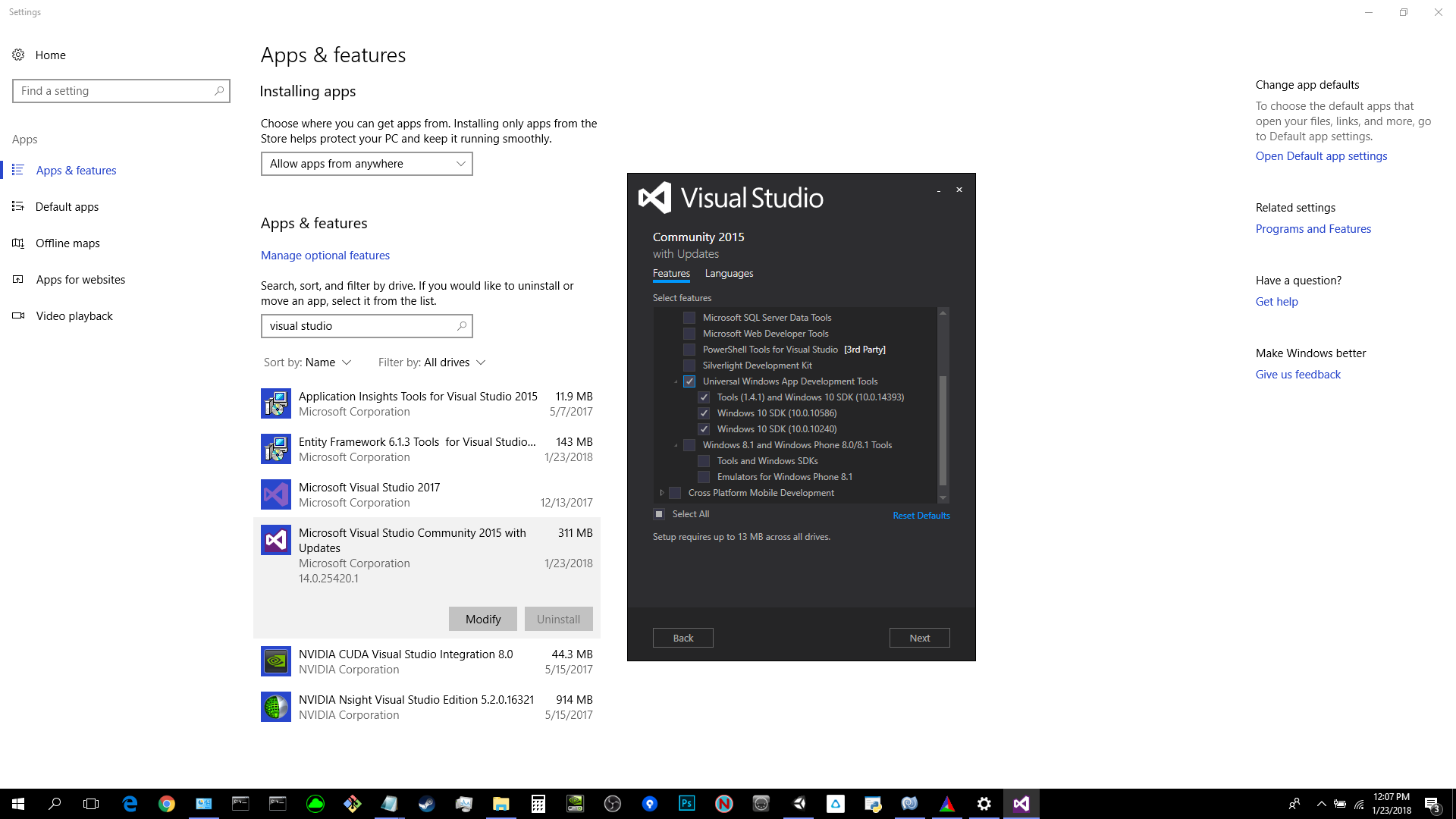 I also experienced this error when working with CMake:

The 'warning' box in the MSDN library article Visual C++ in Visual Studio 2015 gave me the help that I needed.

Visual Studio 2015 doesn't come with C++ installed by default. So, creating a new C++ project will prompt you to download the necessary C++ components.

I ran into this issue while building libgit2-0.23.4. For me the problem was that C++ compiler & related packages were not installed with VS2015, therefore "C:\Program Files (x86)\Microsoft Visual Studio 14.0\VC\vcvarsall.bat" file was missing and Cmake wasn't able to find the compiler.

I tried manually creating a C++ project in the Visual Studio 2015 GUI (C:\Program Files (x86)\Microsoft Visual Studio 14.0\Common7\IDE\devenv.exe) and while creating the project, I got a prompt to download the C++ & related packages.

After downloading required packages, I could see vcvarsall.bat & Cmake was able to find the compiler & executed successfully with following log:

I had the same errors with CMake. In my case, I have used the wrong Visual Studio version in the initial CMake dialog where we have to select the Visual Studio compiler.

Then I changed it to "Visual Studio 11 2012" and things worked. (I have Visual Studio Ultimate 2012 version on my PC). In general, try to input an older version of Visual Studio version in the initial CMake configuration dialog.

For me, this problem went away on Windows when I moved my project to a shallower parent directory, i.e. to:

I think the source of the problem was that MSBuild has a file path length restriction to 260 characters. This causes the basic compiler test CMake performs to build a project called CompilerIdCXX.vcxproj to fail with the error:

because the length of the file's path e.g.

CMake then concludes there is no CXX compiler.

None of the solutions here solves my problem - only when I install Windows Update for universal C runtime.

Now CMake is working and no more link hangs from Visual Studio.

You can also make sure you are the sudo user and you have READ/WRITE access on the directory you are working. I had a similar problem on OS X, and I got it fixed just by entering in sudo mode.

Just in case it helps any one like me in future:

The simple issue here is that the VC++ compiler (i.e cl.exe and it's dependent DLLs) is not visible to CMake. Simple. By making the VC++ folders containing those binaries visible to CMake and your working command prompt(if you're running Cmake from a command prompt), voila! (In addition to key points raised by others , above)

Anyway, after all kinds of fixes - as posted on these many forums- I discovered that it was SIMPLY a matter of ensuring that the PATH variable's contents are not cluttered with multiple Visual Studio BIN paths etc; and instead, points to :

b) and in addition, the folder containing a dependent DLL called (which cl.exe is dependent on): api-ms-win-crt-runtime-l1-1-0.dll - which on my machine is:

I get exactly the reported error if ccache is enabled, when using CMake's Xcode generator. Disabling ccache fixed the problem for me. Below I present a fix/check that works for MacOS, but should work similarly on other platforms.

Apparently, it is possible to use CMake's Xcode generator (and others) also in combination with ccache, as is described here. But I never tried it out myself.

I know this question is about visual studio 2015. I faced this issue with visual studio 2017. When searched on google I landed to this page. After looking at first 2,3 answers I realized this is the problem with vc++ installation. Installing the workload "Desktop development with c++" resolved the issue. 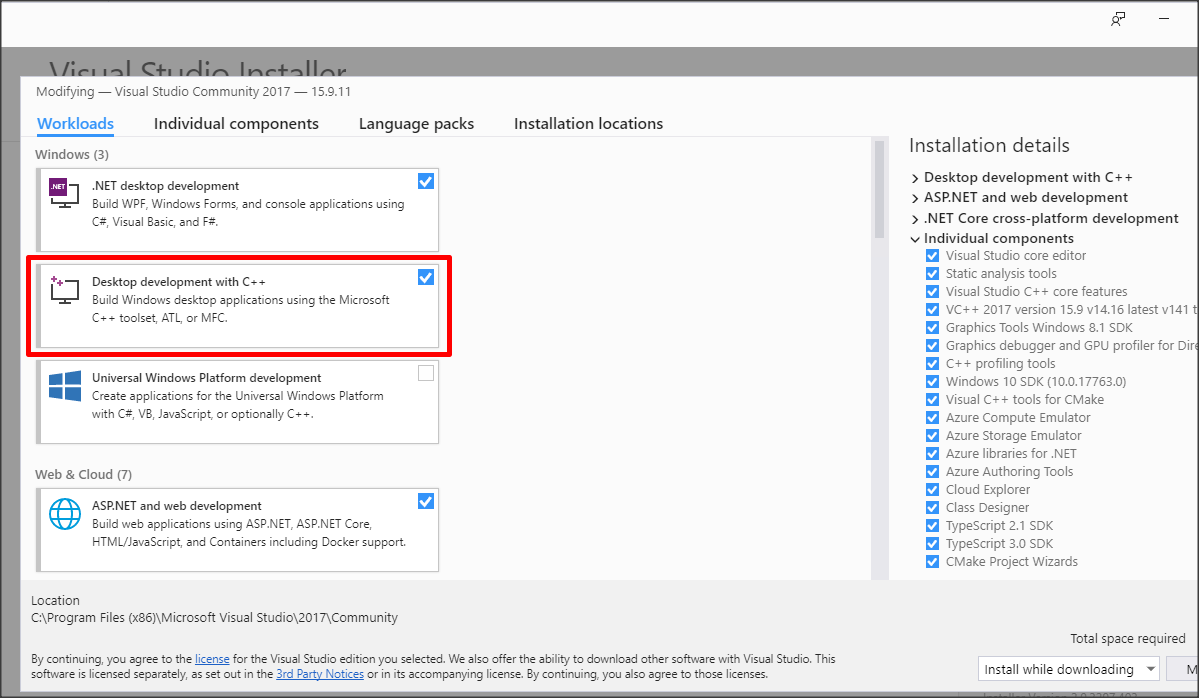 Make sure you have installed Windows SDK when you were installing Visual Studio. To add windows SDK you can go to Visual Studio Installer and hit "Modify" and then tick the checkbox of Windows SDK and install it.

I had the same issue with cmake-gui (No CMAKE_CXX_COMPILER could be found.), while running CMake from the command line worked fine. After manually adding the entries

to the PATH environment variable it worked for me.

For me it worked to use the Developer Command Prompt that comes with Visual Studio and then just cd to your/jcef/dir and run cmake -G "Visual Studio 14 Win64" ..

I was trying to install dlib on my machine and it gave me this error. The tutorial mentioned in the question leads to downloading visual studio 2017. I solved this by uninstalling VS 2017 and installing VS 2015

One can install VS 2015 via this stackoverflow thread : How to download Visual Studio Community Edition 2015 (not 2017)

Look in the Cmakelists.txt if you find ARM you need to install C++ for ARM

Visual C++ Compilers and libraries for ARM "Not Required"

No CMAKE_C_COMPILER could be found.

No CMAKE_CXX_COMPILER could be found.

Might disappear unless you specify c compiler like clang, and maybe installing clang will work in other favour.

You can with optional remove in cmakelists.txt both with # before enable_language if you are not compiling for ARM.

Not the answer you're looking for? Browse other questions tagged c++ visual-studio gcc cmake visual-studio-2015 or ask your own question.

0
Cmake responded in "-- Configuring incomplete, errors occurred!"
1
OpenCV error: No CMAKE_C_COMPILER could be found
209
How to download Visual Studio Community Edition 2015 (not 2017)
155
How to specify new GCC path for CMake
34
CMake error no CMAKE_C_COMPILER could be found using Xcode and GLFW
80
How to specify a compiler in CMake?
24
The CXX compiler identification is unknown
40
How do I tell CMake to use Clang on Windows?
26
Problems generating solution for VS 2017 with CMake
37
CMake on Windows
See more linked questions

1094
Error message "No exports were found that match the constraint contract name"
5
cmake error: The following Boost libraries could not be found
1
How to build aseprite executable
1
Error in Cmake "The C compiler identification is unknown"
34
CMake error no CMAKE_C_COMPILER could be found using Xcode and GLFW
1
CMake Error at cmake/modules/Findasio.cmake:11 - Failed to locate ASIO dependency