QT Creator, compiling and deploying a c or c++ to a remote device (BeagleBone or R pi)

I'm trying since days to write and develop programs on my host pc (Ubuntu 64bit) using qt-creator for my beaglebone and raspberry pi devices. I looked for 'qt-creator cross compile beagle, raspberry etc...' and it leads me to hundred of links and tutorial on how to compile qt-creator for my target plattform. But seriously, that not my idea. All what I want is to simply use my pc for developing my programs and lately deploy them to the remote device.

So first of all a noob question: Is something wrong with my idea? Should I really compile the source of qt for beaglebone or raspberry on my pc for writing programs which lately should be run on that devices????

I will not compile qt-creator again for another plattform, so I don't know how to find the right way. A lot of informations on internet are misleading.

So after many hours spend look for the right information I come up with the following procedure:

first I installed a arm-gnu toolchain on my 64bit Ubuntu.

then I installed qt-creator from the repository on my Ubuntu: 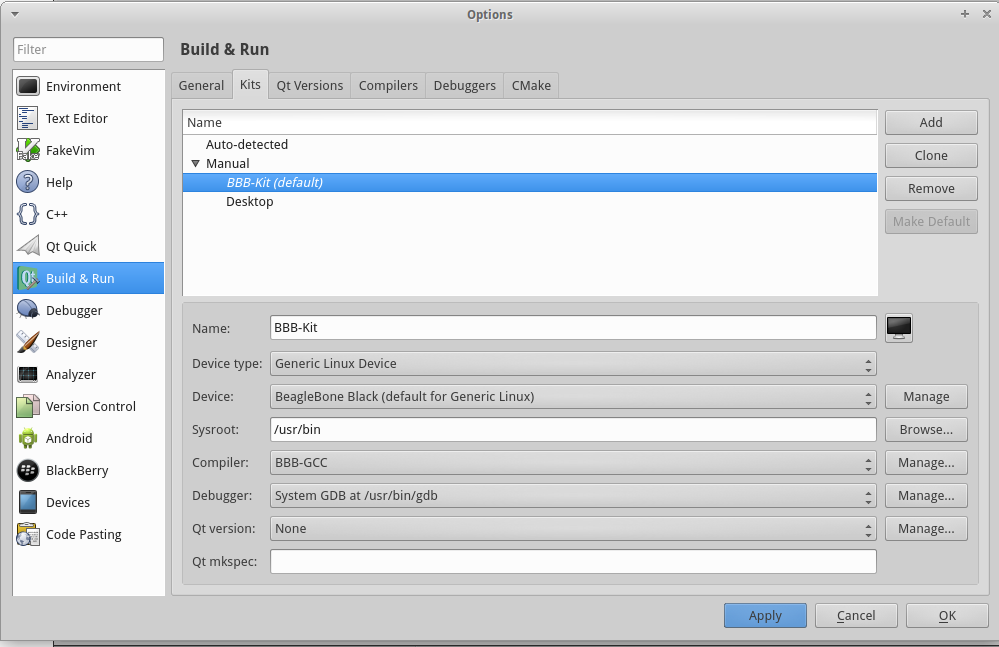 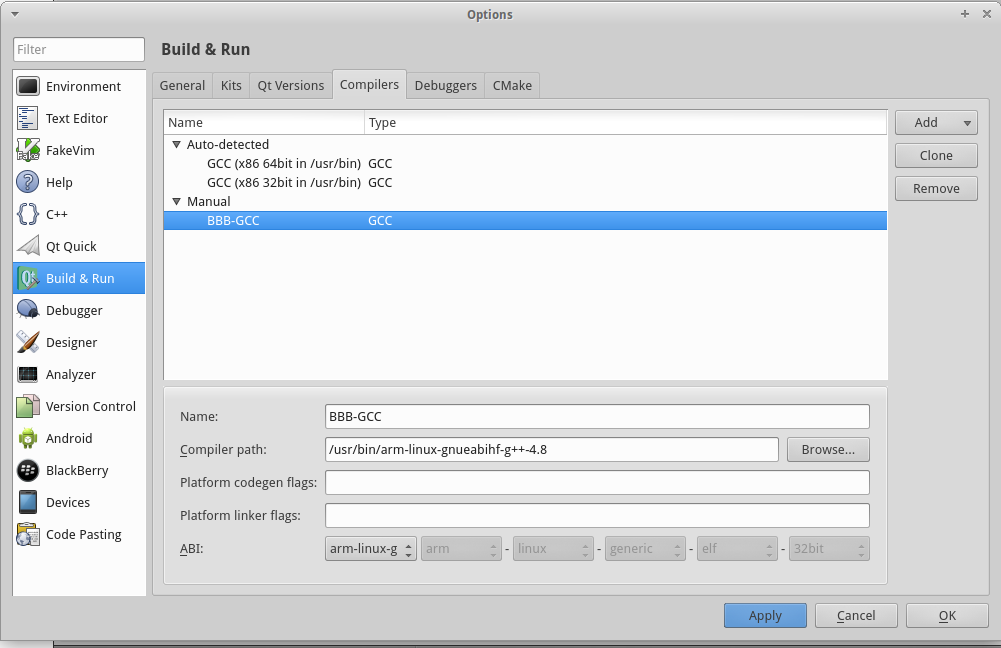 but it seems that qt-creator doesn't recognize the new kit when I start a new project: 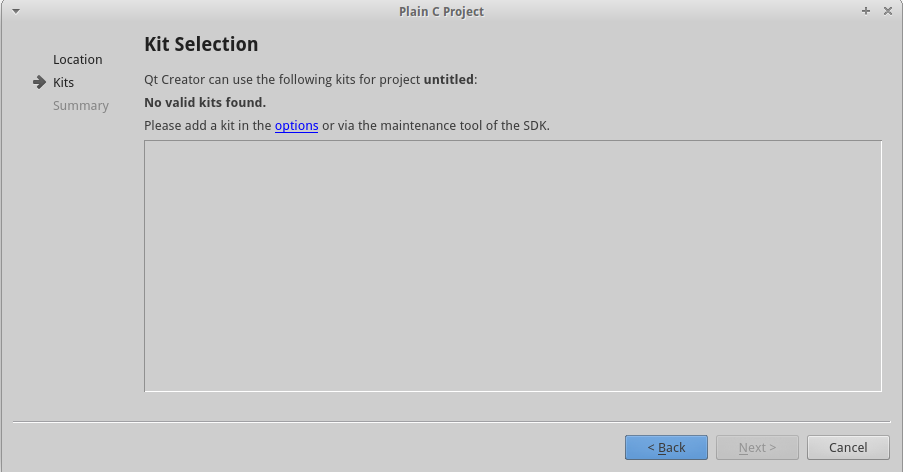 Now: I m really confused, I could think that the problem is related to qt, but I m not sure, whether the way of thinking, that I can compile on ubuntu 64bit and then run my application on the remote device is right or not.

For this reason it would be nice if you can answer the question above.

UPDATE: What happen if I add a QT-Version in my Kit???

It happens that the gnueabi compiler conflicts with that options and the following problem arises: 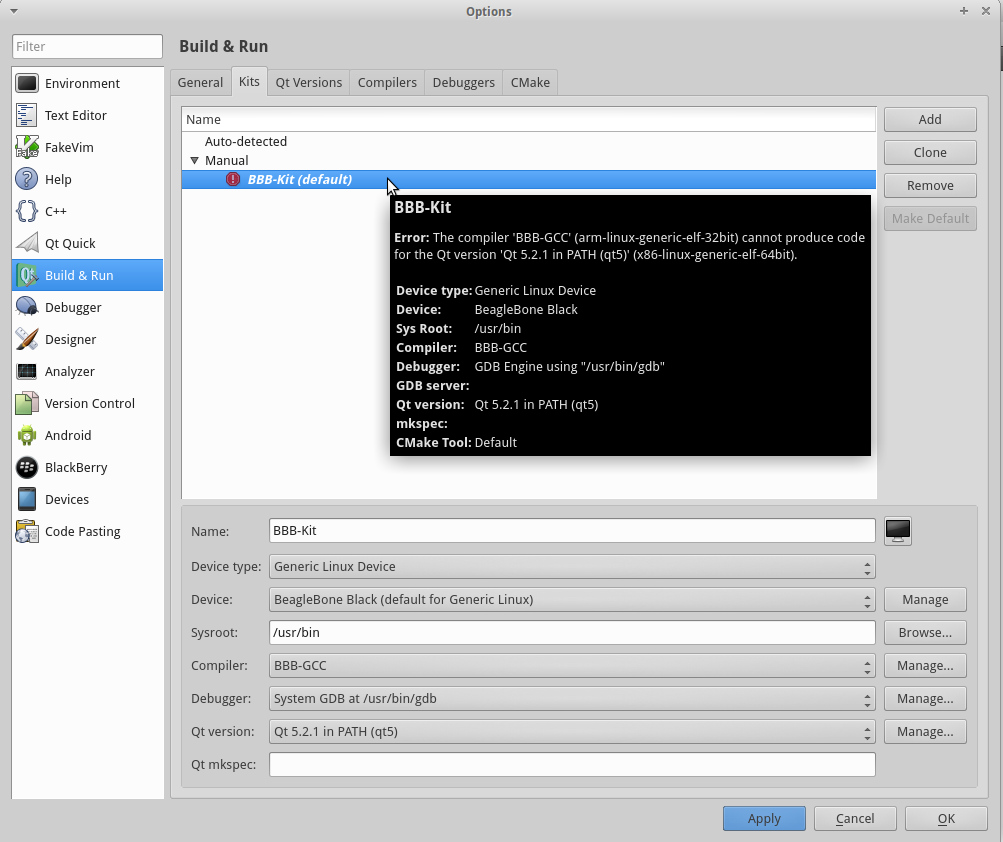 I would like to say again that I don't need to use qt-library or something like that on my remote device. I need just to use the qt-IDE as IDE for my projects (mainly c or c++ plain projects)

You need a complete toolchain

A toolchain is just a name for a group of things:

You are lacking a cross compiling qmake. Please see my answer at this other post.

It looks like before the update in the question, you didn't even have a valid kit, so there was nothing the IDE could do. You need to create a kit, and set Qt Version to None - because whatever Qt version you have installed is not for the ARM target. So, as long as it'll be none, it should work then, assuming that you have installed a full ARM toolchain for the target, including the Linux-specific bits - since you're not building a bare-bones application, but an application that will run on Linux.

When creating a new project, make sure to select Non-Qt Project, either C or C++, and choose the CMake build system (not qmake or qbs).

To test this out, start with creating a kit for your host platform, without selecting a Qt version (set it to None), and make sure you can create a simple C project and build it (choose proper compilers etc). Once you have done that, you should have an idea how to proceed with building for your ARM Linux targets. It really shouldn't be problematic at all (it all "just works" in my experience), so you probably didn't install something major (related to the target toolchain, nothing to do with Qt nor Qt Creator).

In Derek Molloy's tutorial for the Beaglebone on this subject, he mentions at around minute 18 that installing QT directly through the command sudo apt-get install qtcreator, won't install all the features of the QT app.

Not the answer you're looking for? Browse other questions tagged qt ubuntu raspberry-pi beagleboneblack beagleboard or ask your own question.

3
How do I prepare a Raspberry Pi with Raspbian so I can cross compile Qt5 programs from a Linux host?