What is the exact difference between relational algebra and relational calculus. At most of the reference, it will be

Relational algebra is procedural and calculus is non procedural.

So, what is these stands for. However, we can solve all the problems using relational algebra. Then why we would use relational calculus. Except definition, Explanation with example is much appreciated.

TL;DR: Queries calling RA (relational algebra) operators & queries of the two relational calculi (RCs) TRC (tuple RC) & DRC (domain RC) are different syntax for the same thing: a relation value or the property/condition that a relation value's tuples have to meet. As is SQL (a mix(up) of them). As is the predicate calculus, the language of precision in mathematics, logic, science (including computer science) & engineering (including software engineering). And RA as procedural vs RCs as declarative is a myth.

A relation holds the tuples that make some predicate--statement template parameterized by attributes--into a true proposition--statement.

A RC expression is set-builder notation for a relation value. It involves a predicate with relation variable/constant names, attribute names & values, predicate operators & quantified names (logic variables). The operators are AND, OR, NOT, FOR SOME/ALL and =. It is usually seen as requirements for the value to meet. But it also denotes the relation value that you get by evaluating the expression or a certain equivalent one.

The DRC has quantified names that are attributes. We use a shorthand for statements with one parameter per attribute:

The TRC has quantified names that are tuples. We dot a name to get the value associated with an attribute name in it. (Like for a field of a programming language record.) We use a shorthand for statements with one parameter (a tuple):

(A few variants on the originals of the RA and RCs are taught. Eg some identify arguments by order and others by name. Sometimes extra capabilities are added. Eg allowing a function call in a RC is as expressive as allowing a certain relation constant plus operator R RENAME A TO N in a RA.)

A RA expression's value is the tuples that satisfy the corresponding RC expression.

If we want to map from a RC expression to an RA expression on an operator-by-operator basis then we need extended RA operators: one generalizing UNION & one corresponding to NOT. Those aren't operators we would like to actually use in an implementation--the relations values returned are in a certain sense undesirably big. But every RC expression using them can be rearranged mechanically to a normal form that uses only basic RA operators.

(The myth may be helped because of the history of the words. "Modern algebra" has expressions with operators taking & giving values and can be calculated. "The calculus" aka analysis--differentiation & integration--has expressions describing values via impossible-to-calculate infinite limits & summations. We calculate in other ways, in general only calculating approximations.)

(Also, ironically: "The predicate calculus" is considered to specify things "declaratively" without regard to how they may be otherwise calculated or estimated. But the standard semantics/meaning of such an expression is given by following an algorithm that walks the expression tree. So it has an obvious "procedural" interpretation.) 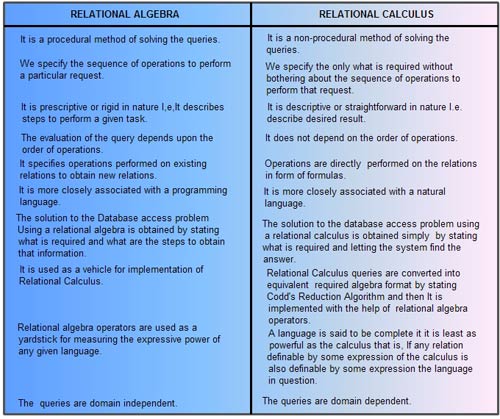 go to this link for detail. http://ecomputernotes.com/database-system/rdbms/relational-algebra-and-relational-calculus 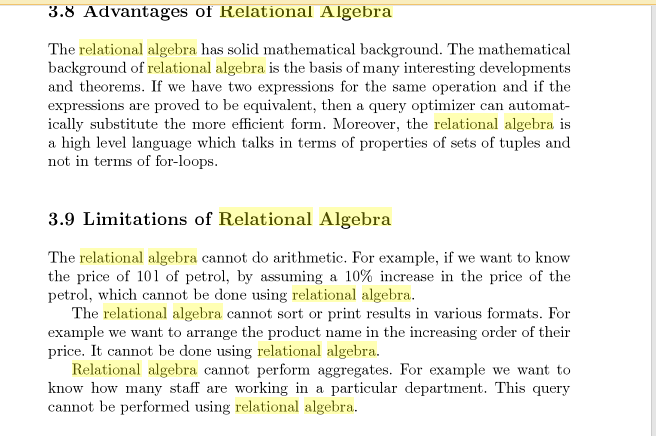 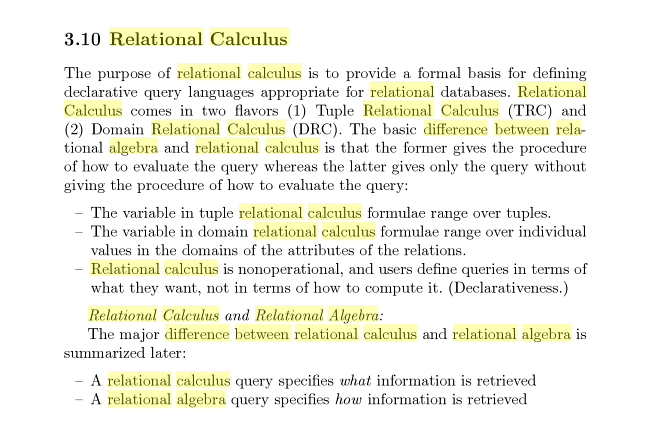 This presentation from an NYU class was pretty helpful to me. I'm just learning this as well so I can't be of too much assistance, but I at least know that relational algebra deals with more specific set expressions, join operations, and set combinations while relational calculus mostly sticks to AND-OR relations and either the existential ("There exists an x such that [condition(x)]) or the universal ("For all x's, [condition(x)]) quantifiers. I imagine relational algebraic expressions to be similar to an assembly language in functionality and specificity while relational calculus expressions are closer to a high-level programming language, in appearance and functionality. Hope this helps some.

In this relational calculus we can write the condition in any where like the below.

But in relational algebra, we have to find first what are the tuples have the year of publication is 2000, then only we have to extract the book name column.

Not the answer you're looking for? Browse other questions tagged relational-database rdbms relational-algebra tuple-relational-calculus domain-calculus or ask your own question.