I am attempting to return an object from a AWS Lambda function instead of a simple string.

I have already used the errorMessage for mapping error responses to status codes and that has been great:

Am I simply trying to do something that the AWS API Gateway does not afford?

I have also already found this article which helped: Is there a way to change the http status codes returned by Amazon API Gateway?.

Instead of calling context.done(err, res) you should use callback(err, res). Note that what was true for context.done still applies to the callback pattern.

Should also add that with API Gateways proxy and integration implementation this entire thread is pretty much obsolete. I recommend reading this article if you are integrating API Gateway with Lambda: http://docs.aws.amazon.com/apigateway/latest/developerguide/api-gateway-create-api-as-simple-proxy-for-lambda.html

context.done(error, result); is nothing but a wrapper around context.fail(error); and context.success(response); The Lambda documentation clearly states that result is ignored if error is non null:

What this means is that it won't matter whether you use a combination of fail/success or done, the behaviour is exactly the same.

I have tested every thinkable combination of response handling from Lambda in combination with Response code mapping in API Gateway.

The conclusion of these tests are that the "Lambda Error RegExp" is only executed against a Lambda error, i.e: you have to call context.done(error);or context.fail(error); for the RegExp to actually trigger.

Now, this presents a problem as, has already been noted, Lambda takes your error and sticks it in an object and calls toString() on whatever you supplied:

If you supplied an error object you'll get this:

Not very helpful at all.

The only workaround I have found thus far is to call

and then in my client do:

It's not very elegant but it works. As part of my error I have a property called "code". It could look something like this:

When I stringify this object I get:

Lambda will stick this string in the errorMessage property of the response and I can now safely grep for .*"BadRequest".* in the API Gateway response mapping.

It's very much a hack that works around two somewhat strange quirks of Lambda and API Gateway:

I am on my way to open a support case with Amazon regarding these two rather odd behaviours.

You don't have to use context.fail, use success but send different statusCode and an errorMessage, here is an example of how i format my output:

Use the consumer logic to handle different errors case logic, don't forget that you pay for the time your function is running...

You should replace the use of your context.fail with context.done and use context.fail only for very serious Lambda function failures since it doesn't allow more than one output parameter. Integration Response is able to match mapping template by performing regex on the first parameter passed to context.done this also maps HTTP status code to the response. You can't pass this response status code directly from Lambda since it's the role of API Gateway Integration Response to abstract the HTTP protocol.

context.done('Not Found:', <some object you can use in the model>);

and the Integration Response panel this setting: 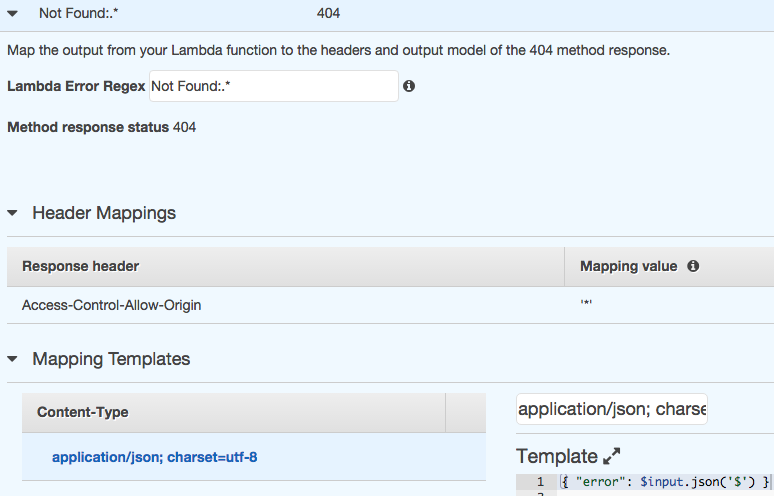 You can replicate similar approach for any kind of error. You should also create and map the error model to your response.

For those who tried everything put on this question and couldn't make this work (like me), check the thedevkit comment on this post (saved my day):

Reproducing it entirely below:

I've had issues with this myself, and I believe that the newline characters are the culprit.

foo.* will match occurrences of "foo" followed by any characters EXCEPT newline. Typically this is solved by adding the '/s' flag, i.e. "foo.*/s", but the Lambda error regex doesn't seem to respect this.

As an alternative you can use something like: foo(.|\n)*

Not the answer you're looking for? Browse other questions tagged http amazon-web-services aws-lambda http-response-codes aws-api-gateway or ask your own question.

94
Is there a way to change the http status codes returned by Amazon API Gateway?
4
AWS API Gateway returns 200 even if Lambda returns error