How can I map Command S to :w in vim?

I have tried everything from other threads but nothings seems to work in Mac OS X El Capitan.

This supposedly worked in previous versions, but I tried it, and had no success.

Note that this will only work in MacVim. The Command key isn't passed to terminal applications.

The answer from romainl put me on the right track but unfortunately did not work for me (OS X Sierra, MBP 2017). Also using the (arbitrary) key F6 as intermediate mapping:

Add the following line to your ~/.vimrc:

Is totally possible to map cmd+s or any cmd combination by using Iterm2 and a custom map key map binding.

So, to map cmd+s to save in terminal vim you first need to make a change in Iterm2 configuration: 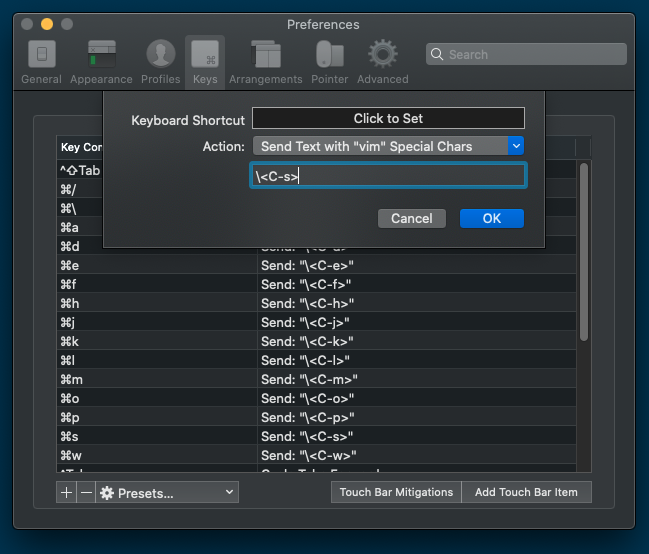 Note that Iterm2 will convert the keystroke cmd+s to ctrl+s and send it directly to vim. So you can make some other things with this in mind. For example, you can disable cmd-w (which normally will close the window in Iterm2) and send directly to vim as <C-w> to split windows, in this case you don't need to change anything in the vim side, only map <cmd-w> to \<C-w> in Iterm2. Additionally, you can disable cmd+p to prevent the annoying Iterm2 print dialog and call :fzf o something like that in vim.

The only downside is that you need to create all the maps individually:

Btw, if you want to map some "really special" keys like cmd+/ (for example to comment lines with NERDCommenter), you need to do a slightly different keymap by using the "Send Scape sequence" action:

and then, in vim, set the map for the ^[/ keystroke (note that the special ^[ symbol is made by pressing <ctrl-v> and then <esc>).

1195
How to effectively work with multiple files in Vim
2298
How to replace a character by a newline in Vim
1875
How to duplicate a whole line in Vim?
5794
How do I execute a program or call a system command?
2233
Vim clear last search highlighting
1436
What's a quick way to comment/uncomment lines in Vim?
1917
How to do case insensitive search in Vim
1646
How does the vim "write with sudo" trick work?
1341
What is the difference between the remap, noremap, nnoremap and vnoremap mapping commands in Vim?
4851
How do I exit Vim?